Nashville has a strong transportation infrastructure that includes the Nashville International Airport. 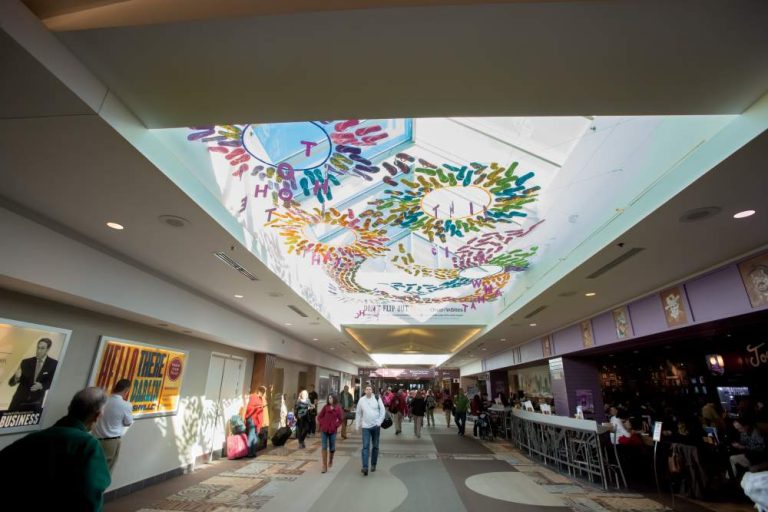 Walk through many airport terminals in the U.S., and you might not know what city you’re in, but Nashville International Airport (BNA) certainly has a Music City flair.

“We want passengers to immediately know they’re in Nashville when they enter our terminal,” says Emily Richard, vice president of strategic communications and external affairs at Nashville International Airport. “Adding to that theme is that we feature live music acts on a couple of stages in the terminal for passengers and visitors to enjoy. We’ve had live music at the airport for the past 25 years.”

A focus city for Southwest Airlines, the airport offers 380 daily flights, including nonstop connections to New York, Los Angeles, Cleveland, Newark, Pittsburgh, Boston and Seattle. Strong air service is a key reason why Nashville has become a popular corporate headquarters destination over the past decade.

“In 2012, we served more than 10 million passengers for the first time since American Airlines had a hub here in the early 1990s,” Richard says. “We recently enhanced our parking areas and our walk-to rental car facilities, added a USO center because we are geographically near Fort Campbell’s Army base and opened a CareHere health-care and wellness store. You can actually get a flu shot at Nashville Airport.”

Readers of Travel + Leisure even rated BNA as one of the most efficient airports in the U.S., thanks to the ease through which passengers can check into flights and get through security smoothly.

Roads, Rail and a River Port

Along with an international airport, Nashville offers other logistical advantages for business. The city is located at the convergence of three major interstates – I-24, 40 and 65 – and that access is especially important to distribution companies, putting them within 600 miles of 24 states and 50 percent of the U.S. population.

“The three major interstates allow logistics companies to conveniently get to a lot of places from Middle Tennessee,” says Janet Miller, chief economic development officer with the Nashville Area Chamber of Commerce. “Music City also has I-440 Parkway, a downtown loop and Briley Parkway to link several of our urbanized areas, while State Route 840 connects four counties in an outer loop.”

A total of 140 freight carrier companies and 150 truck terminals have operations in Nashville to ship products for hundreds of local companies, including supply chain leaders like OHL and Performance Food Group and corporate giants such as Amazon, Bridgestone, Nissan, Dell, Gap, Hollister, Saks Fifth Avenue and Starbucks.

Additional transportation assets include Class I rail, with CSX operating two major rail yards as well as an intermodal terminal for transferring cargo to-and-from trucks. Those facilities allow Nashville to be more competitive for projects, especially when hauling by rail is a requirement for prospective companies looking to relocate or expand.

Nashville also has a river port, thanks to its location on the Cumberland River. Its nine-foot navigation channel offers barge-shipping access to the Ohio River, the Mississippi River and Gulf of Mexico.

Miller adds that a big push is underway in Nashville to get aggressive with mass transit.

“Bus rapid transit is currently under debate, and the leadership of Nashville knows that economic development depends on attracting a lot of right-out-of-college young people, many of whom don’t want cars – they want to travel via mass transit,” she says.

The Chamber is part of a city-wide coalition supporting The Amp, a proposed 7.1-mile bus rapid transit route that would start at the Five Points area in East Nashville and extend to the Saint Thomas Health campus in West Nashville, providing service through the city’s main downtown corridor along Broadway and West End Avenue.

Nashville launched a passenger commuter rail system called the Music City Star several years ago. The current operational leg of the system connects the suburban city of Lebanon to downtown Nashville at the riverfront.