The region's enduring appeal and resiliency make it the perfect place to write your story. 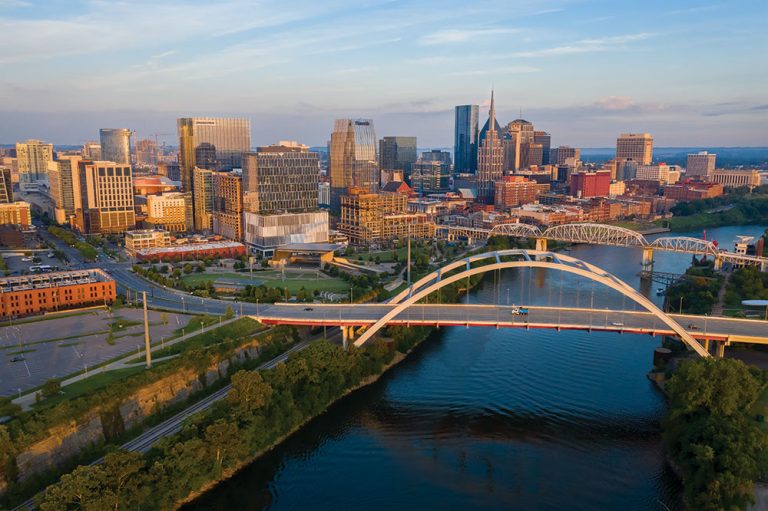 Whether you’re the founder of a startup, head of a multimillion-dollar company or an individual interested in leveling up in your career, the Nashville region is where you will want to write your story.

‘Everybody Was My Neighbor’

When compared to other regions, Nashville’s positive qualities make it hard to pass up. With a low tax rate, a pool of young talent, a low cost of living, no state income tax and a per capita income that is higher than the national average, it’s no wonder the area is so attractive.

“That’s kind of it at first glance, and then when people come here to really find out more about Nashville, I feel like it’s the people that really differentiate us,â€ says Melia Leedy, vice president of economic development for the Nashville Area Chamber of Commerce.

I Believe in Nashville and You Should, Too

The region’s residents and positive qualities are what have helped the area remain steadfast during times of trouble.

For example, Nashville weathered a catastrophic flood in 2010, during which 13.6 inches of rain fell in 36 hours, damaging properties and homes. A tornado in early 2020 with winds of up to 175 miles per hour, destroyed homes, took away lives and left several neighborhoods in Nashville and communities in the region in shambles. More recently, the COVID-19 outbreak again showed the region’s resiliency, as neighbors rallied around each other.

“Just looking back, I was here during the flood, and it felt like everybody was my neighbor and they wanted to help and volunteer,â€ Leedy says.

During the 2010 flood, the volunteer coordinating organization Hands On Nashville said 22,000 people donated 91,000 hours to flood recovery over a six- to seven-month period.

“I feel like it was the same during the tornado,â€ Leedy says. “‘Nashville Strong,’ really rings true for everything.”

Despite these challenges, Nashville’s resiliency has encouraged people and companies to continue to stay in the area and enticed others to move here.

Some of the world’s best-known brands have set up headquarters or major operations in the region, including Amazon, Asurion, Bridgestone Americas, Nissan North America, HCA, Tractor Supply, Dollar General and AllianceBernstein.

Even during a period of economic disruption, companies continued making a footprint in the region. Spirit Airlines, marketing technology company CloudOne and mobile app developer Thnks are planning a significant presence here.

QTC, which provides disability and occupational health examination services for veterans, federal employees and the commercial industry, invested approximately $5 million to establish an operations center in the region.

Additionally, SmileDirectClub announced it will expand its operations by adding a $34 million manufacturing center in Columbia; Facebook is planning to invest $800 million in Gallatin to build a data center; and Amazon revealed it will establish an 855,000-square-foot fulfillment center in Mt. Juliet.

The entertainment industry, which attracts millions of visitors each year, also continues to grow.

“If you really take a look at Nashville and what it brings, it’s an experience on Broadway like nothing else in the world,â€ says Bill Miller, the CEO of Icon Entertainment Group, which owns numerous entertainment attractions downtown.

Leedy says since Nashville has built its brand for so many years that it’s no surprise that it continues to be a vibrant place for business.

“We were doing so well before everything happened with COVID-19 that, you know, people still know about us and still want to come here,â€ she says.