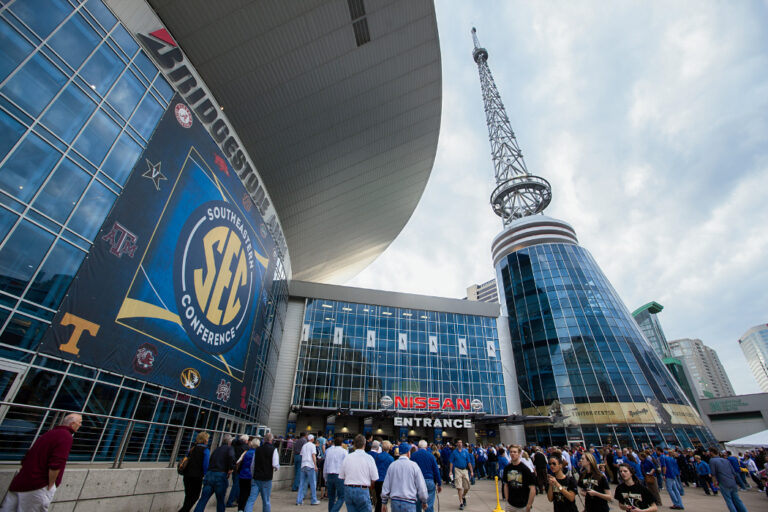 Bridgestone Arena means big business in Nashville. Located on Nashville’s historic and well-known Broadway Ave., Bridgestone is the place for big crowds and high-energy entertainment. This venue hosts the Nashville Predators hockey team as well as concerts and events that range from the circus to monster truck shows.

Opened in 1996, Bridgestone Arena brings locals and tourists together to attend events or tour this massive complex. Aside from hosting events, it’s home to the Tennessee Sports Hall of Fame, an XM Radio studio, and the Nashville Convention and Visitors Bureau. On the lower level, you’ll find food and drink options, souvenir kiosks, and escalators quickly take you up to the second levels. Seat prices and availability depend on the event, however premium seats and boxes are available most shows. The Lexus Lounge is a private gathering spot for 450, while 72 suites on two different levels provide a more intimate setting.

Dining spots inside the venue include the Patron Platinum Club, catering by Levy Restaurants in luxury suites, and Pucks n’ Pints offers upscale concessions for those in premium suites for Predators games. Because Bridgestone sits on Broadway in downtown, a strip full of shops and restaurants, it’s easy to park a couple of blocks away, eat, and walk to a show.

In 2015, Pollstar Magazine, which focuses on reporting for concert, sports and entertainment, named Bridgestone Arena the Arena of the Year. Pollstar data also ranks Bridgestone second in the U.S. and fifth in the world for concert ticket sales. Note: Concert ticket prices can get pretty steep depending on the show, but it’s well worth it. There’s not a bad seat in the house.

Bridgestone is a great live music venue if you’re into large crowds – think 20,000 fans – and being indoors. Big-name artists and bands play Bridgestone, and many times there are double or triple headliners. Hard rock bands who have played the arena include Avenged Sevenfold, Korn, Rob Zombie and Alice in Chains. It’s not only for headbangers though. The upcoming calendar for 2015 includes The Who, Imagine Dragons, Tim McGraw, Ariana Grande and the Foo Fighters, and past performances range from Katy Perry to Eric Church.

The Nashville Predators, who began in Nashville in 1998, are based at Bridgestone and enjoy dedicated fans and support. The Predators hold the fifth-highest points earned in the NHL and have consistently made the playoffs. More than 17,000 hockey fans can enjoy a fast-paced game, and season tickets are available.

WWE superstars regularly comes to the arena as well, and wrestling fans can attend a WWE Raw or Smackdown show. In 2014, Bridgestone hosted its first WWE Pay Per View in more than 12 years. Meanwhile, basketball fans can get tickets for the SEC Men’s Basketball Tournament, first and second round of the NCAA’s men’s tournament, and the NCAA Women’s Final Four.

Kids have a lot of opportunities at Bridgestone as well. For younger crowds, Sesame Street Live, with fan favorites like Elmo and Cookie Monster, usually comes once a year, as well as the Nitro Circus, and Ringling Bros. and Barnum & Bailey, Disney on Ice, Marvel Universe Live (although adults love that, too). If parents want to leave the little ones with grandma, they can check out one of the many comedians who perform at Bridgestone. Kevin Hart and Dave Chappell have recently visited, and 2015 will welcome Black and Brown Comedy Get Down with Cedric ‘The Entertainer’, Mike Epps, Eddie Griffin, D.L. Hughley, George Lopez and Charlie Murph.