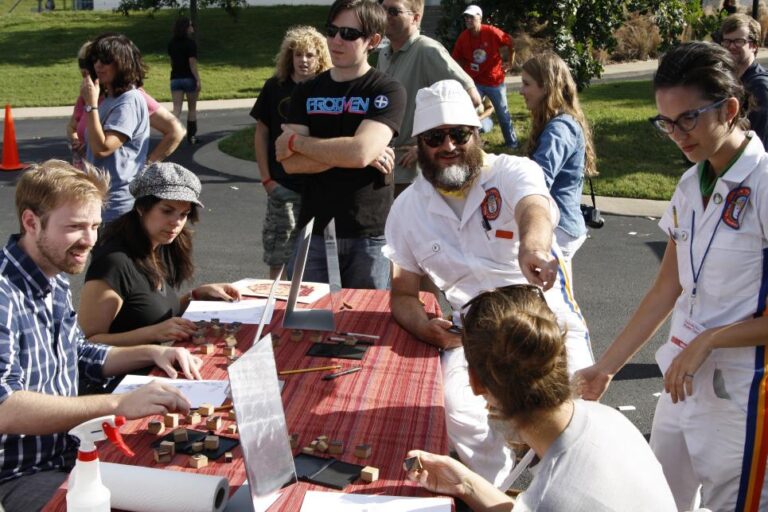 Photo courtesy of Our Town Nashville

As government officials, community leaders and residents came together to begin sketching a plan for the future of Nashville, Tenn., over the next 25 years, local artist Bryce McCloud saw an opportunity for the city to take a long, hard look at itself.

He knew that since a city’s image can only come from the people who call it home, there had to be a way to capture Nashville’s various walks of life. So as a participant in some of the meetings held for what is known as NashvilleNext, McCloud envisioned how art could play a key role in helping the city develop in the coming decades.

“You know when you do a self-portrait, it’s kind of a reflection of where you are as a person,” says McCloud, who launched the public art project called Our Town in July 2013 after receiving a grant from the Metro Arts Commission. “And I see the whole project as a kind of reflection of where we are as a city. That’s why I’m really trying to get as many different voices and images as I can. I think one of the great things that art can do is be a lens to help us reflect on who we are and who we want to be.”

To get these different perspectives, McCloud, who owns a Nashville letterpress print shop called Isle of Printing, takes a bike cart full of art supplies and a team of four assistants to locations and events throughout the city. Once the Our Town crew sets up shop, people are pulled in and given instructions on how to do the self-portraits.

The process allows residents to display their creative talents in a unique way and perhaps release some inner feelings. When they’re finished with their self-portraits, which are done using mirrors, ink pads and rubber stamps of varying shapes, participants have their photos taken with their work of art for displaying on the project’s website.

They can then choose to take a print made from someone else’s self-portrait, with the idea that they’ll take it home and maybe hang it on their wall, or otherwise share with family and friends. It’s sort of the concept of viral before there was Twitter.

“One of the things I want to do is to really engage people because I think if you get people out of that passive role and have them participate, it causes them to really look carefully and be a studious observer,” McCloud says. “You start being able to see the subtle distinctions of things in your world, and that leads to a healthier community.”

Phase one of the Our Town project was to have ended after a year, and McCloud says the next step is to present the collection of the self-portrait prints to the city at large. Instead of hanging in an art gallery, however, the prints will likely be displayed on the sides of buildings, at bus stops and other nontraditional locations.

“My goal was to involve as many Nashvillians as I could,” McCloud says, “so that it truly feels like it’s their artwork we’ll have as a collective piece of art.”