A look at the changes in growth and their demographic inspirations that are making Nashville more vibrant and welcoming for tourists and residents alike. 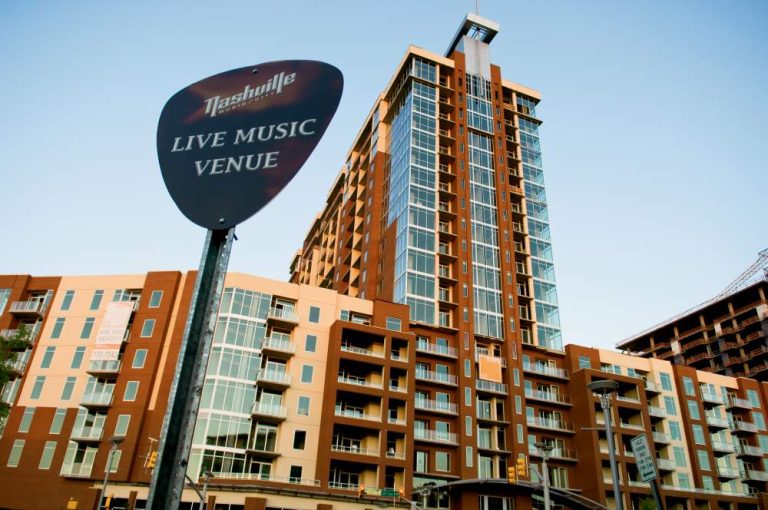 Music City’s downtown has changed its face over the past few years, expanding to meet the needs of a growing, younger population and an influx of visitors from around the world. The spacious new Music City Center convention center is one of many developments reinvigorating the area and contributing to a greater demand for office, hotel and living spaces in and around the city’s urban core.

This growth has spurred further expansion of entertainment and culinary offerings, as new residents and urban professionals look to make the best use of off hours. Especially influential are the city’s rising population of Millennials and Gen Xers who want to live and socialize near work and avoid lengthy commutes from the suburbs.

Since the opening of the  Music City Center in May 2013, confidence in building downtown has skyrocketed, says Tom Turner, president and CEO of the Nashville Downtown Partnership. Turner points to the boom of exclusive boutique hotels, including the Omni Nashville, 404 Hotel and Kitchen, and the Hyatt, as well as the Hilton Garden Inn, opening in spring 2015, and many more in the development or construction stages, including hotels for Virgin, Marriott, Westin, Thompson and 21C Museum.

“There’s been a significant amount of construction in a confined geographic area,” Turner says. “Market forces are really supporting the expansion. We need office space, and we’ve got the HCA tower that just broke ground and the new offices at 1201 Demonbreun. We’ve also got more than 1,200 residential units under construction, with 1,900 more planned.”

While that may sound huge, Turner notes that Nashville needs a minimum of 700 new units a year to keep pace with growth.

“We’ve got a 98 percent occupancy on rental properties, and a very small, maybe two-month, supply of ownership properties,” he says. “It’s a huge seller’s market out there, and that generates more interest in the projects getting built.”

A leader among Nashville’s original thinking young residents, Britnie Turner, CEO and founder of Aerial Development Group, aims at smart growth, revitalizing blighted areas throughout the city and supporting new development with a model driven by a philanthropic vision that preserves urban neighborhoods for less affluent residents, while encouraging transition. Aerial also works to add livable qualities to those neighborhoods, including greenways. Turner tries to redevelop as much as possible in each neighborhood, often cleaning up streets and making areas greener, more beautiful and appealing. Aerial partners with Horizon Initiative to donate a portion of its profits from each sale to building self-sustaining orphanages in Africa.

The real estate boom in downtown Nashville is also taking its cue from a business boom driven by a growing roster of corporations relocating to the heart of the city. Sony/ATV is moving its headquarters from Music Row into expanded digs in the Gulch, while Bridgestone Americas is relocating its headquarters to a 30-story office tower planned for the SoBro district – a move that will bring 1,700 jobs downtown.

The city continues to make its name not only in music, but also in creative culinary and social offerings. From the presence of restaurants manned by nationally acclaimed chefs like Sean Brock’s Husk to new arrivals like the Nashville branch of New Orleans’ famed Couchon Butcher in Germantown, Nashville is becoming a foodie city. Adding to that buzz is Top Chef star and Chicago native Dale Levitski’s daring move to open his restaurant, Sinema, in the former Melrose Theater – bringing charm to the expanding Melrose-Berry Hill area.

Perhaps the most exciting new venue is City Winery – the fourth outpost for the brand, after New York and Chicago – located in SoBro. City Winery, says GM David Richter, aims to fit a different demographic than other music and entertainment venues in town, providing an adult atmosphere where all things culinary and potable are readily available. Along with live music in a room designed for accessible tuning and listening, City Winery offers exceptional wine, including originals made from grapes around the world that are crushed and fermented locally, then served via its exclusive tap system for freshness.

Supplementing Music City’s myriad of museums, galleries, music and sports venues, the exciting mix developing downtown means not only more business, but also more residents and tourists eager to explore what Nashville has to offer.