Find out what makes Nashville one of the fastest-growing communities in the U.S., and learn more about the city’s many resources and advantages for young professionals. 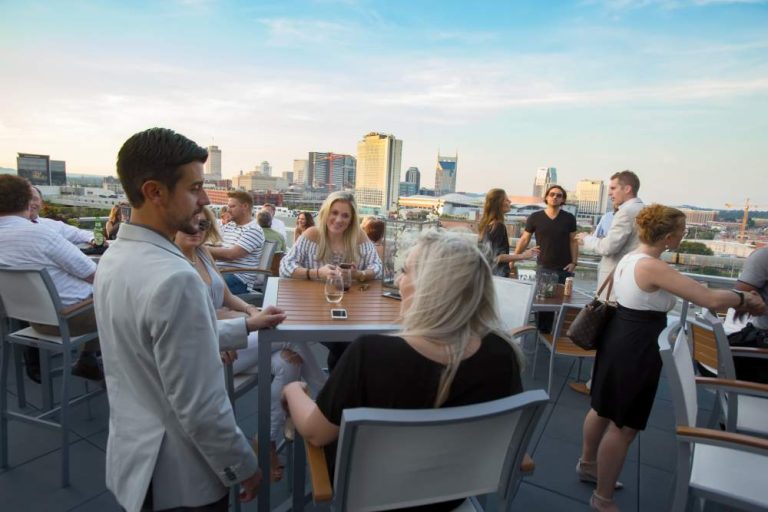 It’s no secret that Nashville is one of the fastest-growing cities in the U.S. – approximately 1,500 people move to the area every month and many like it so much, they never leave. Although it’s impossible to discern why everyone who puts down roots in Music City does so, it’s safe to say the region’s hot job market, welcoming atmosphere and high quality of life are a few compelling reasons.

“Nashville is an awesome town,” says Erin Tomlinson, national SMB sales director for Eventbrite’s Nashville sales team. “There’s still a small-town feel even though it has all the benefits of a big city. It’s also a great place to raise a family, and it’s definitely a place I want to stay.”

Headquartered in San Francisco, Calif., Eventbrite – the world’s largest self-service ticketing and registration platform – added a sales team to its Nashville operation in 2016, joining its local customer support and engineering teams. Tomlinson says the company has acquired nearly 50 sales employees since growing its Nashville presence, many of whom are recent college graduates. In total, she says Eventbrite’s Nashville operation employs approximately 150 people.

“The cost of living is very affordable in Nashville, and we knew that our employees would be able to have a nice lifestyle here,” Tomlinson says. “There are also several colleges and universities in the area, which offer perfect opportunities for recruitment. Plus, we’re in the events business, and there’s a lot happening in Nashville right now – we wanted a hub in an active place.”

Lyft, a mobile app and transportation company also based in San Francisco, relocated its customer support operations from the Bay Area to downtown Nashville in 2015 – another boon to the city’s growing technology sector. In addition to its 35,000-square-foot customer support office, Lyft opened a 3,000-square-foot driver center, adding up to a $5.1 million investment and the creation of approximately 400 jobs. According to Lyft spokeswoman Katie Dally, the company found Nashville appealing due in part to its relatively low cost of living and pro-innovation atmosphere.

Music City’s young professionals can easily find their place in the business community through groups like YP Nashville, a partnership between the Nashville Area Chamber of Commerce and 50 young professional organizations in the Middle Tennessee region. Now in its second decade, YP Nashville works to connect members with those organizations for networking, professional development and community involvement purposes, and the group helps newcomers find employment in the area.

“YP Nashville reaches about 30,000 young professionals annually,” says Alex Hughes, vice president of talent attraction and retention at the Nashville Area Chamber of Commerce. “We’re designed to be the go-to hub for anyone relocating to the Nashville market, those who are coming out of college and looking to stay in the area, as well as people who are just interested in getting plugged in as a young professional.”

YP Nashville and the Nashville Chamber also support young professionals by sponsoring the annual Nashville Emerging Leader Awards, which recognize young people for their career achievements, leadership and community impact. Five finalists are chosen in 15 industry classifications by a committee of community leaders and experts in each industry, and one winner per category is selected.

Erica Rains, who owns The Chef and I with her husband, Chris Rains, was a 2016 Nashville Emerging Leader Awards honoree in the Hospitality & Tourism category. Open since 2011, The Chef and I has grown into an interactive restaurant with a large catering division that serves 350 offsite events each year, and it operates a successful cooking class program.

“We have Nashville to thank for a lot of our success,” Erica says. “The economic vibe here right now is one of support, and I think everyone feels a responsibility to support small businesses like ours. My husband and I believe Nashville is one of the most amazing, supportive and resilient communities we’ve ever known; it’s a dynamic, forward-thinking city – and it’s a lot of fun.”