The 5 Best Burgers in Nashville, TN 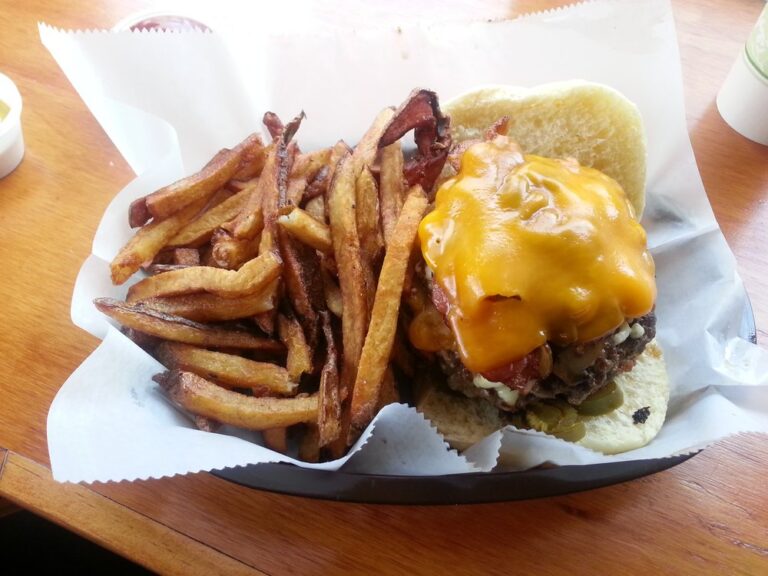 Courtesy of Yelp user Rod B.

Some time in the past five years, Nashville became renowned for a dish called “Nashville Hot Chicken,â€ which is essentially just fried chicken with spices mixed into the batter. It’s such a thing these days that even KFC has jumped on the bandwagon, offering the equivalent of what Memphis must feel like when Chili’s promotes Memphis-style BBQ ribs.

But lost in all the hot chicken scuffle is the Nashville hamburger, which is kind of like the Salieri to hot chicken’s Mozart–that is, except for people like me. I don’t really like spicy food, and I’m too cheap to order nicer things on menus, so I’m often left asking waiters, “I don’t see a hamburger on here. Do you have one?â€

This has left me with a pretty respectable grasp on the burger landscape in Nashville. Through the years, I’ve had them all: the new and the classic, the experimental and the basic. And these–picked from establishments both old and new–are what I consider to be the five best in Music City.

I found this place almost by accident in 2010. One of my first writing gigs was in a warehouse in this area (Houston-Wedgewood), and needing something different from my regular $5 Footlong from Subway, my editor suggested trying Gabby’s. I was immediately hooked. If you want grass fed beef, hand-cut fries, all tossed together in a brown paper sack, this is your place. Plus, the owner is just a great guy. My advice? Try the Seamus ($6.99).

People often forget PM when discussing the best burgers in town. Perhaps because with the near-tidal wave of new eateries, including the many food trucks swerving in and out of parking lots, the older Nashville establishments tend to get drowned out. But don’t be dissuaded: PM’s hamburger is one of the best. While I’m not sure what exactly they mix into the beef, it tastes a bit like Korean BBQ sauce, with a little bit of a kick. Add on some of their signature wasabi mayo and in you’re in for one of the most unique/best burger rides of your life. And when they ask you which side you want? Get the steak fries. They’re seriously some of the best in town. ($9.50)

The first time I went to The Pharmacy, a bird…well…dropped something on my hand.

I mention this for two reasons: One, as a warning against sitting in the beer garden. (Though, I’ve sat in it multiple times since without any issue.) And two: Because, even with that, it didn’t detract from the nearly transcendent experience I had with that burger.

Here’s what I think they do right:

Yes, the meat is incredible. Yes, they have amazing fries. But for me, The Pharmacy burger experience is all about the buns they use, which are made fresh daily. Think of it this way: If music is about the space between the notes, then a great burger is about the space around the meat. And they do that part beautifully.

I don’t have a specific burger recommendation; just go there and choose one. I promise you’ll be thrilled. (Burgers range from $8.50-12.00)

You wouldn’t think a coffee shop would be a great place to have a burger. But Fido in Nashville’s historic Hillsboro Village never fails. Again, like all of these, they use quality beef (and lamb in this one!) and ingredients. But I think the difference for me is the fig aioli they put on top of it. Sounds strange, I know; however, it’s a delicious digression from the norm. (The Local Burger $13)

Whiskey Kitchen has ridden the roller coaster of cool the past six years. When it opened, it was one of the first places of its kind, and everyone hung out there. Then more places like it opened and it wasn’t so cool anymore; in fact, it became the kind of place you judged people for visiting. Now, though, it’s kind of cool again, partially for sentimental reasons (“This is where we used to get crazy in ’10.â€) and partially because their burger is still INCREDIBLE. So, try it – you won’t be disappointed. The Kayne Prime Burger ($11.75).