Skip to content
Home > TN > Nashville > Love Where You Live > Living the Dream: I’m a Mural Artist in Nashville

Living the Dream: I’m a Mural Artist in Nashville

“Bored one summer, I painted a mural of some tomatoes on a building, and it snowballed from there.” 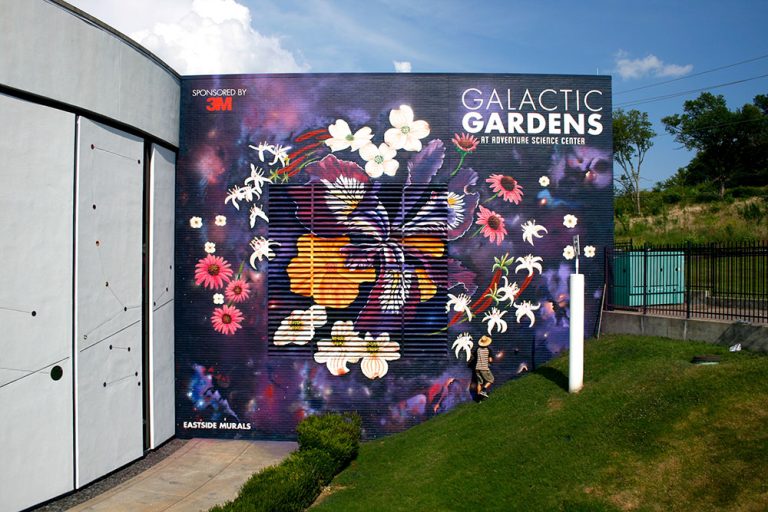 Today we’re talking to Ian, a muralist in Nashville, TN.

Have you always been into art? How did Eastside Murals originate?

I’ve been interested in art since pretty early on. I specifically remember an art project in elementary school where I was drawing an interstate scene and realized I could actually make a tractor trailer look semi-realistic. In high school I started painting graffiti with some friends, and got pretty good with a spray-paint can, which is really what led to painting murals.

At what point did you all decide to turn Eastside into a business?

There was never really a decision where we decided to do this for a living, it happened pretty naturally. Bored one summer, a childhood friend and I painted a mural of some tomatoes on a building in East Nashville. We put our number on it, and got a few calls later on, and it snowballed from there on. I’d say we’re still in the midst of the transition into a legitimate business. We have plenty of work, but we’re still figuring out the technical aspects like taxes and insurance.

What did the early days of Eastside look like and was there one particular moment or project that helped you all blow up?

We were both in different colleges during the early days, so we would mainly just work during the summer. Toward the end of school, I was taking calls from clients between classes and trying to juggle school projects in Chattanooga and work projects back home. Our first big project was for an auto-diesel college in East Nashville, and that’s when I realized I could actually make money doing something that I really loved. Building a website also helped to start getting us more work.

What does a typical work day look like for you?

Days are always different depending on the project. Generally, I’ll do boring stuff like answering emails and quoting in the morning, pick up materials from the studio, head to the job site and paint until the evening, then do some design work at night.

You’re based in Nashville, which is known for being an artistic city. How has the community supported your creative endeavors?

Nashville is a creative and quickly transforming city. As it has changed, people have really supported the explosion of murals around town, which has been great for us. Bigger brands and companies are starting to see Nashville as place to launch creative advertising campaigns, and are hiring local artists in turn.

Nashville is a good size because it’s not too dense and hectic (yet), but there is always plenty to see and do. The music scene is growing quickly and the city has a lot more to offer than just country music. The food is great too.

Being born and raised on the east side, I love Shelby Park, and tend to frequent the more divey bars and venues.

What has been the reaction to Eastside both locally and on a larger scale? Have you all been commissioned to do work in other cities?

There’s a lot of variety in the different projects we do, so they are not going to be liked by everyone. However, most locals seem to like our work around town. We’ve been commissioned to do projects in nearby cities like Chattanooga, Atlanta and Huntsville. We’re hoping to travel for work more in the future.

What advice would you give to someone who is looking to start in a similar creative field? What do you wish you had known before you got started?

I would advise them to sketch a lot and try to find their own style, and to not worry too much about what other people are painting or what people want to see painted. Another thing that I need to keep reminding myself is that I don’t have to take every job that comes along. Working hard on a few projects, rather than busting through as many projects as possible, will bring you more satisfaction.