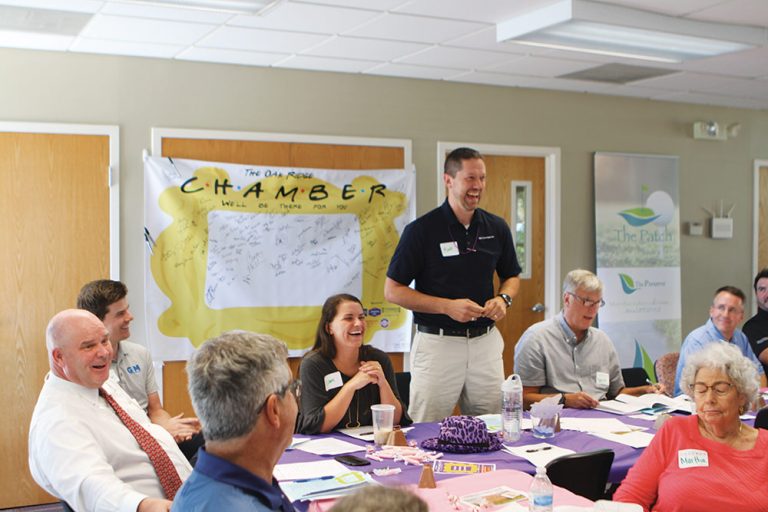 The Oak Ridge Chamber of Commerce “will be there for you.”

That is a fact every day, of course, but it truly carried the momentum in September 2019 when the organization conducted a hugely successful two-day new membership sign-up drive. The chamber used the iconic TV show “Friendsâ€ for the theme of its ambitious campaign, in which it grew its membership by 165 businesses, bringing in bringing in $113,235 to support the chamber’s mission.

“We did membership drives in 2013 and 2016 and needed a theme for 2019, and the “Friendsâ€ show was often in the news in 2019 because they were celebrating their 25th anniversary,â€ says Kathy Gillenwaters, communications coordinator with the Oak Ridge Chamber of Commerce. “As a result, our campaign slogan was ‘Oak Ridge Chamber: We’ll be There For You’ – playing off the show’s famous song lyric – and there were a lot of fun references to the theme as recruitment teams got involved.”

“I even went to a local thrift store to borrow a love seat that looked a lot like the iconic couch that was shown whenever a “Friendsâ€ episode ran its credits,â€ she says. “I also had an old lamp in my house that looks like a lamp from the show, so we used that, too. During the two days, many of the volunteers got their pictures taken with that couch and lamp during the event.”

Gillenwaters says the drive involved many volunteers from the community who formed teams that worked four shifts over two days, with those teams recruiting as many companies as possible for membership.

More than 200 volunteers made this amazing achievement a reality.