Can Riding Your Bike Help Your City?

The 41-mile Longleaf Trace bike and hiking trail is given credit for a boost in downtown development in Hattiesburg, MS. 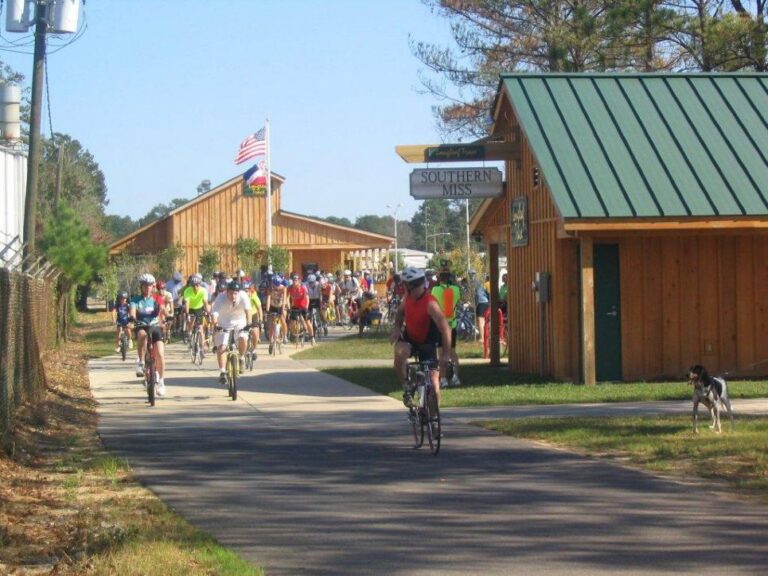 A bike trail is “pedaling” prosperity for a Mississippi community. Hattiesburg is seeing a rebirth of its downtown and metro area and much of the credit is going to Longleaf Trace, a 41-mile trail stretching across three counties and four communities. New apartment complexes and housing developments, retail shops and restaurants have spring up along the path, especially in Hattiesburg. Longleaf Trace, which has more than 100,000 riders annually, is paved, 10 feet wide, and is the longest “rail-trail” in the south central U.S. Currently, the trail runs from Prentiss to the University of Southern Mississippi campus in Hattiesburg and there are plans to extend the trail through downtown Hattiesburg, sparking even more enthusiasm for the city’s development. “We are a certified retirement community and the trail is a big selling point for anyone looking to move here or locate a business,” says Alex Pickle, community development manager for the Area Development Partnership of Greater Hattiesburg.

“The trail was built on the basis of it being something that would enhance our quality of life and spark economic development and it has done both,” says Herlon (cq) Pierce, executive director of Longleaf Trace and trail manager. Pierce said the trail had had a favorable economic impact for Hattiesburg and all of the communities along the trail. Longleaf Trace is credited as the impetus for new residential construction, retail shops and restaurants and is expected to add even more once the trail is extended into downtown Hattiesburg. James Moore, owner of Moore’s Bicycle Shop in Hattiesburg, said his business is booming since he moved to a location next to the trail shortly after it opened in 2000. Since then he has doubled his business and staff and has more than tripled his square footage. Moore has also seen a dramatic demographic shift in customers, from experienced bike enthusiasts now to first-time bike-riding baby boomers. “In my estimation, many of our newer apartment and residential housing complexes were built here in recent years with the trail in mind,” says Moore, who says that even some of the developers who pooh-poohed the idea of the trail 14 years ago are now using it as an amenity in their advertising. The downtown extension will include bike lanes along streets in Hattiesburg’s historic district. “The extension of the trail through the downtown will help ensure the revitalization in Hattiesburg will continue,” says Moore. He also points to the recent purchase of two 100-year-old buildings downtown being developed into loft-style apartments. “Those would not have been developed without the presence of the trail,” says Moore. Future housing development downtown and the rise of new restaurant and music venues give Hattiesburg a bright future. The trail extension is also being planned to extend to the city’s zoo.

Hattiesburg Universities Jump On The Trail

Moore has also helped the University of Southern Mississippi (USM) with a bike rental facility with more than 70 bikes available for students and visitors to rent. Before the trail was established both Hattiesburg-based universities, USM and William Carey University, were not biking campuses. Along the Longleaf Trace are what Pierce calls “loops of interest,” which are side paths that can take bike riders and pedestrians to parks, campsites and other interesting nature locations. Longleaf is called a rail-trail because it runs along a path that was once part of the Mississippi Central Railroad line. A concerted effort by local groups and individuals preserved the corridor, and in 2000 it opened as Longleaf Trace.