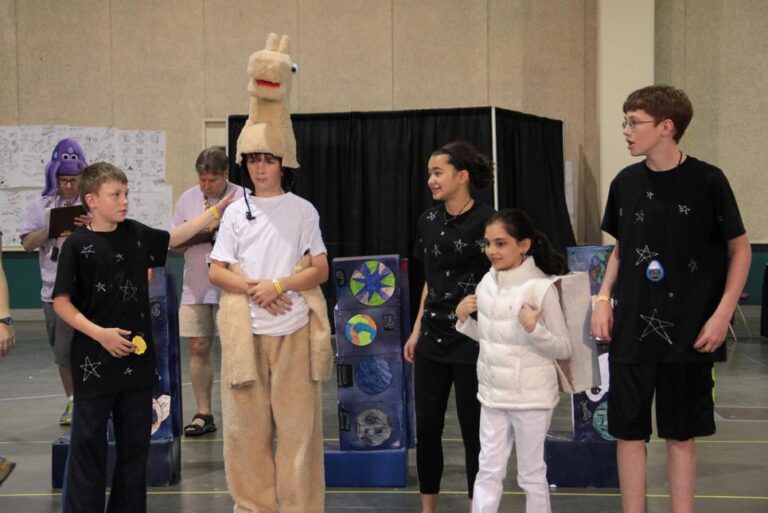 The team known as “Oh, I Get It Now!” – a group made up of six students from Richland High School in Richland, Wash. – faced quite a challenge in the Destination Imagination’s Global Finals held in late May.

In what could be called the Super Bowl of Destination Imagination, a nonprofit that helps students from kindergarten through college discover their creative processes, “OIGIN” was one of more than 1,400 teams from 48 states and 30 countries competing in Global Finals 2014 at University of Tennessee in Knoxville.

All teams are presented with a challenge that adheres to one of six categories, ranging from STEM (science, technology, engineering, math) to fine arts to service learning.

“Through all of those challenges, they learn what we call 21st-century skills,” says Tina Shaffer, spokesperson for Destination Imagination. “These are skills that may not be taught in a lot of classrooms, so they learn teamwork, perseverance, creativity – using their imaginations to develop solutions to whatever challenge they have chosen for the year.”

For the team from Richland High, which took first place for the secondary level in the category “Dig In,” the challenge had to do with objects. The students designed and built not only the objects themselves but also the containers to conceal them.  They had to create a way to detect and extract the objects before moving them across a finish line.

“In addition,” says the team manager, Lori Nelson-Chin, “the challenge tasked them with telling a story that highlights technology used to detect something that normally cannot be detected by the human senses.”

This involved writing a storyline about a teenage boy and girl on a date, feeding information that represented the girl’s thoughts into a computer, then acting out the scenes on a set that was similar to a pop-up book.

The task may sound complicated, but the team was able to impress the judges by working together and letting their individual skills play off each other.

“We had an extremely diverse group of kids in terms of experience, academics and skills,” Nelson-Chin says. “Even though the challenge was focused on engineering, there are still artistic components – story/script, set design, team-choice elements. Because of the diversity of the team, they recognize each other’s unique talents and capitalize on them.”

That is basically the mission of Destination Imagination, which was founded in 1982.

“Oh, I Get It Now!” was among 28 first-place teams across all age groups from 10 states plus Canada, China and Singapore.

“It’s a ton of hard work, really long hours, lots of frustration, and in the end, a huge payoff,” Nelson-Chin says. “The kids sacrifice weekends and put in extra hours during the school week in order to get everything completed on time.  But in the end, tournaments are a celebration that gives the kids the opportunity to share their solution with others.”