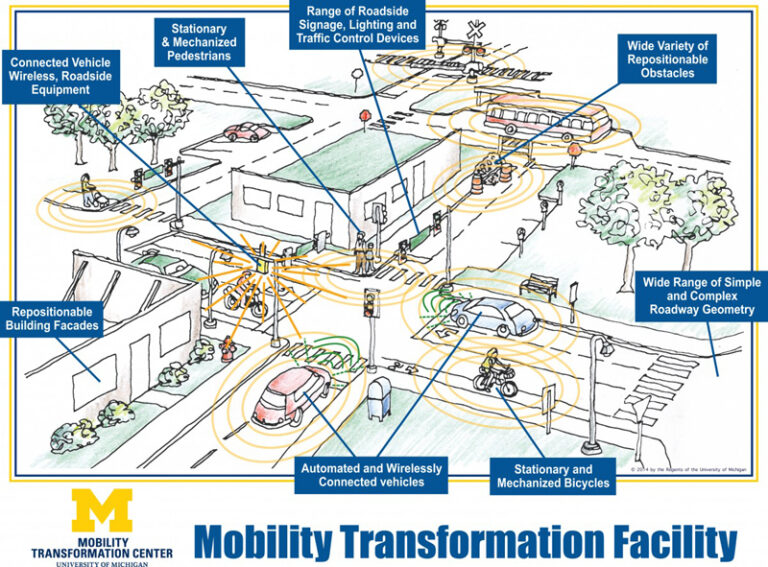 The University of Michigan, which is located in Ann Arbor, has begun construction of what officials are calling a “mini-cityâ€ that will be used to test connected and automated vehicle systems along with other emerging smart-city technologies.

The 32-acre test site, called M City, will include a network of roads with up to five lanes, intersections, roundabouts, roadway markings, traffic signs, signals, sidewalks, bus lanes, benches, mock buildings, streetlights, parked cars, pedestrians and obstacles like construction barriers. Basically, everything you or your car might encounter in a real city, although there was no word on whether M City will include cyclists, squirrels and pigeons.

Designed and built in cooperation with the Michigan Department of Transportation, M City’s roadways are already completed. The facility is expected to be operational by spring, with a grand opening planned for July.

“Connected and automated vehicle technology will usher in a revolution in the mobility of people and goods comparable to that sparked by the introduction of the automobile a century ago,” says Peter Sweatman, director of U-M’s Mobility Transformation Center. “M City will allow us to rigorously test new approaches in a safe, controlled and realistic environment before we implement them on actual streets.”

Safety Is the Main Goal

Creators of connected and automated vehicles believe they will create safer driving conditions by removing the complex sensing, monitoring and control processes involved with driving from humans. Driver error is responsible for about 93 percent of all fatal crashes in the U.S. These new automated vehicle systems, which are being developed by several automakers and Google, could also help reduce congestion, improve air quality and limit energy consumption. Able to connect to networks and instantly find data, driverless cars could forecast potential traffic jams, steer clear of road construction, identify the shortest possible routes and sense when other vehicles are in proximity.

The University of Michigan has partnered with a range of organizations and institutions interested in harnessing the potential of driverless vehicles. They include major car makers and suppliers, technology and telecommunications companies, federal and state agencies, and economic development groups.

As for when these driverless cars could hit the real streets, many experts believe that’s about six years away.

“We are on the threshold of a transformation in mobility that the world hasn’t seen since the introduction of the automobile a century ago.”