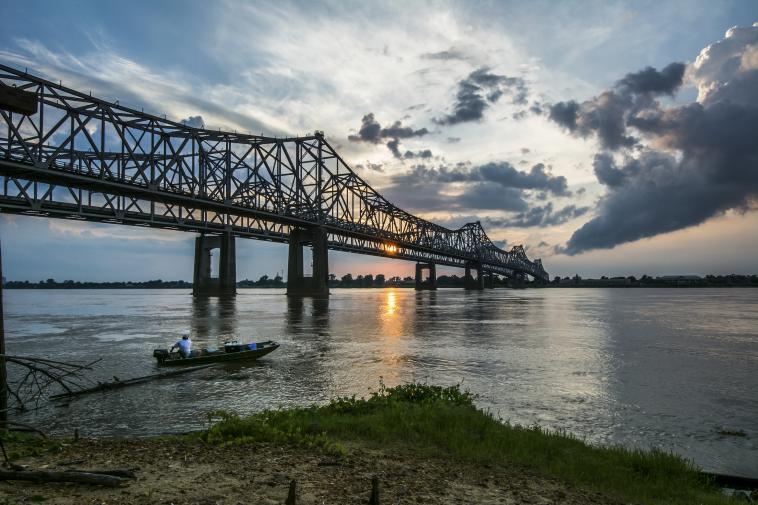 Ol’ Man River. The Big Muddy. The Mississippi River has played key roles in novels by William Faulkner, Herman Melville and Mark Twain, and today the mighty Mississippi is playing a key role in the economy of Natchez-Adams County.

During its history, the first 200 years of Natchez saw the city thrive as a center of commerce thanks to its strategic location on a bluff overlooking the river. Many settlements formed, and the middle of the 19th century featured wealthy Southern plantation owners growing cotton and sugar cane, using their export profits to build antebellum mansions in Natchez.

“The river has historically been the lifeblood of Natchez,” says Chandler Russ, executive director of Natchez Inc., the economic development agency for Natchez-Adams County. “For agriculture and various industries, a constant in Natchez history is the importance of the river.”

During the 1900s, the economy of Natchez suffered because steamboat traffic on the Mississippi River was gradually replaced by the railroads. Many river towns, including Natchez, were bypassed by railroad traffic.

“In the later 20th century, tourism helped compensate somewhat for the economic decline, since many of the antebellum mansions survived and still play a key role in bringing tourists to the region,” Russ says.

Today, Natchez is seeing a resurgence in its economy that includes renewed business investment in the river, as evidenced by the Natchez-Adams County Port. Cargo from Natchez is shipped to South America, Europe, the Middle East, Asia and Middle America via the Mississippi River, with commodities such as lumber, plywood, steel, cotton, liquid petroleum products, grain and machinery components.

“The port is the busiest it’s been in 20 years,” Russ says. “Natchez has maintained its traditional grain and aggregate business while largely increasing the movement of liquid goods like petroleum and petroleum products. And things will only get better for the port with the continued development of the nearby Tuscaloosa Marine Shale (oil drilling) project.”

Russ adds that over the last three years, the Natchez economy has been bolstered by more than $1 billion in new construction initiatives. That includes expansions or new projects at companies such Genesis Energy, Elevance Renewable Sciences, Enersteel and Von Drehle.

Besides business and industry, Natchez has continued to attract new residents over the past several years. For example, many ex-New Orleans area citizens relocated to Natchez after Hurricane Katrina, including Marbeth Schon* who opened M. Schon Gallery.

“My husband, Andrew, visited Natchez in the past and thought it was beautiful,” Schon says. “We like downtown areas and found a great building for our business in downtown Natchez.”

“I sell mostly jewelry along with pottery, paintings, photography and glass in my gallery, with downtown Natchez getting more vibrant all the time,” she says. “We enjoy living and working in Natchez. Everyone we meet is friendly. We certainly chose the right city to relocate.”