Skip to content
Home > Education, Careers & Opportunity > The Best Economic Cities and How They Got There

The Best Economic Cities and How They Got There

These cities have thriving local economies, low unemployment and good job growth – and that’s not by accident 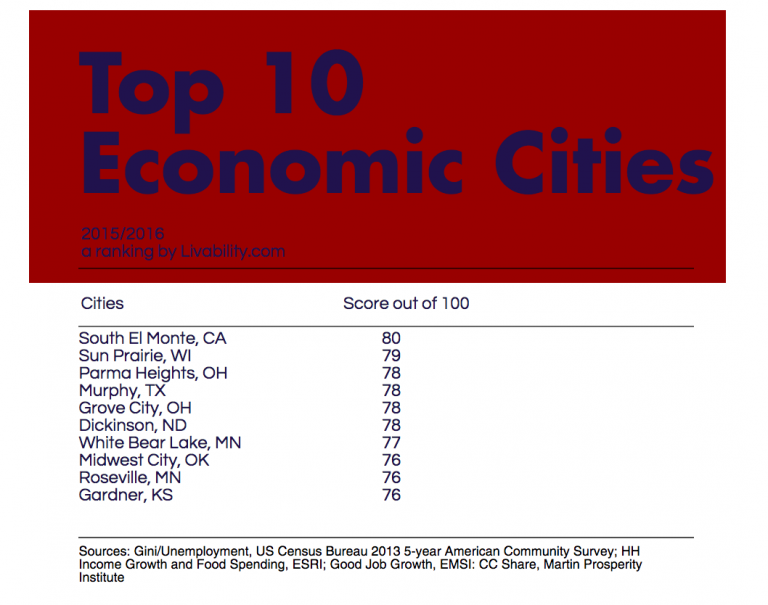 What helps certain cities develop the best economies and become the most livable places in America?

If you ask residents, most probably will answer the quality of life. And that has a lot to do with the local economy. A city with more vacant storefronts than thriving businesses probably isn’t a great place to live. Neither is one with a crumbling infrastructure, increased crime or an ineffective government.

Listen to any politician’s stump speech and you’ll likely hear that small businesses drive economic growth. With nearly 28 million small businesses across the country, that’s true nationally and it’s true for many of the cities on our top 10 list.

According to the U.S. Small Business Administration, small businesses provide 55 percent of all jobs. With this backdrop, it’s no surprise that the cities with the best economies emphasize attracting and retaining new business.

For example, in Murphy, Texas, – which ranks second in our index for good job growth – officials launched a “Buy Murphy” program to lift the visibility of businesses within the city’s six square miles. Murphy even lauched buymurphy.org, an online business directory with 150 listings. The “Buy Murphy” program is an umbrella initiative for other incentive programs that encourage local shopping, like a Receipt Turn In program that gives people a $25 gift card for every $500 worth of receipts individuals bring in from Murphy businesses. Murphy also has a City Hall Incubator that allows small and new businesses to rent office space in City Hall for a low fee and access its meeting and training rooms. Apparently, these efforts work. During the 2013-14 fiscal year, 10 percent of the city’s revenues came from sales tax and that figure is expected to increase to 14 percent this year. In fact, Murphy already has collected more than $1.45 million in sales tax this year. Not bad for a city with a population of 25,000.

“The Southeast area of Collin County is a rapidly growing area,” says Debra Mandala, executive director of the Murphy Chamber of Commerce. “Pure geography is bringing people here. [With] more people, the more opportunity for businesses to grow here.”

Other cities on the list have launched similar programs. Parma Heights, Ohio, for example, has an Economic Loan Development Program that gives eligible businesses long-term fixed-rate financing for relocating, expanding or building new facilities in the city. Grove City, Ohio, has a Town Center Loan Program that awards $5,000-$150,000 loans at a 3 percent interest rate to eligible businesses within the city’s limits. As of 2014, the 16.3 square mile city is home to more than 1,200 businesses and more than 25,000 new jobs.

Investing in redevelopment is also critical to economic growth and livability. In South El Monte, Calif., which ranked first in our overall index, new developments have helped meet the city’s demands for additional housing, according to City Manager Anthony Ybarra. There’s also been new commercial development.

“We have a new shopping center, new senior housing and affordable and market-rate housing,” Ybarra says. “We think we’re pretty dynamic, even though we’re surrounded by bigger cities.”

Redevelopment hasn’t come easy for the city, which is located just 20 minutes from Los Angeles. Ybarra said after the state eliminated its redevelopment programs in 2011, many communities like South El Monte suffered. The city also took a hit because it no longer had access to program funding generated through increased property values, which allowed cities with redevelopment programs to reinvest the revenue back into their communities to service debt, issue bonds or invest in housing. Without government resources from the state, South El Monte has turned to grant writing to bolster its redevelopment efforts. It’s been successful in getting state and county funds to purchase and rehabilitate homes in the city. Ybarra said other cities should be just as resourceful.

“Don’t labor in the woe-is-me attitude that says there’s no money so we can’t do anything,” Ybarra says. “Be aggressive and try to find additional resources.”

Resourcefulness has worked for other communities, too.

“We grab our own bootstraps around here,” says Gaylon Baker, executive vice president of Stark Development Corp., an economic development agency focused on Stark County and Dickinson, N.D., one of the cities on our list with the best economy.

Dickinson had to do some rebuilding after a 2007 tornado. As a result, the town has invested in numerous infrastructure projects, Baker says, including new community and recreation centers – all of which were funded by a sales tax increase for which residents voted. Three years ago, millions of dollars in private and community donations also helped build a new hospital.

“We’ve just invested in public amenities that are important to people,” Baker says.

One positive economic indicator is good job growth. All the cities on our list experienced job growth from 2010-2014 and a growth of earnings over the same period. Dickinson tops this category and has the lowest employment rate among all the top 10 cities, at 2.5 percent – well below the current national average of 5.1 percent. Murphy, Texas; Sun Prairie, Wis.; and Roseville, Minn., also fare well, with unemployment rates between 4.3 and 4.4 percent.

All four cities have benefited from major employers. Roseville is home to the Minnesota Department of Transportation, Symantec Corp. and Old Dutch Foods. The oil, manufacturing and health-care industries have driven job growth in Dickinson, while Murphy has benefitted from the relocation of big companies like Toyota and State Farm to southeast Collin County, Mandala says. Sun Prairie benefits from an agriculturally-driven economy and Thermal Spray Technologies, a major employer that last year announced an $11.5 million expansion that will create 200 jobs. In fact, Sun Prairie is doing so well in job creation that it has the lowest jobless rate in Wisconsin.

Rob DeRocker, an economic development expert who has worked with many municipalities and major employers across the country, said cities can do several things to make themselves more attractive to big companies. First and foremost is the availability and quality of the workforce, followed by tax breaks and a solid infrastructure. But DeRocker says cities that want to have the best economy must balance courting major employers and retaining local business.

“Statistically, it’s been said that 80 percent of new jobs are created by existing businesses,” he says. “It’s so vital for the community to dance with the girl that brung you. It speaks to retention efforts and making sure that you’re paying a lot of attention to existing companies and that you’re not skirt-chasing at their expense.”

Gaylon Baker of Dickinson, N.D., said his best economic advice for other small and mid-sized cities is to cultivate a young, energetic workforce because they will prevent the local economy from remaining stagnant and make the community more vibrant.

“People don’t move to a job,” Baker says. “They move to a place they want to live.”