Google Fiber is having a big impact on cities’ economies, digital literacy and lifestyle 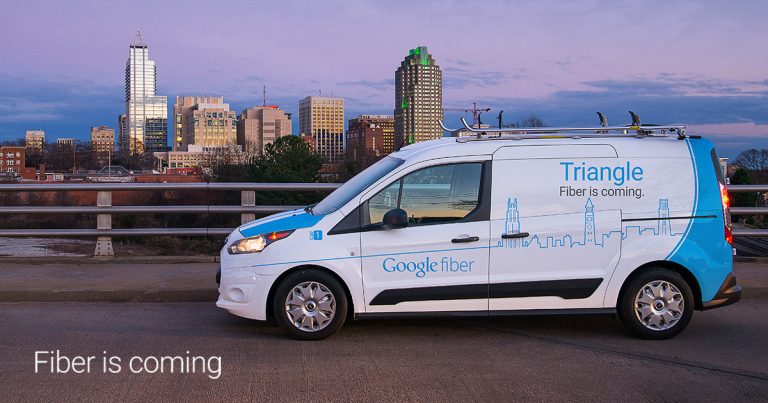 On April Fools’ Day 2015, tech mega-giant Google spoofed its own broadband Internet advances with a YouTube film for a revolutionary new dial-up mode, boasting that its agonizingly slow speed would allow users more time for family, chores and snacks.

Thing is, Google can afford to poke fun at itself. Because as the company rolls out its Google Fiber service in a growing list of cities, public response has been enthusiastic, with phrases like “life-changing,” “incredible” and “a game-changer for our city” popping up in the conversation.

What’s the buzz about? Google Fiber provides broadband Internet access at speeds of 1 gigabit, or 1,000 megabits, per second – which can be up to 100 times faster than most Internet connections. Downloading a hi-def movie that might take nearly 11 minutes via an average Internet connection, for example, takes seven seconds with Google Fiber. Downloading 100 songs: three seconds.  And with upload speeds similarly fast, businesses, especially those that upload huge files and massive data, have a major advantage over their competition.

“The slowest Internet you’ll tolerate is the fastest Internet you have experienced. Once you’ve had it you can never go back,” says Rick Usher, assistant city manager in Kansas City, Mo., where Google Fiber first launched in 2012. “Now people leave town and visit relatives and come back groaning about how slow the Internet was. It’s been a pretty amazing experience.”

Currently, Google Fiber is available in Kansas City; Provo, Utah; and Austin, Texas. Next, it will be available in Nashville, Tenn.; Charlotte, N.C.; Raleigh-Durham, N.C.; Salt Lake City, Utah; Atlanta, Ga.; and then other cities around the U.S.

Rolling With the Rollout

Kansas City’s experience with the rollout of Google Fiber – at an estimated cost of $300 million – was largely a positive experience, Usher says, albeit a process that was frequently disruptive. A sprawling metro area, Kansas City covers some 315 square miles of urban, suburban and rural land with a metro population of about 2 million.

In launching Fiber, Google built out “fiberhoods” as residents signed up for the service.

“It was a huge construction project, passing virtually every residence in the city,” says Usher, who was intimately involved in the planning and rollout of Google Fiber. “It was a moving construction project, constantly moving and in and out of many different parts of the city. So there would be two- or three-week disruptions in front of a house as Google worked on a block.”

Still, he says, there were comparatively few complaints about noise, construction mess and traffic jams, given the scope of the project, and both the city and Google were proactive in handling complaints and soothing residents’ worries.

Besides the sheer convenience of Google Fiber, Kansas City has experienced a tech boom tied to the service, and is emerging as a regional and national tech hub. Entrepreneurs in the first fiberhood, inspired by the availability of Google Fiber, collaborated to build Startup Village, a square mile of residences and commercial buildings which now numbers 35 member businesses and 15 properties.

“Google Fiber’s been a rallying point, a lightning rod for attention,” says Matthew Marcus, who has launched two startups in the Village.

In 2012 a Sprint Accelerator was launched, bringing 20 businesses to Kansas City for its programs. The city is now also a TechWeek city because of its burgeoning entrepreneur community.

Provo, Utah, which has had Google Fiber since 2013, has enjoyed a good fit with the service, given the 70,000 college students in town, and the city’s niche as a place that nurtures startups, says Dixon Holmes, Provo deputy mayor.

“It has bought us recognition,” he says. “Our tech businesses love it and it does provide services we have not had in the past. It’s making a difference. And Google has been a good community partner, which is important.”

Partnering with the community has been a big part of Google’s presence. The company sponsors community events and charitable initiatives in its cities. And its Community Connections program donates free Internet service to community organizations.

In Austin, Texas, where Google Fiber will launch in summer 2015, a partnership between the company and the city will bring the service to Austin’s 4,300 public housing residents. Families that sign up will receive 10 years of free basic Internet service and may upgrade to gigabit speed any time. Google will provide computers to education and training centers in public housing, and will fund the nonprofit Austin Free-Net, which will offer training in digital literacy.

“There’s been a lot of publicity about Google Fiber coming to Austin and the impact it will have on the community, including economic development and education,” says Rondella Hawkins, Austin telecommunications and regulatory affairs officer. “Hopefully we can be a test site for developing applications that will help other cities, and demonstrate the need for high-speed gigabit broadband.”