Grab some popcorn and a blanket: It's showtime. 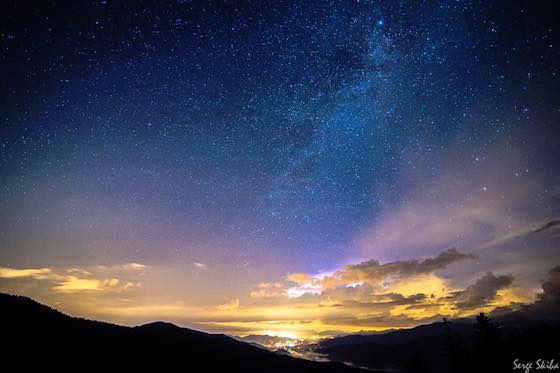 Everybody knows you need a dark sky to see a meteor shower. But what are the optimal conditions for watching meteors streak down from space?

Dr. David Weintraub, a professor of astronomy at Vanderbilt University, claims that when it comes to meteor shower watching, the flatter the area around you is, the better. That’s because pesky hills and mountains can block portions of the sky that could make up some prime viewing. He also suggests you allow your eyes a good 15 minutes to adjust to your (hopefully) very dark surroundings. Speaking of dark, you want it to be can’t-see-your-hand-in-front-of-your-face-dark, so get at least 30 minutes away from any major city. If the meteor shower you’re watching so happens to line up with a new moon, you’re in business, baby!

Ready for a change? Check out our list of the 100 Best Places to Live

Coudersport, PA is a tiny town of less than 3,000 people, but it’s home to arguably the best place in America to meteor watch. Cherry Springs State Park has remarkably dark skies, and it’s well-known for being one of the best stargazing spots on the eastern seaboard. In 2008, it received the esteemed award of being a Gold Level International Dark Sky Park—an award only given to the places with the lowest light pollution. Cherry Springs even offers an Astronomy Observation Field where serious stargazers can camp overnight.

Albuquerque is New Mexico’s largest city, but drive just 151 miles west and you’ll reach Chaco Culture National Historic Park. Turn your eyes to the sky in this National Park-designated International Dark Sky Park while you walk among ancient Chacoan ruins. Like Cherry Springs, Chaco is rated at Gold-tier level for dark parks, and more than 99% of this park is a “natural darkness zone.”

Now this one I can totally vouch for. You may be thinking the super-long flight to Alaska isn’t worth it for stargazing, but you’d be dead wrong. This tiny town is located at the base of Denali, and is the hub for climbers who stay at Talkeetna Roadhouse, the local bed and breakfast. Enjoy a huge plate of reindeer sausage before you gear up for stargazing, and be sure to visit in the winter for extra-long nights and opportunities to stargaze. If you’re lucky, you may even see the Northern Lights!

Fifty-six miles southwest of Tucson, Kitt Peak (KP) hosts the world’s largest assortment of optical and radio telescopes. For ultimate star viewing, KP offers three tiers of programs geared toward various skill levels. Beginners can take a binocular tour of the clear night sky, while more advanced sky watchers get exclusive use of the center’s research-grade telescopes for the evening.

Courtesy of John Buie under a CC 4.0 license.

You may know Vegas for its neon lights and rowdy bachelor parties, but nestled just two hours away is one of the world’s best places for stargazing. Death Valley National Park is America’s biggest International Dark Sky Park, and because it’s so flat, the sky literally starts at your feet. Its natural darkness and night sky programs make it a popular place to watch a meteor shower.

While this one’s not super far off the beaten path, it’s worth noting because of its unusually large and accessible public telescope. Goldendale Observatory State Park is a five-acre facility dedicated to education and telescope viewing. It’s a certified Dark Sky Park, and guests come from all over to watch the skies and (maybe!) catch a glimpse of the aurora borealis.

Blanding is definitely not bland. It’s the most populated city in San Juan County, and a great gateway for many natural parks, including the Natural Bridges National Monument. Located just 45 minutes away, this park is one of America’s darkest. It became the first ever International Dark Sky Park in 2007, and boasts one of the most beautiful naturally-made bridges in the world. If you visit, plan on feasting your eyes on more than 15,000 stars—a rare treat compared to the mere 500 you’ll see from a city.

The Stars at Mauna Kea/Courtesy of Matt Rafferty under a CC 4.0 license.

Like Alaska, don’t let the long flight get you down! At around 43,000 residents, Hilo is the largest city in Hawaii County, home of the dormant Mauna Kea volcano. Drive just 43 miles from Hilo and you’ll reach Mauna Kea, which, because of its high altitude and stable airflow, is one of the world’s best spots for observing stars. It’s also home to 13 of the world’s most powerful telescopes, so why not plan a trip to the Aloha State?

Courtesy of Vincent Lock under a CC 4.0 license.

Alpine is the closest city to Big Bend National Park, the park with the least amount of light pollution in the lower 48 states. The small town of fewer than 6,000 people is nothing to scoff at—in fact, Alpine is so close to Big Bend that it’s oftentimes called “The Heart of Big Bend.” On a clear night in this Dark Sky Park, more than 2,000 stars are visible to the naked eye.

The Milky Way over the Blue Ridge Parkway. Courtesy of Serge Skiba

Located just 6 miles west of Spruce Pine, Blue Ridge Observatory and Star Park is the first (and only) International Dark Sky Park in the southeastern U.S. This silver-tiered dark sky park is also the first to have all of its outdoor lighting fixtures emit low-color-temperature LED lights. If you’re planning a trip to the Appalachian Mountains soon, you won’t want to miss this unique park.