These 10 state fairs take the (funnel) cake for most fun. 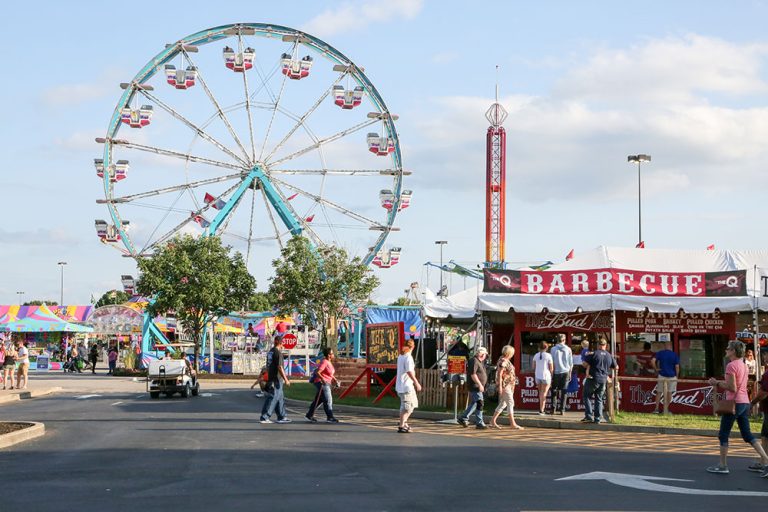 Summer just wouldn’t be complete without a visit to the state fair. There’s something about the combination of carnival rides, cotton candy, livestock competitions and pie eating contests that brings out the kid in us all. Plus, the state fair might be the only place where it’s acceptable to order your ice cream deep-fried. But while you can enjoy fun summertime traditions at every state fair in the country, a few of them stand out from the rest.

So from funnel cakes to Ferris wheels, we’re counting down the top 10 state fairs in America.

The Iowa State Fair in Des Moines stands out as one of the oldest and largest agricultural and industrial expositions in the country. The fair offers an impressive lineup of entertainment acts, livestock and art competitions, and unique attractions. To top it all off, the Iowa State Fair is famous for its Food on a Stick. Choose from fair favorites like apple pie-on-a-stick, fried pineapple-on-a-stick, Caprese salad-on-a-stick, fried Snickers-on-a-stick and over 75 more. Need one more reason to visit? You’ll also find a famous life-size cow sculpture made of 600 pounds of low moisture, pure cream Iowa butter.

Where: Fair Park in Dallas, TX

They say that everything is bigger in Texas – and the State Fair of Texas is no exception. Held for 24 consecutive days, it’s the longest-running fair in the country. It also takes the title for the highest number of visitors at just over 2 million. The fair features hundreds of creative arts exhibits, a canine stunt show, and exhibitions in agricultural innovations at the Big Tex Urban Farms indoor growing facility.

Want a taste of some of the most interesting foods the State Fair of Texas has to offer? Try the bacon brittle, deep-fried pico de gallo or cotton candy tacos. Then wash it all down with a corn dog amber ale or a pickle juice Kool-Aid sangria. Seriously, Texas foodies aren’t messing around.

The history of the Minnesota State Fair goes back to 1854. It began as a regional fair to highlight agriculture and farming in the area and later became an official state fair in 1859. Today, the Minnesota State Fair attracts more than 2 million guests to the 322-acre fairgrounds. Your senses will be delighted at the fair with all of the sounds, colors and delicious, local treats served up to attendees. The fair features about 300 food vendors, more than 200 animal births at the CHS Miracle of Birth Center and plenty of rides, live entertainment, competitions and educational booths.

First held in 1841, The Great New York State Fair in Syracuse is the oldest state fair in the nation. It draws over a million visitors each year to its rides, competitions and Taste NY food vendors who highlight the best of the state’s homegrown products, including buffalo chicken, of course. The fair also features a unique drone film festival, cooking contests, a flower show and several horse events.

Visitors to the Wisconsin State Fair will have the unique opportunity to ride the WonderFair Wheel, North America’s largest traveling Ferris Wheel. But that’s not the only thing that makes this fair stand out. Love fair foods? The Wisconsin State Fair will satisfy all your deep-fried dreams. The fair hosts over 200 food vendors selling everything from traditional corn on the cob, funnel cakes and cotton candy to more adventurous options like deep-fried cheese curds, chocolate-covered cheddar on a stick and “Blazin’ JalapeÃ±o Deep-Fried Olives.â€ And don’t forget to try one of the fair’s famous cream puffs. Afterward, head to the House of Moo to learn more about the Wisconsin dairy industry and why the state is the perfect place for cheese lovers.

A celebration of Southwest culture, the Arizona State Fair in Phoenix hosts over a million visitors each year. The tradition dates back to the 1880s before Arizona was even a state. Today, the fair offers concerts featuring internationally-acclaimed musicians, exciting rides, livestock shows, and arts and crafts exhibits. It’s also home to the largest food festival in Arizona with over 100 vendors selling creative fair favorites like deep-fried mac and cheese, truffle gouda bacon fries, and Snickers coffee.

About one hour north of Anchorage in Palmer, AK, the Alaska State Fair showcases the state’s unique character. While you can find all the typical fair foods and carnival rides there, the fair also offers a glimpse of Alaskan agriculture and community. The fair features several farm and craft exhibits, contests, and food vendors selling Alaskan-grown products.

The Alaska State Fair has also hosted a number of world-record-winning farmers throughout its history. Due to the nearly endless summer sun in the state, crops seem to never stop growing. In August of 2012, for example, an Alaskan farmer at the fair won the Guinness World Record for heaviest cabbage at just over 138 pounds!

The Ohio State Fair has been welcoming visitors through its gates since 1850. Besides the 60 rides, 200 food vendors, live entertainment, contests and activities, the fair also offers a petting zoo, helicopter rides, a farm animal delivery room, an 8-acre natural resources park, horse shows and more. The fair’s main attraction? A butter cow sculpture.

The California State Fair in Sacramento has been celebrating the state’s agriculture industry for more than 160 years. The fair showcases California’s best products through competitions in everything from extra-virgin olive oil and wine to cheese, craft beer and more. It’s also the largest food festival in Northern California with over 100 food vendors selling everything from gourmet baked potatoes to grilled corn on the cob and other California staples.

The Kentucky State Fair offers something for every type of visitor to enjoy. In addition to thrilling rides, agricultural exhibits and live entertainment, the fair features a variety of unique attractions; guests can visit the Gourmet Garden to see live cooking demonstrations by chefs and bakers from across the state, attend a canine talent show, or travel through all the counties in Kentucky without leaving the fair at the Pride of the Counties exhibit.