Love watermelon? Check out a list of 10 surprising facts about the summer staple. 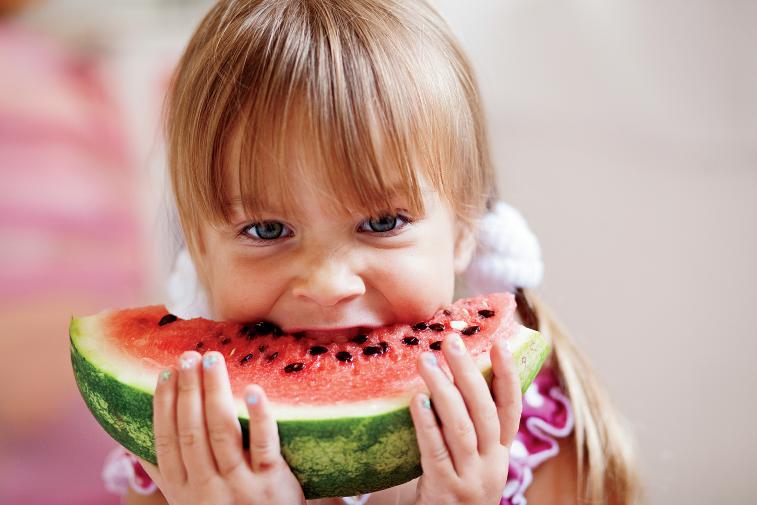 It’s red (yellow and orange), it’s green, it’s sweet, and it’s packed with vitamins A, B and C. It frequently masquerades as dessert (successfully!), and with roughly 92 percent water content, it’s the perfect way to rehydrate on a hot day. Yep, if summer had a flavor, it just might be watermelon. Grown in 44 states, the U.S. ranks fifth worldwide in watermelon production; the sunny states of Florida, Texas, California, Georgia and Arizona produce the bulk of the nation’s total harvest. So, isn’t it only right that this fruit (it’s a vegetable, too) have a day of its own?

Check out this surprising watermelon trivia to help you celebrate summer’s sweetest day:

Melon to feed an army – no, really. The world’s heaviest watermelon recorded to date was grown by Lloyd Bright of Arkadelphia, Ark., and tipped the scales at 268.6 pounds during the Arkansas Big Watermelon Contest in 2005.

Fruigetable? While watermelon is often granted some serious wiggle room in the fruit/vegetable classification department, the great state of Oklahoma has a definitive opinion on the matter. In 2007, the state Senate passed a bill declaring watermelon a vegetable – and the official state vegetable, at that.

We’ll take first place, thank you very much. Cordele, Ga. is the self-proclaimed Watermelon Capital of the World – a designation the small town takes seriously each year at its Watermelon Days Festival. The event boasts such events as a watermelon seed-spitting contest, a watermelon dance and the watermelon gospel-sing.

The incredible, inedible watermelon: Want to see the world’s biggest watermelon? Then set your sights on Green River, Utah, where you can snap a selfie with a melon that’s been around since the 1950s – that is, a 25-foot-long wooden watermelon slice that serves as the centerpiece of the town’s Melon Days each September.

Plan that watermelon-themed roadtrip. Watermelon.org offers up a handy at-a-glance table, listing the dates and locations of more than 50 watermelon festivals, happening from Westminster, Calif. to Kitty Hawk, N.C., and everywhere in between.

Watermelon for life … and beyond: Egyptian hieroglyphics indicate that the first-ever watermelon harvest took place roughly 5,000 years ago. The sweet fruit (vegetable) often was sealed into the tombs of kings because, really, who couldn’t use a snack in the afterlife?

Slow down, is that a….? An estimated 40,000 visitors check out the soaring 154-foot watermelon-shaped water tower each year in Lulling, Texas, home of the annual Watermelon Thump event, named for the sworn-by method of “rind-thumping” for checking a melon’s ripeness.

If you can’t say something nice … Contrary to vicious rumors, seedless watermelons are not the result of genetic engineering; they’re a perfectly safe and clean hybrid. The National Watermelon Promotion Board notes that 84 percent of all watermelons sold in grocery stores are seedless.

Bottoms up, for your health! If you toss the watermelon rind when the sweet part is gone, you’re missing out on the melon’s whole nutritional package. Try throwing the rind into a blender, along with the sweet red meat, and use it the mixture as the base for a summery rum cocktail.