Summer music festivals can be found all over the U.S. — don't miss these big shows in smaller cities. 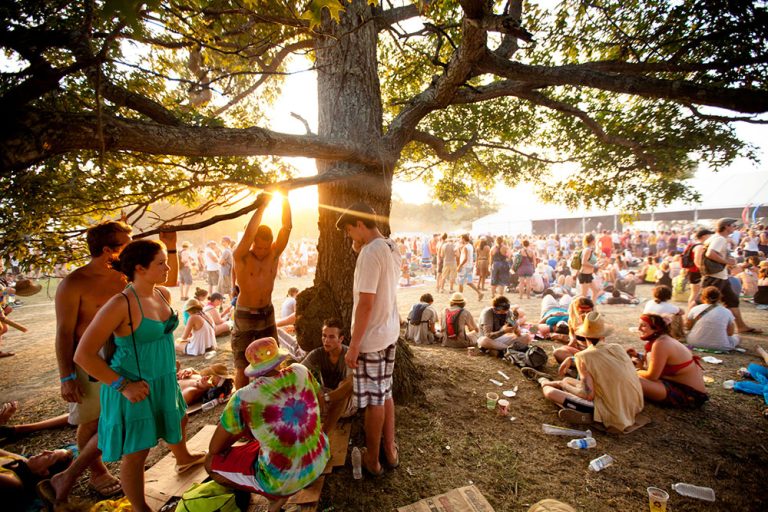 The days are longer, the air is hotter and the music is louder.

For decades music festivals across the country have delighted and entertained. Sure, you’ve got your massive festivals like Lollapalooza, Coachella and Bumbershoot, but there are dozens of other summer festivals worth checking out – and chances are there’s one in your neck of the woods. This summer, you won’t want to miss out on these fun festivals.

Country comes to the mountains at the Taste of Country Festival, held each year in Hunter, NY. Started in 2013, this is the only multi-day camping country music festival in the Northeast U.S. and boy do they know how to put on a show. Over the festival’s three days, guests can enjoy a brew at the Shiner Bock Tap House, hop on the SkyRide for a bird’s-eye view of the action or visit one of the more than 20 food and beverage vendors onsite.

With 10 stages, 150 performances and more than 80,000 people spread out on 700 acres for music, fun and culture there is literally something for everyone at the Bonnaroo Music and Arts Festival held in Manchester, TN. Be sure to check out group yoga sessions, delicious vendors (including Hamageddon & Bacon Land) and Kidsville, a designated area for children geared towards education and sustainability.

For nearly 50 years the Telluride Bluegrass Festival has taken place during the Summer Solstice in picturesque Telluride, CO. Take the gondola and enjoy views of the San Juan Mountains, participate in countless workshops or listen to acts participating in the festival’s signature band contest.

Headliners: Panic! At the Disco, Travis Scott and Post Malone

Taking place at the Dover International Speedway in Dover, DE, the annual Firefly Festival features more than 100 performers over three days across the 105-acre property. In addition to the various musical acts, attendees can also enjoy vintage arcade games, a silent disco and enjoy “glamping” at the Great Atlantic Campout.

More than 100 musical acts come together in Rothbury, MI for the annual Electric Forest music festival, which celebrates electronic and jam band genres. Guests can listen to their favorite artists, camp onsite and even get married! In addition to the headlining artists, attendees can also enjoy The String Cheese Incident, who have played the festival every year since its inception in 2008.

Headliners: The Killers, The Avett Brothers and Maggie Rogers

Held along 85 scenic acres at Louisville’s Waterfront Park, Forecastle Festival began as a small gathering of local musicians but has quickly grown to be one of the most anticipated festivals in the southeast, with a focus on music, art and activism. Ride the ferris wheel, socialize with mermaids at Party Cove and, because it’s Kentucky, enjoy lots of delicious bourbon.

Party like a rock star with some of the biggest metal bands in Oshkosh, WI. Rock USA is three days jam-packed with great beer, diverse food and a marketplace of vendors selling memorabilia and other accessories. Additionally, the grounds include The Hangout, an area with giant pong, cornhole and volleyball.

Bob Dylan made the Newport Folk Festival famous in the ’60s when he showed up with an electric guitar rather than his usual acoustic. These days, the Newport, RI festival is still bringing in some big acts and is one of the most picturesque festivals in the country, taking place on Narragansett Bay at the historic Fort Adams State Park. When festival-goers aren’t listening to their favorite artists, there is still plenty to do, like taking a water taxi to the festival area, a family-friendly atmosphere and plenty of libations.

Each August at the foothills of Whitehorse Mountain in the Cascades thousands of fans gather to enjoy the Summer Meltdown. Featuring more than 50 bands across four stages, the Darrington, WA-based festival highlights nearly every music genre. Equipped with a beer garden, endless adventures (including helicopter rides!) and more, the festival prides itself on being family-friendly with its extensive Kids Zone.

For more than 30 years the Bayfront Blues Festival is one of the largest outdoor events in the upper Midwest. Held in Duluth, MN, 30 acts perform across two stages on the waterfront and welcome thousands of people to the Bayfront Festival Park. For many the highlight of the festival is the late night dance parties held under the Big Top Tent. This festival is BYOLC – Bring Your Own Lawn Chair.