A look at microbreweries and craft breweries across the U.S. set in smaller cities and towns. 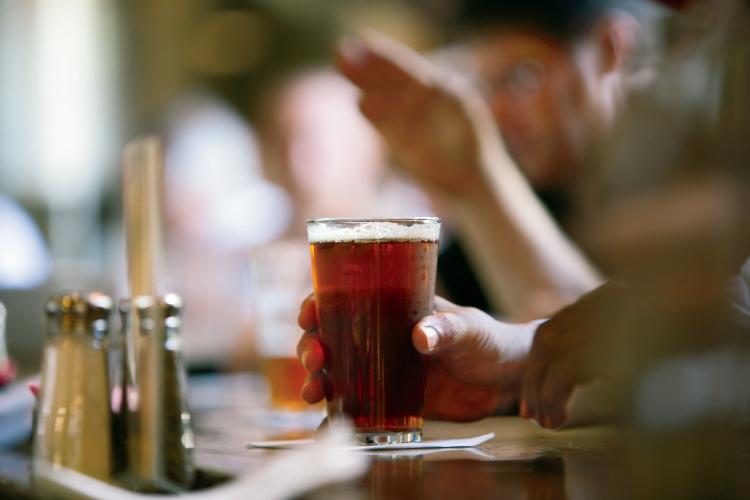 Not long ago, you could rely on the beer in every bar coming from a huge producer: Miller, Budweiser, Busch. Occasionally, there’d be something from a still large but more localized brewery. Then the craft beer revolution happened, and even in the smallest towns, brewers started opening tasting rooms and selling beer. Check out of list of the best beer cities for a look at places where microbrewing has taken off.

The Washington Post says 948 permits were granted for new U.S. craft breweries last year; more than 40 percent in California, Colorado, Washington and Oregon. Even in the more conservative South, states like Alabama came close to doubling their numbers. In metropolitan areas and small towns alike, good beer doesn’t stop outside the big city limits. These new brewpubs can be a great draw for main street and a boost to local tax coffers, too.

Alabama saw a sea change in 2011 with the repeal of Prohibition era laws, and breweries flourished. Now, in smaller cities and towns, places like Fairhope Brewing Company (Fairhope) and Straight to Ale (Huntsville) are packed with customers, according to Huntsville resident and home brewer Dr. Walton Gibson.

The more that’s available, the more our collective palate grows, according to Dave Sergio, brewer at Calfkiller Brewing Company in tiny Sparta, Tenn. “There’s less of a ‘rat race’ in smaller communities,” he says. “There are so many craft breweries in Nashville. Here, people really had no exposure before we started; the popular things were maybe Sierra Nevada or Sam Adams in grocery stores. Now, they not only buy ours, but they go out and try other craft beers.” He adds that growing up in Sparta, plus the advantage of a good water source, the Calfkiller River, also gave reason to keep the operation in his hometown.

“The best reason for local beer is usually that it’s the freshest product,” says Karen Lassiter, head brewer at the Nashville home of Bosco’s. “And I think local breweries adapt to local tastes, giving people what they want to drink.”

While you can find a plethora of beers from big cities, from Seattle and San Francisco to New York and Washington, D.C., here are 12 examples of great beers from smaller town craft breweries. Some are available regionally and nationally, so check your beer seller.

Grassroots Ale – Calfkiller Brewing Company, Sparta, Tennessee. Of the pale ale type, Calfkiller is unusual in that they use one strain of yeast for continuity through all their beers, so you get citrus, floral and hoppy notes, but no bitter finish as with more traditional pale ales. The Grassroots Ale is a flagship beer for them, produced year round, and it's ideal for light hops lovers. Calfkiller has distributed across Middle Tennessee since its inception in 2010.

Irish Style Lager – Rogue Ales & Spirits, Rogue River, Oregon. Perfect for St. Paddy’s Day, this beer took the gold at the 2012 World Beer Competition and bronze at the 2012 Australian International Beer Awards. If you want a mellow, smooth, apple noted flavor, this is your beer. The brewmaster wanted a lager that would float Guinness when he first brewed it up in 1998 – he succeeded admirably. Rogue River has several award winners, but look out for this one. The brewery grows their own hops, barley, rye and honey near Mt. Hood.

Copperhead Pale Ale – Free State Brewing Company, Lawrence, Kansas. Inspired, so the story goes, by an actual snake bite, this pale ale is a flagship brew for Free State, a Lawrence institution since 1989. Hop-forward and a bit citrusy, the author has enjoyed it with gusto. If you need a seasonal choice, the Brinkley's Maibock is worth trying, with honey and toffee notes and smooth malt. Ask about the moniker when you go in – old Doc Brinkley, who it's named for, was a snake oil salesman whose version of Viagra involved goat bits.

Jefferson Stout – Lazy Magnolia, Kiln, Mississippi. More came out of Kiln than just Brett Farve. Most people know Lazy Magnolia for Southern Pecan, aged in bourbon casks (bronze medalist in the 2006 World Beer Cup). That’s good, but the Jefferson Stout, made with sweet potatoes and milk sugar (lactose) is something special, with notes of coffee and caramel, plus a hint of chocolate – even if it’s under the radar compared to the Southern Pecan.

Valor Ale – 14th Star Brewing Company, St. Albans, Vermont. First, you should know that 10 percent of all profits from the sale of this excellent hoppy red ale support the Purple Hearts Reunited INC., which is pretty cool, given that this is a veteran-owned company. One of the advantages of small-scale brewing operations is making a difference with your beer. When that beer is a super drinkable red ale, it’s a win-win, according to Major Justin Davis, a Vermont home brewer who served in Afghanistan with the brewmaster/owner at 14th Star. "Good guys, good beer, good charity."

Hopalicious – Ale Asylum, Madison, Wisconsin. The use of cascade hops gives it a decidedly citrus flavor – promising “bold hop flavor without the crazy bitterness.” If you live in the upper Midwest, this is fortunately an easy beer to get, both on tap and in bottles. Madison bar owner Chris Kalmbach, says he recommends it at the top of his list of the state’s best. Kalmbach says, “so hoppy you chew before you swallow.” Hop lovers can get into that.

Cropduster IPA – Thunderhead Brewing Company, Kearney, Nebraska. This is an “aggressively hopped IPA,” for lovers of the style. If you live outside Kearney, you might want to try Thunderhead’s Golden Frau Honey Wheat, which is available across the Midwest. Made with local honey, it’s sweet and delightful. A small college and farm town out on the plains, Kearney, though miles from Denver or Omaha, produces some great beer.

Columbia Kolsch Brand Ale – Ice Harbor Brewing Company, Kennewick, Washington. A gold medal winner at the 2007 North American Beer Awards, this is a lovely, smooth, golden ale that goes down gently, with a comparatively low alcohol content. Light body, fruity with a dry finish, this is just purely terrific. If you go in, catch live music at the brew pub as well.

Ostara – James River Brewing Company, Scottsville, Virginia. Named for the Germanic fertility goddess, Ostara is an amber ale with rich, complex malts and an 8.4 percent alcohol content to leave you hopping like the Ostara – er, Easter – bunny. I know Kelby, the brewer, and Jeremy, the “beer monkey,” at James River well, and they will not steer you wrong – and you might just catch both of them playing live music in the tap room. Virginia’s big cities have plenty going on, but it’s easy to be bullish on this newer brewery in the western part of the state.

Gumballhead – 3 Floyds Brewing, Munster, Indiana. Named for a cat in an underground comic book, this American-style wheat beer is brewed with Amarillo hops and American red wheat for a pleasant, citrusy, not-at-all bitter taste.3 Floyds (a father and his two sons) has grown from a small operation to a good-sized one with regular distribution, so you might just luck into this one at your favorite craft beer retailer. 3 Floyds has some excellent seasonal beers, as well as those in regular production. If they recommend you try something, do it.

Nefarious Ten Pin Imperial Porter – Ska Brewing Company, Durango, Colorado. Winner of the 2007 silver medal at the World Beer Championships Imperial Competition and the gold at the LA Fair International Commercial Beer Competition (American Imperial). This is a creamy porter with plenty of chocolate notes, coffee, a little sweet bing cherry, and it promises a “consistency as thick as Hershey’s syrup.” There’s a lot coming out of Colorado right now, and Durango is part of the region around which there’s a sort of “Napa” of craft breweries.

Unobtainium Old Ale – Straight to Ale, Huntsville, Alabama. This is a barrel-aged Old English stout, and it’s occasional, meaning you can’t get it all the time. It’s worth the wait, however – bourbon barrel ageing imparts great flavor: whiskey, vanilla, a little creamy oak. The name reference has to do with Huntsville’s space program history – a great example of how middling-size cities in Alabama can turn into fantastic beer sources just two years into small-batch production.