From Harriet Tubman's farm to the home base of the suffragette movement, discover places across America keeping women's history alive. 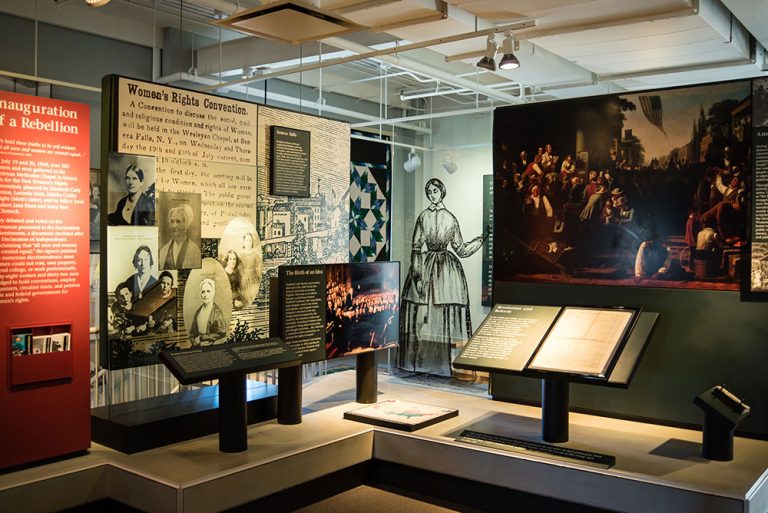 March is Women’s History Month, we thought it was the perfect time to highlight places across the country that honor the women who made amazing marks on U.S. history. Want to experience the lives of iconic women firsthand, or step into a landmark you’ve only seen in history books? Pay a visit to these cities, where the historic sites of women’s history are not only preserved, they’re revered.

From a self-emancipated slave to a conductor on the Underground Railroad, Tubman’s story continued in New York State. In 1859, she bought a farm from William Seward, a New York senator, but didn’t settle into her new home just yet. She was busy moving her family down from Canada. Then during the Civil War, she was a Union Army spy, scout and nurse. Upon returning, Tubman donated land to the African Methodist Episcopal Zion Church to open a home for elderly African Americans. In January 2017, the church and both homes became Harriet Tubman National Historical Park, a unit of the National Park Service.

Established in 2000, the Rosie the Riveter/WWII Home Front National Historical Park is a National Park Service site that has many remaining connections to what these civilians did for the war effort. See a Ford assembly plant, which put finishing touches on tanks and military combat vehicles, and the SS Red Oak Victory, the last surviving ship built in the Kaiser Shipyards. Find two childcare facilities and a hospital for shipyard employees. At the Visitor Education Center, see exhibits and films and meet real-life “Rosiesâ€ usually there on Fridays.

If the walls of The National Susan B. Anthony Museum & House could talk, they would say much about the reformer who lived here for 40 years. Here, she was arrested for voting in 1872 (which was, for her, illegal). Twenty years later, Anthony became president of the National American Woman’s Suffrage Association and made the Anthony residence its headquarters. It’s also where Susan left her legacy, dying in 1906 at age 86.

Often remembered for her White House years with her hubby, Mary Todd Lincoln has a special place of her own – literally. Her girlhood home, now the Mary Todd Lincoln House, was the first house museum in the U.S. to honor a first lady. Raised in a prominent Kentucky family, Mary mingled with politics way before meeting Abraham. Her father, Robert, was a state legislator, justice of the peace, and a Lexington city councilman. Following his death, the Todd family moved out. Their home went through many uses over time – from storage space to a boarding house – until finally becoming a museum in 1977.

Within this village, on July 19 and 20, 1848, the first women’s rights convention – known as the “Seneca Falls Conventionâ€ – met. Held at the Wesleyan Chapel, which still stands at the Women’s Rights National Historical Park, suffragist Elizabeth Cady Stanton declared that all women deserve full citizenship – including the right to vote. On the second day, a Declaration of Sentiments recorded other sought-after women’s rights, including owning property, custody of their children and access to higher education. Connected sites include Stanton’s house, also in Seneca Falls; the M’Clintock House, where the declaration was drafted, and the Hunt House in nearby Waterloo, which hosted a get-together that initiated talk of holding this convention.