America’s Kickball Boom: 5 Reasons Why This Sport Is Growing 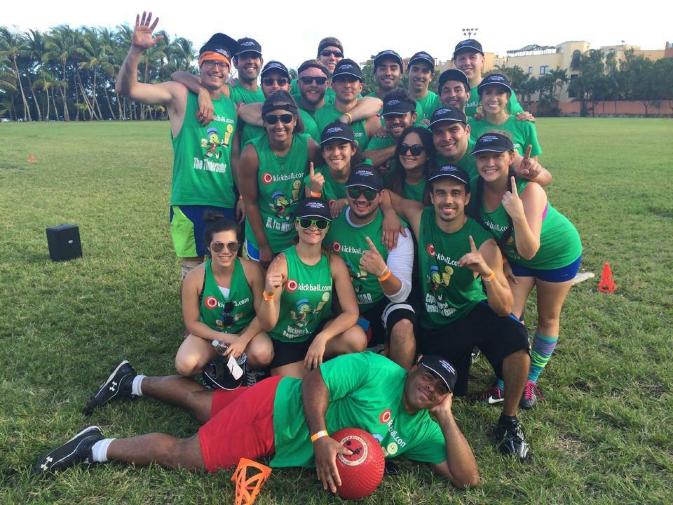 Although it’s hardly a new phenomenon, kickball is a fast-growing sport played by more and more U.S. adults, especially young professionals in their 20s and 30s.

From big-time leagues run by the likes of the World Adult Kickball Association (WAKA) and Go Kickball (GK), to office leagues and informal meet-ups, kickball continues to crackle as an “it” grown-up activity.

Why the boom? Here are five reasons:

Simplicity: As similar as kickball is to baseball and softball, kickball is much easier for most adults to master. Obviously, the ball is larger, and striking it doesn’t take the years of practice necessary to swing a bat like Derek Jeter. Also, the average American can grasp the concept of bases, outs, innings, runs and “hitsâ€ that kickball has borrowed from its traditional counterparts.

“It’s the perfect game to play with friends and coworkers because anyone can kick a ball,â€ says Sarah Nelson, marketing projects manager for the WAKA.

Nostalgia: Most of us have memories of playing kickball in gym class, at summer camps or in corner-lot neighborhood games. “It’s the same game people remember from the playground,â€ Nelson says. “Players love the chance to play a game that they remember from their childhood.”

Socialization: For many participants, kickball is simply a framework for hanging with friends and making new ones. “This is adult kickball, so some players do get competitive, but generally, kickball is just a ton of fun, and game play is very inclusive,â€ Nelson says.

The WAKA – with leagues in 35 states and a mailing list of 350,000 – trumpets the tagline “Best Parties. Best Games. Best Friends.â€ Stories of couples meeting, falling in love and exchanging vows abound, including one happy duo flashing their wedding rings in the WAKA’s promotional video. Go Kickball, which has a presence in 63 locations across 22 U.S. states, bills itself as “America’s Premier Social Experienceâ€.

Easy on Space: Ample baseball and softball diamonds are available in the U.S. for kickball use, but any good-sized, grassy area can be converted easily into a playable kickball field.

Social Suds: In many kickball leagues, adult beverages are part of the social mix – if not on the field, then at postgame parties.

One branch of kickball is anything but subtle about the connection: The rules of Kegball include: “All fielders must have a cup in their hand filled with a beer. Dropping your cup prior to a catch is not allowed, and doing so nullifies the catch. Kickers must have a full beer before they kick. Runners must finish their beer or throw it in their face before scoring.â€ And so on.

For some, socialization and suds intertwine.

“There’s nothing like sharing a beer and laugh with the CEO of another agency after he drops a pop fly,â€ says Dustin Fuller of DaviesMoore in Boise, Idaho, whose associates competed in a summer kickball league against rival advertising firms. “Being able to play with other agencies allowed me to interact with creative minds and outgoing personalities. I was able to build friendships and make connections with people in my industry. Important people. Fun people.”

Fun, indeed. Whether it’s served up with or without drinks, kickball has emerged from schoolyard obscurity to a place among America’s most cherished social activities for recreation-minded adults.

It’s the perfect game to play with friends and co-workers, because anyone can kick a ball.