An overview of the whiskey trails through Tennessee and Kentucky, with recommendations for best tours and visits. 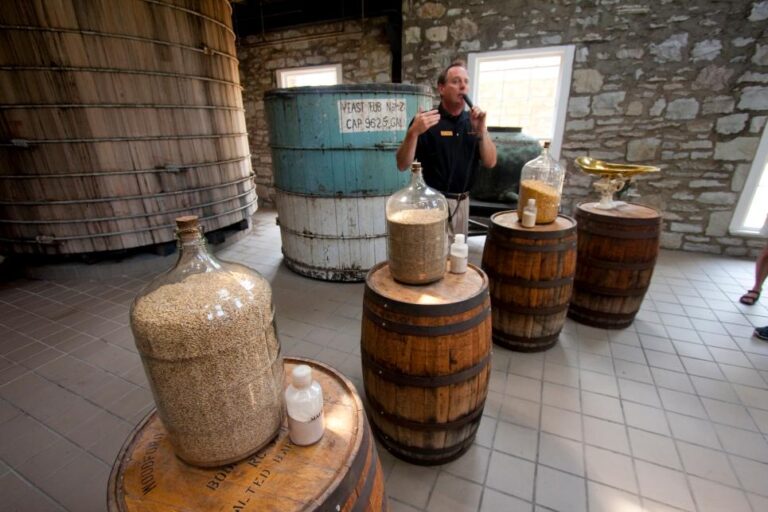 *Photo courtesy of Christopher/BlackBirdCD, available under a Creative Commons license.

Across the country, microdistilleries are taking off; whether you live in Oregon or Iowa, there’s probably something interesting happening. But the real cradle of whiskey and bourbon in the U.S. remains Tennessee and Kentucky, where the limestone filtered water produces excellent product, and where the history of both dates back to the beginnings of the country. Whiskey around here is an American tradition at least as old and venerated as apple pie – and they take it seriously.

To help you navigate these spirited waters, we’ve put together a primer on bourbon, whiskey, and tips for touring distilleries in Tennessee and Kentucky.

What’s the Difference Between Whiskey and Bourbon?

There’s a distinct difference between whiskey and bourbon: In short, all bourbons are whiskeys, but not all whiskeys are bourbons. In Tennessee and Kentucky, producers must adhere to strict definitions governing whether their labels can read “Tennessee whiskey” or “Kentucky bourbon.” That’s important now especially, as several of the large distilleries have been bought by multinationals, and some of those are now legally challenging those definitions in an effort to take shortcuts to making their beverages. Happily, the traditions in each state are winning the legal battles.

Both products must be aged in new, single-use, charred oak barrels. It’s vital because amber color and the distinctive butterscotch, maple syrup, vanilla and caramel flavors come from that wood, as over the years, the whiskey in the barrel aging expands and contracts with the temperature, seeping into the wood and back out again. A reused barrel won’t have the same power to impart the classic characteristics (though they’re great of aging other products, from beers to rum).

Tennessee whiskey must contain 51 percent corn mash and be free from any artificial colorants or adulterants, as well as be produced in the state. It ages for at least two years, which is why moonshine (white lightening, white dog, pick your term) can’t be classified as whiskey or bourbon – it’s not aged. Many use the so-called “Lincoln County” process, which filters the spirit through a maple charcoal. Kentucky bourbon has very similar requirements, with a minimum of 51 percent corn, blended with rye and malted barley; and of course, it must be made in Kentucky to carry that “Kentucky” label.

When you visit the growing number of distilleries, good tour guides will give you the exact statistics for their individual products, so you have a sense of the real differences – but it’s quickly obvious that taste-testing will tell you what you like best.

Ready to Tour a Whiskey or Bourbon Trail?

If you want to tour the distilleries in both states, major and minor, there’s plenty to experience. Below are some worthwhile stops, as you drive up Interstate 65 from the Alabama border, through Tennessee, to Bluegrass Parkway over to Lexington, KY (with a couple of side trips off I-65 in Tennessee).

Give yourself several days, because while you can absolutely hit five or six in a weekend, you should take more time if you have the luxury. Each stop is a new experience and well worth lingering. Don’t forget to take your favorites home for taste-testing and sipping with friends.

And while it’s always nice to hit the big names like Jack Daniel and Jim Beam, don’t miss the smaller distilleries that have popped up in recent years. You’ll be astonished at your discoveries. Most offer tastings as part of your tour fee, which is fairly inexpensive to tour at most places. Tickets typically range from about $5 to $15 per person and include a tour, tasting and sometimes a souvenir glass.

Jack Daniel: Lynchburg, TN is a great little town, but it’s a dry county, so don’t look to buy any alcohol except at the distillery itself. The tour is terrific for neophytes especially, who want to learn the basics of Tennessee whiskey. I highly recommend this as a first stop if you’re starting south and driving north, and the town as much as the distillery will delight you. Pure fun.

Prichard’s Distillery: A little off the road in Kelso, TN, Prichard’s is making a really good whiskey, and the rum is no slouch either. Master distiller Phil Prichard is a devotee of classic American styles. Prichard’s also has a new secondary location at Fontanel, just outside Nashville – a good plan if you want to take in a concert at the amphitheater there as well. It may not be a huge name, but it’s a fantastic product line.

Corsair Artisan: Darek and Andrew at Corsair were my first introduction to Nashville’s microdistillery world, and I can’t rave enough about both their Nashville, TN, and Bowling Green, KY, locations. They do several iterations of whiskey and bourbon, and also fantastic vanilla vodka, spiced rum, red absinthe, and a true ginhead-style gin with lots of juniper and citrus.

Nelson’s Greenbrier Distillery: The source of Belle Meade Bourbon, Nelson’s is a new take on a family whiskey with a history as rich in Tennessee as Dickel or Daniel. Their product makes the best possible Manhattan, in my opinion, and GM James Hensley is the go-to guy on artisan spirits and cocktails. Tours may need to be arranged in advance, so contact the distillery.

Short Mountain Distillery: You’ll have to drive to small town Woodbury, TN, to visit this one, but they get old school moonshine just right, and they know the old traditions as taught by whiskey runners from back in the day. It’s also a gorgeous drive, heavy on charm.

Woodford Reserve: I have bourbon-loving friends who call this one “mecca.” Woodford, owned like JD by Brown-Forman, is a smooth, rich, very drinkable product, with a long and intriguing story behind it. The distillery tour, like Jack Daniel, is a little like the Disney of bourbon, but it’s utterly beautiful country and the history of the place, with its stone buildings and rolling hills, will charm you completely. Watch out for the 18-year-old barrel storage mouser, Elijah. You’ve got to love a distillery that treats its cat so well – and its guests too.

Town Branch: Set in the midst of Lexington, KY, this new discovery is now high on my list of favorites. They make a bourbon that sips like an Irish whiskey (thanks to native Irish owner Dr. Pearse Lyons), and they also have a heck of a microbrewery as well, with seven or so options there for the tasting. The modern setting is lovely, with a bit of an Irish pub feel to the tasting room, a hop garden and a few more surprises along the way.

Barrel House: Tiny Barrel House in Lexington, KY is so new they haven’t yet bottled their first bourbon, set in casks six years ago. What they do have is a smooth, devilish moonshine – a lovely corn-based vodka with a hint of sweetness made for sipping, and a luscious oak-barrel aged rum with a butterscotch nose to die for. Their location happens to be Kentucky legend Elijah Pepper’s first bottling house, which seems very fitting.

Four Roses: Your father or grandfather may remember back when the good stuff from Four Roses all went overseas, and all you could get was a mid-level blended whiskey. Those days are gone. Since 2002, Four Roses (owned by the Japanese firm Kirin) has been producing exceptionally good, truly drinkable bourbon. The distillery showcases the original owner’s love of Spanish Mission style, circa 1910, when it was built. Try to go on a Saturday and get Heather Boggs as your tour guide – she might be the best guide I’ve had across both states.

Buffalo Trace: After Four Roses, grab lunch at a local restaurant in the Versailles area, then proceed to nearby Buffalo Trace. Like Woodford and Four Roses, it’s also a National Historic Landmark, and completes your sense of glorious, green, rural distillery locations. It’s set on land where buffalo long ago used to cross the banks of the Kentucky River. Buffalo Trace produces a dozen or so brands, including Blanton’s Single Barrel and Sazerac Rye Whiskey, along with some lesser known but worthy products.