Best Corn Mazes in the U.S.

Agri-tainment has taken root in America, as family farms offer corn mazes and other fall attractions. 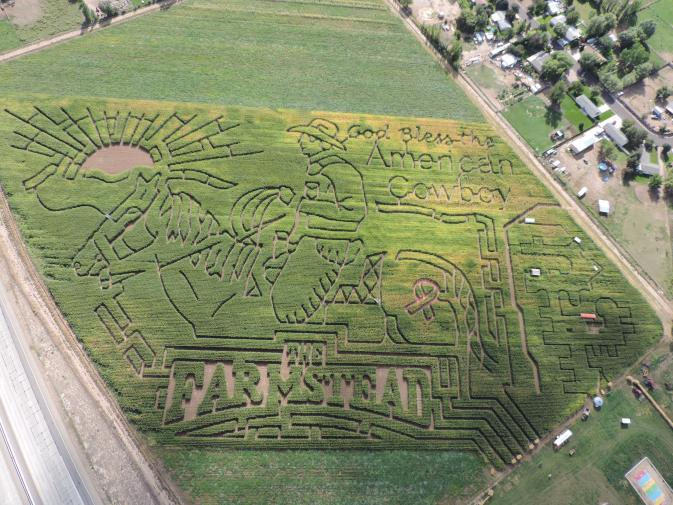 Photo courtesy of The Maize, Inc.

Old MacDonald’s farm has chicks, pigs and cows. These days, it also has a corn maze. The American version of ancient labyrinths and English hedge gardens, these tour puzzles set amid dense rows of leafy maize stalks are one of the most popular fall activities for people of all ages. This growing trend of down-on-the-farm fun is known as agri-tourism, or agri-tainment, which helps sustain American farmers by providing them with significant revenue during autumn.

Top corn mazes in America this fall include:

Now in its 18th year, this maze claims to be the Midwest’s original corn maze. You can also dive into their extreme 10,000-bushel corn pit, ride a camel and shoot pumpkin blasters.

A perennial favorite, the Patterson farm features a scenic maze that can be solved in 45 minutes or a more challenging maze. They are also famous for their Dead North haunted night tour starring animatronics and live actors. “It’s so scary that 120 adults wet their pants last year,” quips Mike Boudreau, who helps run his wife’s family farm. “The tour has sold out every fall for 14 years.”

Last year 65,000 people visited the most complicated corn maze in the world set on 28 acres with 11 miles of pedestrian puzzles. Maze maniacs have their choice of five maze games of varying levels, along with pig races, a zipline and goat walk. This fall, the theme celebrates the 200th anniversary of The Star-Spangled Banner.

Located in the heart of Pennsylvania Dutch country, this family-friendly farm boasts America’s most interactive corn maze, along with zany agri-tainment like a singing chicken show. The 2014 maze theme is “Music Through the Decades.”

In addition to a corn maze, the second generation of the enterprising Vala family has created over 50 attractions on their 212 acres. Take a train ride through a Western town, join the haunted paintball shootout and see the dragon show.

After designing the largest corn maze in the American West in 1996, agribusiness major Brett Herbst founded The Maize, the world’s-largest cornfield maze company. His own farm is popular for its Scary Tales & Smores, straw bale scavenger hunt and annual Pumpkin Smash: Destruction Days filled with activities such as pumpkin marbles, pumpkin seed spitting and the like.

The corn maze is just the beginning here. Don’t miss their Punkin Hollar with 500 creatively carved jack-o-lanterns glowing at night, as well as their new 30 horse merry-go-round with mustangs and carousel music.