By Stephanie Stewart-Howard on April 1, 2015 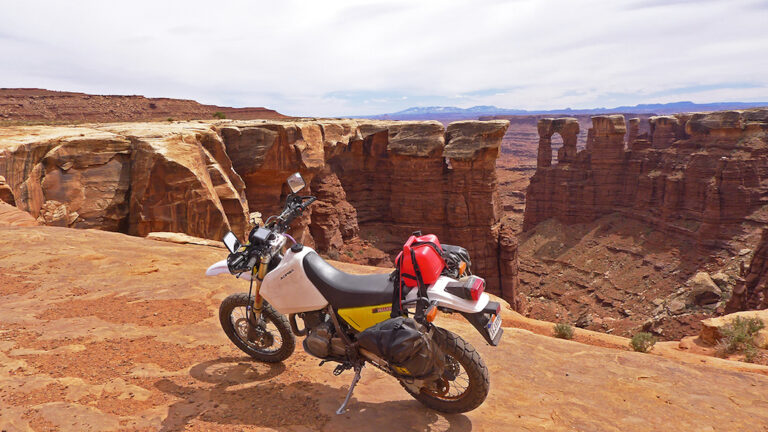 Twenty years ago, motorcycle riding wasn’t the great American adventure it’s become in recent years. Sales of motorcycles are up 91 percent since 1997, according to the National Highway Safety Administration. For some riders, that means tooling around town or the immediate vicinity of their homes, but for many others, it means long, spectacular cross-country trips. Col. Joe Stewart (USAF, ret.) and Mike Black, best friends and riding buddies, have been taking at least one 5,000-mile trip each year since 1992. They’ve ridden up and down the coasts and blazed roads in between. This duo can count half a million miles on a bike between them.

Stewart, now living in Tennessee, says they took their first trip together in 1992, when he was with First Data Corp in Omaha, and Mike with Ameritec in Chicago.

Mike met me in Omaha, then we went on to Utah and Yellowstone, up through Montana to Glacier National Park, to Jasper, Alberta, then worked our way back through to Mizzoula, Montana, then through Utah, Colorado, and back to Omaha. About 6,000 miles, Stewart says.

“We saw everything from the high plains to the Grand Tetons to Yellowstone’s one-of-a-kind beauty. There were places north of Bamff in the Canadian Rockies where on the 4th of July, there were still snow melt waterfalls coming from 2,000-foot granite cliffs, the water vaporizing before it hit ground.”

Twenty years ago, he says, there was still some suspicion aimed at guys on bikes. “We’d stop at a motel in an out-of-the-way place, and they had no rooms until you put down an Amex Platinum card. Then anything you needed was available.”

Today, things are very different, stemming from the explosion in motorcycle aficionados from a huge number of professions, ridding serious riders of old stereotypes. Joe and Mike were two of the guys who helped set those examples.

The reasons, Stewart says, things changed were various, but part of it comes from AMF selling Harley Davidson in the 1980s, and the quality of the bikes rising significantly and becoming more reliable. He started his cross-country touring on a 1992 Harley Davidson FXR, which he’s crossed the continent on no less than five times and still owns. Since then, he’s moved on to other touring bikes as well, over the years including a BMW 1100 RT and 1150 RT, and a Yahama FJR 1300 A he took across Utah, New Mexico and Arizona in 2014.

Preparation for the Long Haul

He’s got some serious advice for anyone planning a first cross-country ride. When it comes to a bike, he says, you want reliability – which is easier to find these days.

“You need to make sure you’ve got something that puts you in a reasonable riding position, not bent over like some popular ‘crotch rocket’ style bikes. You need something with good handling, good brakes, the kind of faring and windscreen that keeps the wind off you. If you’re going to ride a bike for 4,000 to 6,000 miles, you want a comfortable bike. You also need to think about luggage capacity if you’re going to be gone more than a few days.”

Above all, it comes down to confidence in the machine, he adds.

Stewart rides seriously, and he stresses the importance of knowing your bike and your capabilities before you hit the road for any long trip. His perspective:

Also of critical importance: “Don’t set an absolute itinerary. Our rule is ‘no schedule, no itinerary.’ Don’t decide you have to get to a particular place because you’ll end up missing the good stuff. If you pull into a small town, and you can smell the local barbecue joint, the people seem friendly, then go ahead – have dinner there, grab your post-ride beer, spend the night, and go somewhere else tomorrow.”

He also recommends keeping your groups small, with everyone able to keep up with one another.

So what are the best roads across the U.S.? “I like a road away from traffic, off interstates,” Stewart says. “As to the ‘best roads,’ I’ve ridden everything, and I get asked that a lot – it’s like having lived everywhere because of the military and corporate America; there’s a lot of good, and it’s all different.”

Here are Joe Stewart’s personal recommendations for the best rides – including scenic vistas and plenty of challenge – you probably haven’t taken yet.

“Everyone knows about the Tail of the Dragon at US Highway 129; it’s one of the best known sports car and motorcycle roads in the nation,” Stewart says. His offshoot takes you off 129, and onto North Carolina Highway 28. “In extreme southwest North Carolina, you’re going to take Highway 28 East to the crossroads at Lauada, N.C., then follow it south on 28 to Franklin, and then to Highland. Along the way, you’ll travel a stretch of road my father helped build with the CCC that passes right under a beautiful waterfall. Stay on 28 past Highland to the South Carolina line and into Walhalla, S.C. This is an absolutely great road; it starts out in the mountains, you’ve got plenty of change in elevation, lots of linked S-turns and a good road surface. Absolutely an outstanding trip.

if you loved your first trip, next time, take Highway 64 East out of Highland, N.C., to Highway 276 and turn north. This will take you up over the mountains to Waynesville and give you an incredibly scenic ride, as well as some great mountain roads. Waynesville, billed as the “gateway to the Smokies,” is a good choice of place to stay, too, with plenty of historic buildings and places of interest to visit. (It’s easy to access the Blue Ridge Parkway from here as well if you want to visit Asheville or go on towards Roanoke and Blacksburg in Virginia.)

One of the best rides in the state is a stretch between Naturita, Colo., and Grand Junction. Take Highway 90 into Montrose County and Naturita, then follow a 100 miles of two-lane roads, tracking the river through red stone canyons – the kind that remind you of John Wayne movies. It’s a challenging ride, and you’ll find yourself wanting to stop every 15 minutes or so just to enjoy the scenery. “Twenty miles or so west of Naturita, there’s a bridge over the river – cross it, park, take off your boots and shirt, and make use of the rope swing into the cold water. It’s great on 95 degree ride!” Stewart says.

“The stretch of U.S. Highway 191 at Alpine down to Interstate 10 at Wilcox is 100 miles of riding that will absolutely put you to the test,” Stewart says. The first third is full of big, high-speed sweeping turns through astonishing pine forests. The second third is more challenging sweepers and linked S-turns with great vistas over the valleys. The last third will have you doing linked S-turns in second, third and fourth gears, and will tell you very quickly just how proficient you are with a motorcycle. This is one of my very favorite motorcycle roads in the country.

Head south out of Moab on US Highway 191 to Blanding, then take Highway 95 West to Hanksville – half way there you’ll cross over Lake Powell on 95, then go west on highway 24 to Grover to enjoy the first 50 miles of high desert, leading to red stone mesas and buttes that are as striking as anything you’ll ever see. The colors range from bright red to deep purple; it’s just incredible against the blue sky. You’ll cross the Colorado River on the upper end of Lake Powell, and the mesas and buttes will suddenly be up close and personal. It feels like you can just stick your fingers out and touch them.

Highway 12 is a natural follow to the first Utah route, following through Grover and beyond. “Several travel groups have named highway 12 one of the top 10 scenic highways in the world, and for good reasons,” Stewart says. “You’ll be running the ridge of the mountains south to the high desert that looks like a moonscape then down to Ponderosa pine forests, then to the rock formations that Bryce Canyon is famous for. There’s an incredible change in scenery, and it’s all different. You just have to accept all the beauty you see for what it is, and you’ll love the challenge of the road as well.” Among the potential stops on 12 are not only the gorgeous Bryce Canyon, but nearby Red Canyon, Grand Staircase National Monument and Petrified Forest State Park at Escalante.