Hungry for some 'cue? Here are some of our picks for the best ribs, pork and sauce in the U.S. 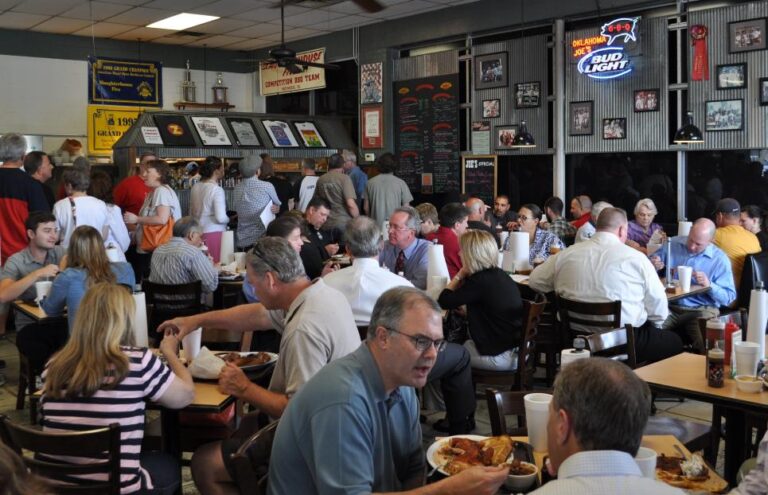 True blue barbecue buffs are usually willing to put in some effort and travel time when it comes to finding fall-off-the-bone perfection. And while barbecue eateries have become commonplace throughout the country, Texas, North Carolina, Kansas City and Memphis have long enjoyed “barbecue hub” status. When describing his own region’s barbecue profile, Kansas City-based food writer Doug Worgul offers a succinct appraisal of each region’s wheelhouse. “Kansas City barbecue takes the beef and sausage traditions from Texas, the ribs tradition from Memphis, and the pork traditions from the Carolinas and makes them its own,” he says.

With plenty of cold beer, neon signs and taxidermy, Angelo’s not only looks like a legit barbecue joint, it certainly tastes like one, too. Angelo’s menu superstar, the sliced brisket, is served by the plate or Texas-style on a white bun, loaded with mustard, pickles, onions and barbecue sauce. The pinto beans, potato salad and hot links are must-order items, too.

Like Angelo’s, Franklin deserves a top spot on any barbecue aficionado’s itinerary. A trip to this Austin institution requires some planning, as the menu of award-winning ribs, brisket and pulled pork is a lunch-only affair; when they run out, that’s it for the day. Hard as it may be, save room the Banana Bourbon Pie.

The under-sung treasure of the Memphis barbecue landscape, Tops has been serving its trademark pulled (or chopped) smoked pork shoulder sandwiches since 1952. Favored by locals, Tops also excels in the side-dish department – most notably with its potato salad and baked beans. This is no flashy tourist trap; it’s bona fide Memphis barbecue at its best.

The city’s darling of critics and customers alike, Central BBQ is well-acquainted with “best of” lists – and for good reason. Fall-apart ribs (wet-sauced or dry-rubbed) and hot wings (try the Jerk seasoning) are the pillars of Central’s menu, which also includes the celebrated BBQ nachos, house-made pork rinds and a great selection of local craft beers.

When Anthony Bourdain declares a restaurant one of the “13 Places to Eat Before You Die,” it’s worth a closer look. The original Oklahoma Joe’s is tucked into the side of a gas station, where regulars queue up for Joe’s ribs and burnt ends (the addictive and oddly delicious trimmings of a smoked brisket). As usual, Bourdain isn’t wrong.

Perhaps the patriarch of Kansas City’s barbecue family, Arthur Bryant’s perch at the top of the smokehouse food chain is secure. A favorite among locals, tourists and celebrities, Arthur Bryant’s smokes its ribs and brisket over top-quality hickory and fruitwood. Side dishes are straightforward but solid, including potato salad, baked beans and coleslaw.

This Durham mainstay delivers the quintessential North Carolina barbecue experience – plenty of slow-smoked pork slathered in a mustard-based sauce (sweet or hot tomato-based sauces are available for those who insist). Oak or hickory smoked ribs and pulled pork are crowd pleasers, along with the macaroni and cheese, collard greens and hushpuppies.

While some barbecue purists might be skeptical about the notion of blueberry-chipotle ribs, 12 Bones hasn’t had many complaints about their headlining menu item. This extraordinary rib treatment has delighted national food writers, locals and the leader of the free world himself. Be sure to enjoy those ribs with some corn pudding or jalapeno cheese grits.

Are you a foodie? Check out our collection of best food cities lists.