Elgin Park Is a Model Small Town to Millions 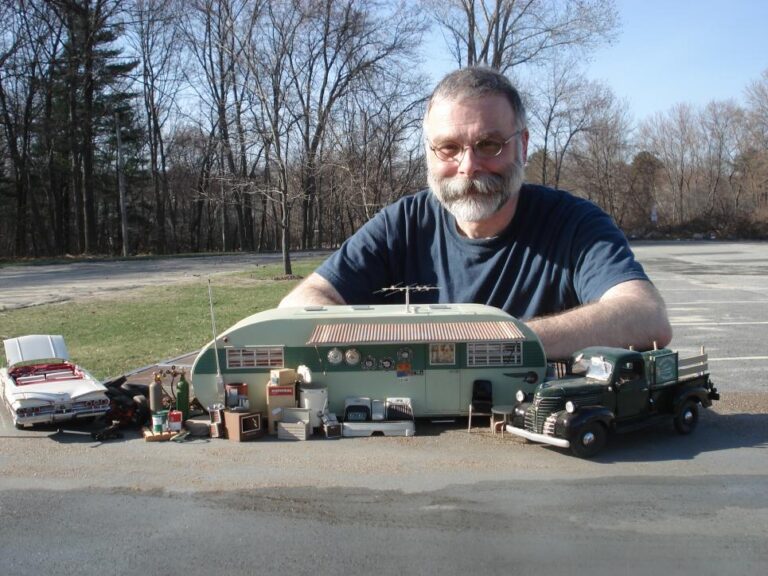 Elgin Park is like a small town frozen in time – just the way Michael Paul Smith and millions of viewers of his work like it.

Smith is creator of Elgin Park, a make-believe community he has created with cardboard models and die-cast cars. Photos of these scenes depict small-town America in the period between the 1920s and the mid-1960s.

“What started out as an exercise in model building and photography wound up as a dream like reconstruction of the town I grew up in,” Smith says.

Those photos have also created a treasure trove of emotions and memories for millions of people around the globe. His Elgin Park photos have generated 68 million hits on flickr.com over the past five years, and Smith receives emails from viewers all over the world. He also has his own website, www.visitelginpark.com. Smith, who lives in in Winchester, Mass., near Boston, has harnessed memories of being raised in a small community in western Pennsylvania and has turned them into a lifelong passion and hobby.

He gets his inspiration from a number of sources and means – photos, songs, movies or just memories of his past. He then proceeds to build a model around that inspiration or thought and photographs it, often using actual small-town buildings as backdrops. He keeps his scenes simple and always in scale. He does not use expensive cameras, lighting or fancy photo editing techniques. He is very careful not to over complicate his scenes, which he says this allows the viewer to use their imagination more freely. That’s also the reason he does not place people in his sets and photos.

“It allows the viewers to put themselves into each vignette, bringing their own personal memories and experiences to psychologically animate the scenes,” Smith says.

Elgin Park seems to speak to people on a deeper level, no matter what their cultural background or country is. Foreign viewers, who may have less familiarity with American culture, write that they still feel as though they have come home.

The name Elgin Park just popped into Smith’s mind. He says it just seemed like a good name for representing stability and presence, just the kind of qualities he likes in a small town.

“Building your childhood home is the best form of therapy one could hope for,” says Smith, who says his photos can stir memories both good and bad. “Model making is all about the quiet sense of time standing still.”

Smith’s says the time period of his photos was unique, and viewers have written to Smith, telling him his photographs have helped them distill their past.

What Makes a Good Small Town?

Smith has some definite impressions of what constitutes a good small town.

“A great small town is one you enjoy because it fits your memories of what life is supposed to be like,” he says. “It’s clean with good parks, neighborhoods with its own sense of what makes it unique. No matter whether it is a rich or poor community, there is a definite sense of pride in a good small town."

Smith believes it is also essential to preserve the past through such means as building restoration and historical documentation because it helps strengthen the emotional foundation of any town.

“A great town acknowledges its diversity and makes it available to everyone,” he says.

Smith has already published one book on Elgin Park, and he plans complete another one or two more in the near future.

“The photos have touched a very deep emotional chord from all walks of life and cultures,” Smith says. “I always wanted to affect the world in a positive way."

Millions of viewers of Elgin Park believe he has.