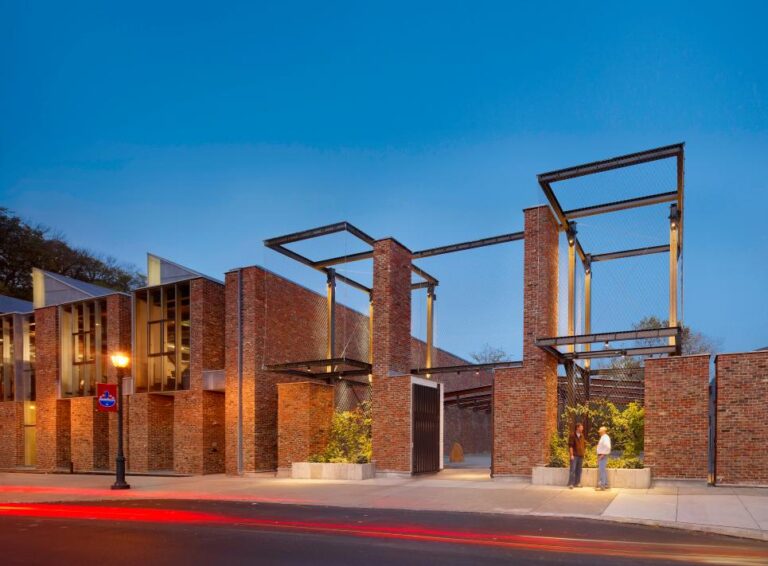 College campuses, especially those that have grown up as a central part of a city or community, often find themselves strapped for space as they expand. Rather than fretting about their need for a better, more flexible arts space, Lafayette College in Easton Pennsylvania actively paired with the city to explore possibilities. With the design efforts of Spillman Farmer Architects, an old, deteriorated automobile repair building dating to the early part of the 20th century was partially demolished, redesigned, and reworked to create a flexible, 7,000 square foot outdoor arts space, dynamically expanding outward from the existing Williams Visual Arts Center. (Spillman Farmer principal architect Joseph N. Biondo also played a role in that building's design, prior to joining the company.)

“The primary goal of this design was to integrate the college with the downtown and to create a gateway to the college,” says Biondo. “It had to be a complement to the arts building adjacent to the plaza to create a natural progression from the interior to the outdoors. It also needed to be as flexible as possible, to potentially house community events, a farmers’ market, and provide a space to show outdoor movies and well as provide teaching and performance area.”

The resulting raw, deconstructed space teems with potential, from black box style theatre usage to gallery to an outdoor teaching space with a plethora of uses.

When Spillman-Farmer first examined the building, they found the facades were in very poor condition, providing more inspiration to peel it down to bare structure and to reskin elements left standing to echo and gracefully extend the visual arts building, inspired in some cases by the texture of old brick work and concrete structures found during the demolition process, according to project architect Wayne Stitt.

Perhaps most challenging, the old buildings ran over Bushkill Creek, which had been completely hidden from view. Spillman Farmer chose to re-expose the running water, adding a natural element. According to Stitt, it provided one of the major challenges for the team. The architects had to work not only with the builders but also with oversight from the EPA and government agencies tasked with protecting the stream and its resident trout and rare mussels, from construction debris.

“We really had little clue the creek was there,” says Stitt, referencing it as the "hidden gem" of the project.

“We cut a slab out of the foundation to add the sound of the running water, making an ‘occulus’ for sight and sound,” says Biondo, adding that they repurposed an existing steel beam as a bench, and covered the opening with a metal grating so that the space over the creek can now serve as a stage.

“We repurposed an old, castaway building, working closely with the college and the community. When you have that kind of commitment, extraordinary moments happen. This was a ‘low road’ district, and the end result is a win-win. We worked with the college administration and key faculty, who helped drive the creation of an open, spirited space,” says Biondo. “It’s in line with what happened in the SoHo district in New York, as abandoned manufacturing spaces were repurposed and artists flocked to them.” He adds that it’s been proven time and again that the arts spawn economic viability, both in towns like Easton, with a population of less than 30,000, and in larger cities as well.

Spillman Farmer received a Citation of Merit from AIA Pennsylvania for their work on the Arts Plaza in 2013.