By Stephanie Stewart-Howard on February 4, 2015 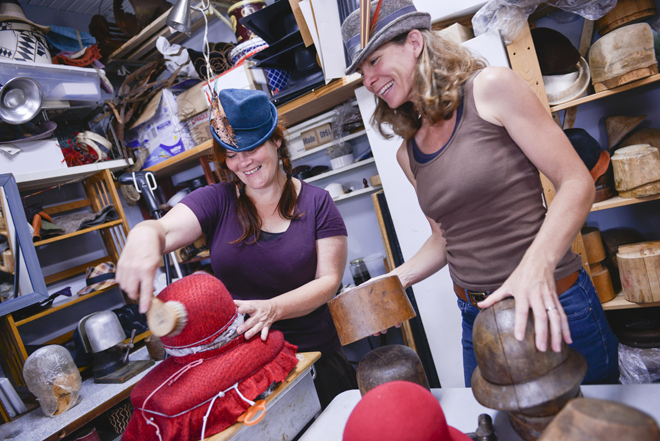 In the 1960s and before, there existed a strong local element to high-end fashion. People still had tailors, and nicer department stores still made up their house styles right there to meet your exact needs. Except for designer-produced couture, all of that has since been replaced by ready-to-wear lines directly off the rack; if you’re lucky, a good shop might hem your trousers. It’s a different world.

Back in the day, people had milliners and haberdashers too, to create the toppers that finished off one’s outfit. Today, with the rise of artisanship to prominence again, along with the growing popularity of hats after a long visual absence, local milliners are returning exquisitely constructed local fashion to the forefront and helping customers realize that couture is more accessible than they’d imagined.

Anna Zeitlin of Nashville, Swan & Stone Millinery in Brandon, Vt., and Q. Phia in Chicago all take decidedly different approaches to their artistry, but each has built a thriving local and Internet business producing extraordinary handmade works for a variety of customers and demographics. By making truly original pieces available to a nontraditional audience for couture, they’re helping to bring distinct handmade craft – meant to be worn, not showcased on a shelf – back into practice.

Nashville’s Anna Zeitlin studied film at Columbia College Chicago, taking fashion classes on the side. After Columbia, she learned hat-making in Los Angeles, New York, the U.K. and Paris.

“There just aren’t a lot of places to study in the U.S.,â€ she says, underlining that hats haven’t been a big part of the American fashion vernacular. “There are lots of reasons for that, I think. We just got more casual; we started to like the idea of suntans and big hair, and none of those things goes well with hat wearing … To understand the value of a handmade hat, you need to understand the process – it’s the equivalent of couture, completely hand sewn.”

In Los Angeles, Zeitlin worked for Louise Green, who mentored her, and she helped form the Millinery Guild of Southern California. In 2011, she returned home to Nashville, founded her own company Fanny and June. She set to work marketing to Steeplechase and Kentucky Derby goers, as well as doing some theater work, creating original pieces for all seasons and branching into fascinators for weddings and other occasions. Most of her sales come from custom orders, many via her website.

Hats Can Be a Source of Strength

By contrast, Nora Swan started her career at New York’s Fashion Institute of Technology and worked with designers, couture and theatrical. She left New York for marriage and a family, and returned to Vermont, where she met Sam Stone. They were the same age, in the same family situation, and Sam had a farm with sheep and was learning to felt. When their kids started school, they began collaborating, first with a line of children’s things, then adult hat-making.

Swan describes her work, which maintains that original ethos – hand-felted wools, local connection – as a “slow food of hatsâ€ – emphasizing a commitment to being local and using fine-quality custom materials. The custom dyed wool, with Vermont nature-inspired color, is paired with found objects from Steampunk – like gears, wire from a vintage Model T and metal findings to feathers from Stone’s farm.

“It takes less courage than you think to carry off a hat,â€ Swan says. “I think you’ll find it instead a source of strength and charisma, feeding energy back into you.â€ She adds that hats can evoke a sense of play, of humor, as well as a sense of self-awareness in the wearer.

Swan and Stone make most of their sales in person, through craft and other shows, but they have a website as they begin to navigate the world of larger Internet sales, and through it all maintain their chosen ethos, a tie to the land and culture of Brandon, Vt.

Q. Phia Sherry of Chicago started her couture career working with historical reenactor and Renaissance Fair costume, making things with theatrical rather than traditional millinery techniques. Studying under master milliner Eia Radosavljevic at the Art Institute of Chicago, she learned the very structured couture methods that now inform her work.

“She knew I came from a more theatrical style, that I cut corners where it wasn’t seen for efficiency,â€ Sherry says. But her own dedication to learning by doing meant each time she started a project she finished it in painstaking detail, which resulted in mastery of exceptional technique.

Q. Phia, Sherry’s line, proudly maintains a theatrical legacy – not only providing couture pieces (she also does a significant amount of clothing design, and her reputation is as a custom designer rather than strictly milliner) for individual buyers, but also marketing to a variety of theatrical and alt-culture markets, including burlesque and Steampunk.

Much like Swan and Stone, Q.Phia focuses on personal sales first, Internet sales second. “It’s difficult to purchase clothing and hats online because you don’t necessarily know if it’s going to look good on you, especially when you’re talking about spending that much on a hat,â€ she says.

Even so, each of these artists produces work that easily draws both face-to-face and Internet buyers. They have gradually built online presences to meet demand beyond the showroom, and custom commissions are available. After decades of the decline of the hat, it’s now back for men and women in full force, and behind that growth are not only mass manufacturers but custom makers reimagining what it means to wear a finely constructed piece of art as a style statement.