How Residents Worked Together to Showcase Their Art

The Public Library of Johnston County and Smithfield, N.C., needed the community's support to put a complete set of 51 Louis Orr on display. 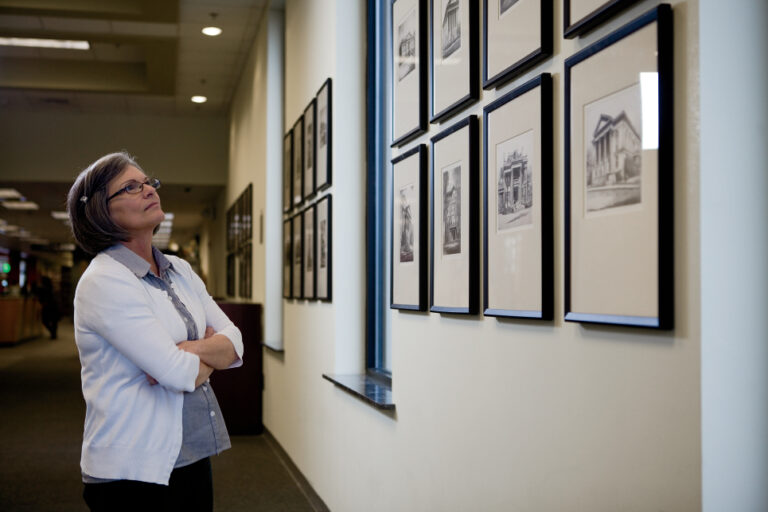 The Public Library of Johnston County and Smithfield, North Carolina recently put a long-hidden treasure on display for all to see, but it couldn’t have happened without the support of the community, who came together to raise the needed funds, and the efforts of Mr. John Hobart, who led the charge.

The “treasure” is a rare complete set of 51 Louis Orr etchings featuring North Carolina landmarks, produced between 1939 and 1951. Due to the prohibitive expense of framing, the etchings had been placed in storage after the library purchased them in 1967 for $1,390.50.

Queries from former library board members over the past two years prompted library Director Margaret Marshall to dig out the box and have the etchings appraised. Charlene Newsom, owner of Gallery C in Raleigh and an expert on the works of Louis Orr, valued the collection at $60,000.

While their monetary value increased dramatically over the years, it was the etchings’ cultural and historic value that moved long-time Johnston County resident John Hobart to organize the effort to raise the money to frame and display them.

“The citizens of Johnston County needed to see these historic buildings, mansions, sites, educational institutions, churches, courthouses,” Hobart says. “The idea was to make this hidden treasure available to the people of Johnston County by getting them framed and on display, so people can appreciate their cultural heritage as reflected in these etchings.”

Marshall notes that the long period of storage and preservation of the pristine etchings in acid-free sleeves and an acid-free box was fortuitous, “because by the time we got ahold of them, we had all of these modern technologies and materials at our disposal to frame them and hang them using the UV-protected glass and mattings.”

Even so, framing would cost upwards of $7,000. The project called for a fundraising campaign, and Marshall already had a full plate.

“As a library director, there are so many things you want to do, but there just aren’t enough hours in the day. So for Mr. Hobart to step forward and say, ‘I’m going to do this for you’ was just wonderful.”

Hobart didn’t solicit support through Kickstarter.com, and he’s probably never heard the trendy term “crowdfunding.” Nevertheless, he managed to raise more than the target amount with the help of a small task force that included James Narron, Wallace Ashley, Michael Creech, Kay Long and Denton Lee, all of whom sent letters and made phone calls to their neighbors and friends.

“I talked to various people in Smithfield and other places in Johnston County and asked them if they would contribute,” Hobart explains. “Some gave as much as $500, and others gave lesser amounts. But we had some significant contributions from various people who thought this was a good idea. And that’s how we raised $9,278.”

In October 2013, the library held a reception for the donors followed by an unveiling of its permanent exhibit, which features 30 of the framed etchings. The collection will be rotated to allow patrons ultimately to see all 51.