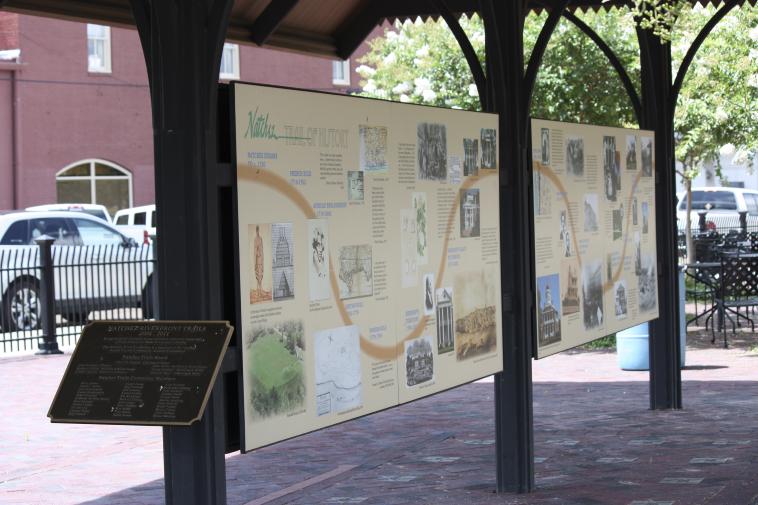 What can a city do to maximize a spectacular location and 300 years of fascinating history? Natchez, blessed with both, combined them to create a unique outdoor museum.

The Natchez Trails Project, a network of walking/running/biking trails, includes the city’s historic downtown as well as its fabled bluff with its expansive views of the Mississippi. Four trails – North and South downtown trails, a Bluff Trail and a Nature Trail – are dotted with visual panels, some 45 in all, that tell the area’s story in words, photos or illustrations. Born from a citizen’s modest suggestion back in 2006, the trails have become one of Natchez’s most popular tourist draws and a beloved amenity for residents.

“Our volunteer group, the Community Alliance, got to talking about the idea of a trail, and when we checked with other cities we found they were very popular – and something that could prompt economic development,” says David Gardner, Natchez city engineer and a passionate trail advocate.

In developing a vision for the project, the notion of incorporating history along the trails, a “museum of the streets,” presented itself. The oldest city on the Mississippi – European settlement began in 1716 – Natchez’s location on a bluff high above the river made it a commercial and cultural beacon throughout the 18th and 19th century, with quite a story to tell.

“Natchez has layers of history – Native American, French, British, American,” Gardner says. “People that flew their flag here, so to speak, left their mark, so there were a lot of things that could be interpreted in a museum of the streets.”

Volunteers supporting the project were able to net nearly $2.3 million from federal and state governments, and raised another $390,000 through a grass-roots campaign, an effort the Natchez Democrat newspaper called “among the greatest examples of public-private partnership we have ever seen.”

Indeed, the 5.6 miles of trails in the first phase of the project, completed in 2012, have been transformative for Natchez, boosting tourism, downtown economic life and local pride. The project even won an award in 2012 from the Mississippi Economic Development Council.

“Making people aware of their history has been great,” says Mimi Miller, executive director of the Historic Natchez Foundation, which has been instrumentally involved with the project from the beginning. “People love being able to walk up and down the streets looking at the trail panels. It’s put more people on the streets in a strolling way, and that’s been an economic boon.”

Refurbishing the area along the bluff goes on. The old train depot is undergoing renovation, and will become home to the Natchez Farmers Market and educational programs of Alcorn State and Mississippi State. The Bluff Park’s bandstand gazebo has been restored. A second phase of the trails will comprise four-fifths of a mile along St. Catherine Street, an historically rich African-American neighborhood. It will feature 32 panels and include the site of the city’s former slave market.

And a “bridge of sighs,” a dramatic arching bridge over Roth Street, will soon* connect two parts of the trail. Construction could begin in summer 2014, and when completed the bridge promises to be “an icon for the city of Natchez,” Gardner says. “It will be that beautiful.”