Slide the City Slips into Cities Across the Country 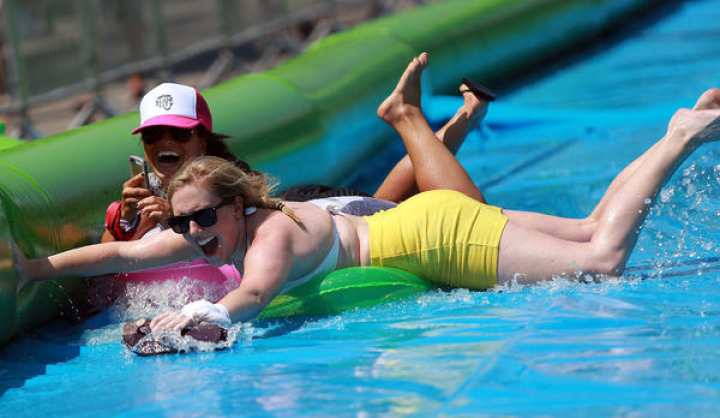 Courtesy of Slide the City

How’s this for a childhood fantasy come true? You’re standing at the top of a hill, holding an inflatable tube and looking down at 1,000 feet of soaking wet plastic covering what would normally be a busy downtown street. You get a running start, land on the tube and slide past office buildings, a park or maybe even the state capitol on your way towards a shallow pool. Sound fun? Good, because Slide the City is coming to a city near you.

Slide the City follows in the footsteps of obstacle course races and runs where racers crawl through mud, climb wooden walls, and get dosed with bright-colored corn starch. While those events are built to push participants to their limits, or at least make them sweat, Slide the City offers a more relaxed, summer block-party atmosphere. The main attraction is of course the blue and green slide, which sits on top of a foam pad and has inflated sides to keep sliders from getting too banged up. At 1,000 feet long, the slide can cover three football fields and features two runways.

How the Slide Got Started

“Slide the City was inspired by great memories of childhood slip and slides,” says Gretchen Willard, communications director for Slide the City. “One of the founders of Slide the City hosts an annual summer party with his friends and included a slip and slide to recreate those memories. One year, he looked at the hilly terrain of the city streets he lives near, and the idea to make a 1,000-foot slide the whole community could enjoy was born.”

That founder is John Malfatto, who is also behind such events as the Dirty Dash, Color Me Rad and Lanternfest. Malfatto and his partners first tested their giant slide in 2013 on Main Street in Salt Lake City, where Slide the City is based. Their first slide was only 400 feet long, and instead of a foam pad, it was placed on carpet. After working through a few kinks and creating a longer slide, they were ready to take the slide on the road.

Slide the City will come to more than 100 locations across the U.S. and Canada in 2015.

“We are very lucky in the fact that every day we get dozens of emails from people across the country asking us to come to their city,” Willard says.

Stacey Hamm, marketing and development director for the Parks and Recreation Department in Wichita, KS, was one of those people. Hamm and other leaders of the Wichita Parks Foundation were looking for a fundraising event that had broad appeal. Like many social media users, Hamm first came across Slide the City on Facebook.

“We were sitting around the boardroom talking about golf tournaments, but there are so many golf tournaments around the city, about 400 between April and August,” Hamm says. “We wanted to make an event for everyone. Slide the City is different and unique and something the city of Wichita has never had.”

Wichita is planning what will likely be the city’s biggest Fourth of July celebration in more than 30 years. While a firework show (which hasn’t happened in Wichita since the late 1980s) will be the main attraction at night, Slide the City will be the main event during the day. Hamm says the slide will be placed near the Lewis Street bridge, allowing sliders to zoom between the city’s baseball stadium and ice rink as they slip towards Sycamore Street.

Slide Set Up Takes Some Work

In order to get the slide to come to the city, Wichita has to provide about 120 volunteers, according to Hamm. Those volunteers will help set up the slide, take tickets, and make sure nobody is doing anything dangerous on the slide. City officials are still working through the permit stage of the event and must consider, among other things, what to do with the water that will pour down the street.

“That’s where we’re kind of stuck on things,” Hamm says. “We can hire a company to consume all the water, or we could put that water in a park, but with the chlorine in it, I’m not quite sure.”

The primary requirement for a location is that it must be in the central area of a city and on a downward slope. The slope can’t be too steep, but needs to be sloped enough to let gravity pull sliders down the course. Getting permits to close off streets, set up the slide and use as much as 16,000 gallons of water has been a challenge in some places. In most cases water used on the slide is circulated throughout the day then “recycled” and used for things like watering city parks or put back into the municipal water system after being cleaned.

“There is an extensive permitting process that can be quite challenging, but it is an important part of the planning process to work with city officials to make the best event possible,” Willard says. “We also encountered quite a few challenges when we were designing the slide. We have designed it to be safe and efficient, not to mention epically fun.”