Skip to content
Home > Experiences & Adventures > Stellar Cities: 6 Places in the US That Take Stargazing Seriously

Stellar Cities: 6 Places in the US That Take Stargazing Seriously

These small cities have worked hard to protect and enhance their most priceless amenities: dark skies and bright stars. 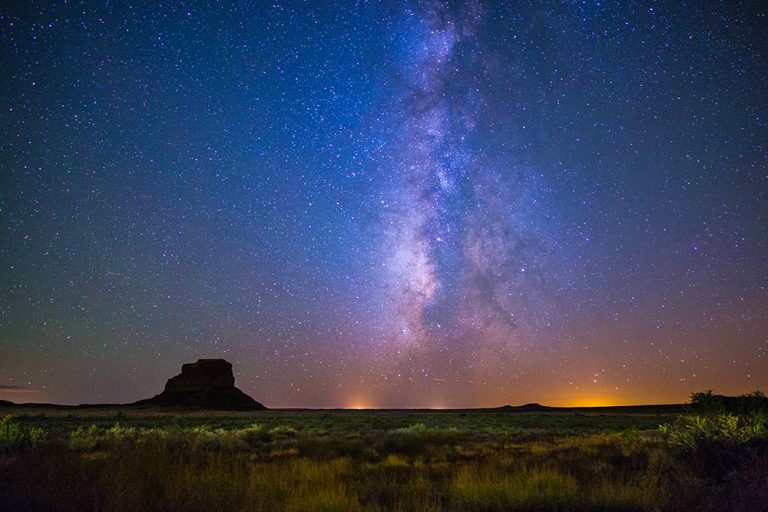 Look up at the sky in most big cities, and you can spot 500 or so stars — and that’s on a good night. But what happens when you tilt your head back in a designated dark sky park? It’s twinkle, twinkle lots of stars. In fact, in a dark sky park, you can see as many as 3,000 stars, according to the National Park Service.

At Livability, we specialize in small to mid-sized cities, spotlighting everything from tight-knit communities to hot job prospects. Now, ahead of International Dark Skies Week (April 22 – 30), we’re recognizing some of those cities around the U.S. that offer residents and visitors an extraordinary amenity: epic stargazing.

Why are dark skies important? Flashy billboards, street lights and other forms of artificial light are standard in big cities, but not only do they obscure our views of starry skies, all that light can also disrupt eco-systems. That’s because wildlife depends on Earth’s light-dark cycle to cue everything from reproductive patterns to protect themselves from predators.

Some cities have chosen to limit excessive artificial lighting outdoors. Consider it conservation efforts for the night sky, with the International Dark-Sky Association and communities across the United States working together to prevent light pollution and earning an official Dark Sky Designation in the process. There are 13 ‘dark sky communities in the United States when it’s all said and done.

Here are six star-studded communities across the United States that are going to infinity and beyond to protect their night skies and, because of that, are truly remarkable places to stargaze.

In 2001, Flagstaff became the first city to receive the dark sky designation. The Arizona city, home to Lowell Observatory and the U.S. Naval Observatory Flagstaff Station, has a long history of defending its darkness. According to the International Dark-Sky Association, the city enacted the world’s first outdoor lighting ordinance in 1958. Retired astronomer Christian Luginbuhl — a founding member of the International Dark-Sky Association’s Flagstaff Dark Skies Coalition chapter — says even in the city, Flagstaff residents can see the Milky Way overhead as long as they’re away from bright lights like streetlights. Luginbuhl says Flagstaff, as a community, has always valued its environment, including its surrounding forests, canyons, deserts and mountains.

All of that contributes to the “Flagstaff quality of life,” he says, and it’s a natural addition to include the visibility of stars in such a concept. “The designation has helped open people’s eyes at night,” Luginbuhl says. The city is also home to several scenic adventures that get people out and about.

One of only two cities in California with the International Dark-Sky Community distinction is Borrego Springs. Located in San Diego County, Borrego Springs is a desert oasis just waiting to be explored.

By restricting and modifying lights on public streets, outside businesses and even on residents’ front porches, Borrego Springs is a shining example of what it means to be a Dark Sky city.

Lending an assist is a high mountain range that shields the big, bright cities and towns of Southern California, as well as the 600,000-acre undeveloped wilderness of Anza-Borrego Desert State Park that surrounds the town.

An unexpected spot to stargaze? The Springs at Borrego RV Resort features a small observatory that houses an 11-inch diameter telescope and holds public viewings and lectures several times a year. In addition, visitors can also take a personalized tour of the cosmos with a telescope and renowned celestial tour guide Dennis Mammana, an astronomer.

Torrey (population 316), in southwest Utah, is the gateway to one of the state’s dark sky parks, Capitol Reef. Torrey resident Mary Bedingfield-Smith created a fundraiser to fund lighting upgrades in town and provide money for residents wanting to upgrade their lighting. The retrofitted lights direct light away from the sky, opening it up for a supreme stargazing experience.

The best way to enjoy Utah’s dark skies? Get out under a new moon if you want a chance to catch a glimpse of the Milky Way. If you’re worried about it being too dark…go on a night with a crescent moon! The moon will illuminate the ground enough to help you see without washing out the stars.

Also, wear warm clothes. Warm desert days can be followed by cold nights. And to really get this right, bring a star chart or download a stargazing app, ideally one with night mode, like ‘Star Chart.’ And finally, make sure to use a red flashlight to preserve your night vision.

Here’s some excellent news for your bucket list: you don’t need to travel all the way to Iceland to see the Northern Lights! If you can time it right, the Headlands International Dark Sky Park in Michigan will give you a show.

Headlands boasts 550 acres of woodlands, more than two miles of undeveloped Lake Michigan shoreline, and is located at the northern tip of Michigan’s Lower Peninsula. A county-wide light ordinance helps curtail artificial light. As for the park, it has a Waterfront Event Center and Observatory, as well as the Guest House, which is available for overnight rentals. In addition, the park celebrates its night sky with all kinds of events such as nighttime storytelling, starry cruises, star parties, astrophotography nights and more.

To best enjoy the area, bring a blanket and a red-filtered flashlight. (Leave the regular flashlights at home!) A good spot to be dazzled? Along the lakeshore in the Designated Dark Sky Viewing Area.

Located in Halifax County, the Staunton River State Park achieved its star status in 2015 after nabbing a dark sky park designation. Many exterior light fixtures were replaced with approved dark sky fixtures, including lights in rental cabins, residences and parking lots. The park, which is located in southern Virginia, also developed plans that made sure any future park expansion wouldn’t obscure the night sky.

Even before the designation, though, the Chapel Hill Astronomical Observational Society promoted astronomy and dark sky events in the park. The park’s “Dark Sky Observation Area” is a nine-acre field adjacent to the Visitor Center that shows off night sky views. The park draws astronomers and star enthusiasts each spring and fall for multi-day star parties.

The Chaco Culture National Historical Park will keep you entertained from sun up to well after the sun goes down. By day, visitors can explore the ruins in Chaco Canyon, which were the site where ancestral Pueblo people gathered for ceremonies and trading from 850 to 1250 AD.

Marvel at painted images on canyon walls, see scattered pottery pieces and visit Pueblo Bonito, which was once five stories tall and had 800 rooms.

At night, turn your attention to the sky. Chaco received its dark sky designation in 2013 by adhering to strict lighting guidelines. Plus, the national historical park holds several educational events and has a public observatory. Hotel Chaco in Albuquerque was inspired by Chaco Canyon, and several of the property’s architects and designers spent a few nights at Chaco Canyon to draw inspiration and illuminate their work (see what we did there?). In addition, the hotel offers guided day trips and overnight equinox glamping trips to Chaco Canyon through Heritage Inspirations.