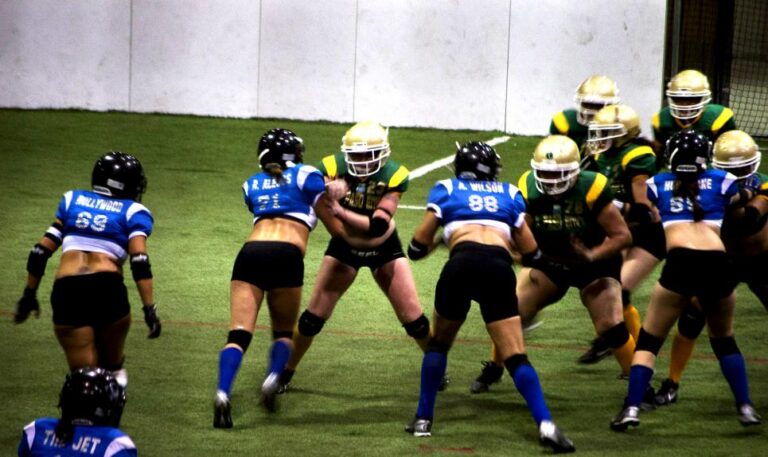 Women’s football has historically fallen into one of two categories. There are the full-pad, traditional football leagues where the women are buried beneath so much equipment that you can’t even tell they are women. And then there is the opposite extreme, the limited-contact lingerie leagues, where the ladies are all young, thin and scantily clad, looking more like runway models than running backs.

The rapidly expanding Sugar N Spice Football League is trying to find a comfortable balance between the two. While the women in the league do play in volleyball shorts and cutoff jerseys, they also wear helmets and shoulder pads, come in all sorts of shape and sizes, and engage in full-contact football.

“We want them to look like women, but play real football,” says Rebecca Garza, commissioner of the Sugar N Spice League. “They don’t just run around with their hands in the air and holler. It’s real football with real formations, real plays and real tackles.”

After some initial exhibition games between squads in San Antonio and Corpus Christi, an official five-team league was formed in 2012, with the addition of clubs in Austin, Laredo and McAllen. The league continued to expand throughout Texas in 2013, adding Brownsville, Houston and Dallas. Now the Sugar N Spice league has become more than just Texas women’s football, as new teams were founded in New Orleans and Oklahoma City for the 2014 season, which began in May.

“The problem (with women’s football leagues) in the past wasn’t the sport. The problem was the packaging,” Garza says. “In our league, people are getting to see real women who look like women play real football. We have a broader fan base because we’re not pigeonholing women. Now the grandmothers come to the games. The dads come to watch their daughter or wife. We’re appealing to more people instead of just one demographic.”

That, in turn, appeals to potential players. Michele Chavez is a nurse practitioner and mother of three children. She says she joined the McAllen Mystics in 2012 partly because of the league’s recruiting “everyday” women, which made her feel comfortable about playing.

“To play for this league is a realistic goal,” says Chavez, who is with the San Antonio Texas Cowgirls this season after winning two league championships at McAllen. “You look at our team, and it’s a melting pot of different women doing different things. People see us and say, ‘If you can do that, I can do that.’ And even if they don’t play football, we can be an inspiration for people to start walking and eating right and getting healthy.”

Garza says she regularly receives inquiries from other cities throughout the country about the possibility of forming a team, and says it is likely the Sugar N Spice League will expand again next year.

“I think the timing is right,” Garza says. “Women are not wanting any limitations anymore on what they can and cannot do. We’re proving that in every game.”