10 Farm-to-Pint Breweries You Have to Visit

From ground-to-glass, these breweries are sure to make your taste buds sing. 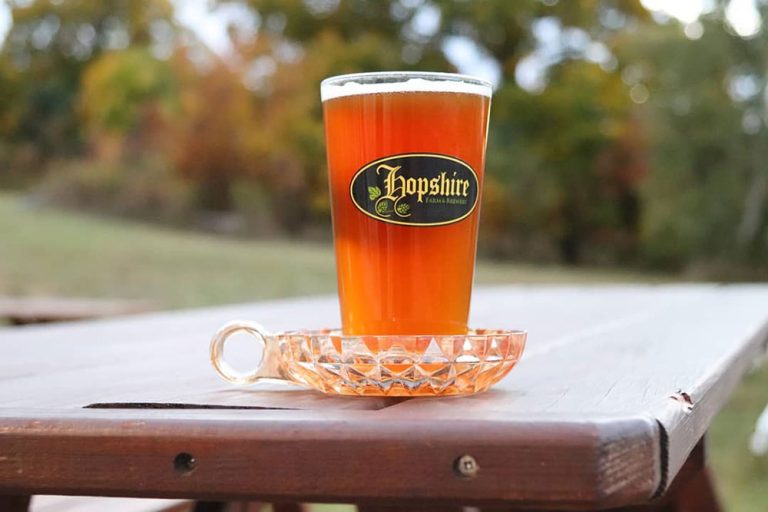 We all know about the farm-to-table trend, but how familiar are you with the farm-to-pint movement among craft breweries? You may hear it called ground-to-glass or field-to-pint, but they all have the same thing in common: a passion for using local ingredients to brew great beer.

We’ve put together a list of 10 farm-to-pint breweries across the country that not only source local ingredients for their beers but also come up with some remarkably creative and clever recipes guaranteed to make your taste buds sing.

There’s a whole lot to love about Montana, and Great Northern Brewing is high on that list. They launched their craft beer company in the breathtaking mountain town of Whitefish in 1995 and have been using local ingredients and drawing inspiration from the picturesque landscape of the Rocky Mountains ever since.

They offer a wide variety of seasonal flavors, first-time brews and flagship favorites, but their Wild Huckleberry Wheat Lager is the one that caught our eye. This flagship beer is made with juices from wild Montana huckleberries, which are considered the unofficial fruit of the state. With a clean and crisp foundation, this easy-drinking local beer is always a crowd-pleaser.

You may be surprised to discover Milkhouse Brewery started out as a farm rather than a craft beer operation. When owners Tom Barse and Carolann McConaughy purchased the 47-acre property in Mount Airy, MD, in 2008, they knew they would have to get creative if they wanted to make a living in agriculture on such a small scale. That’s when they decided to combine their interests in animal husbandry and brewing.

Milkhouse Brewery grows the Cascade and Chinook hops they use to make their classic European-style beers, and they recently launched a Stillpoint Reserve series that focuses on producing top-notch drinks using locally produced grains, herbs, honey and other Maryland-grown products. You can’t get much more local than that!

Located in Durham, NC, Full Steam takes great pride in bolstering local farmers and the agricultural industry by “buying local to brew local.â€ While they produce an impressively diverse collection of beer, including hazy IPAs, fruited kettle sours and tried-and-true classics, their mixed-culture foraged beers are the ones that earned them a spot on our list. Their Farm’s Edge: Ava is a Saison made with foraged wild grape leaves and elderflower, giving it a tart flavor similar to that of burnt sugar and dried fruit. And we’re not the only ones who think this recipe deserves two thumbs up. In fact, it has already won a 2020 Good Food Award.

Nestled in the heart of the Ozarks, Piney River Brewing Company has developed quite a reputation for the beers they create on their 160-acre farm in Bucyrus, MO. They’re no stranger to the farm-to-pint movement, having crafted one of their very first wheat beers using the illustrious black walnut, which is a well-known staple in the local area. In classic Midwest fashion, they even designed a distinctive roasted sweet potato ale that draws inspiration from the beloved sweet potato pie. You can’t go wrong with any of the beers made here, especially considering they’ve won countless awards for quality and taste. Plus, where else are you going to find such creative brews?

There are plenty of reasons to love Due South Brewing Company. For starters, it’s an independent, veteran-owned brewery that supplies beer to more than 1,000 local restaurants and stores. They also have a history of crafting each beer on site using a host of ingredients from local purveyors.

They order their honey from a nearby beekeeper, use espresso from a nearby roaster and purchase homegrown Florida oranges. Even though it may be more expensive to buy local ingredients, the owners are passionate about supporting other agricultural entrepreneurs in the region. And the flavor notes that come through in their beers make it well worth the effort.


A post shared by Humboldt Regeneration (@humboldtregenerationbrewery) on Jul 14, 2020 at 6:02pm PDT

If you want your business to stand out from the crowd, it helps to be the first California brewery since the Prohibition to make an entirely house-grown and malted beer. At least that’s what Humbolt Regeneration Brewery & Farm did to differentiate themselves from the competition. They grow all their own ingredients from the wheat and barley all the way down to the hops. They even have their own version of a Community Supported Agriculture program called the Community Supported Brewery program, where each member receives a weekly growler of beer straight from the source. Even if you can’t participate in their CSB, you can pop into their taproom and sample some of their 20-plus beers on draft.

Jester King Brewery is a combination brewery and kitchen that operates on 165 acres in Texas Hill Country. They have a deep passion for sustainability and diverse offerings in the form of tasting rooms, private halls and musical events, operating with a European-inspired farmhouse brewery model. They grow, forage and prepare everything from hops to grapes to use in their one-of-a-kind beers, including their unique Cerveza de Mesquite, which is brewed with fragrant mesquite beans foraged from the local area, and their Spon Cab Franc & Zinfandel, which is a blend of spontaneously fermented ale featuring Texas-grown wine grapes.

Located just a short drive from the Shawnee National Forest in Ava, IL, Scratch Brewing Company is one of those microbreweries you just have to know about. They made a huge splash at the 2017 Great American Beer Festival and were named by Outside magazine as one of the top breweries making foraged beers. They even received an accolade for being one of the most beautiful locations to enjoy a foraged beer. As far as flavor is concerned, the owners design beers much like farm-to-table restaurants design a dish – based in large part on what is available during the season. They use a wide variety of ingredients straight from the farm, including lavender, juniper, chanterelle mushrooms, nettle, elderberry and dandelion.

You can’t help but love Hopshire Farm and Brewery in New York. Their tagline is “beer from a farm, not a factory,â€ and they mean business. The state has a long history of hops production, and this brewery is keeping up with the tradition. They grow and utilize hops from their own backyard in their multitude of craft brews.While they don’t grow every ingredient on their farm, they make a habit of sourcing the rest from neighboring growers. They also have their own version of a hop kiln, which was commonly found at farmhouse breweries in the 19th century, and a gorgeous taproom with views of the rolling landscape.

Fox Farm Brewery is a far cry from your average brewery. If operating out of a restored dairy barn from the 1960s on 30 acres in Salem, CT, wasn’t enough to make them the talking point of the town, their culinary prowess might have something to do with it. Owners Mark and Laura Adams like to source as many local and foraged ingredients as possible when crafting their ales.

Some of their beloved recipes include heather, cherry and bog myrtle, an ingredient often found in gruits. They’ve even taken inspiration from Laura’s family’s vineyard down the road to create a unique double IPA featuring a whopping 1,000 pounds of wine grapes paired with New Zealand hops. But if you want to try something that is the very definition of local, you might want to look into their Norwegian-inspired farmhouse ales. Using ingredients from their farm and others nearby, every single ingredient grows within a 50-mile radius of the brewery.