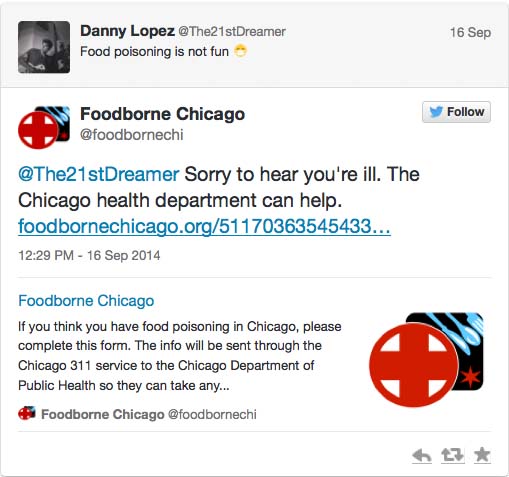 Chicago’s Department of Public Health is using the world’s most popular micro-blogging site in a unique way – one that is making a real difference in the health of its residents.

Twitter, which claims 271 million monthly active users sending 500 million tweets daily, is great for identifying trends at local levels thanks to its search capabilities. A user can search Twitter for all tweets containing any word or combination of words and narrow that search to a certain location using advanced search options. It has already proven to be a valuable safety tool during natural disasters, such as when former Newark, N.J. mayor Cory Booker famously used Twitter to find and respond personally to tweets from his constituents who needed help when a 2010 blizzard rocked his town.

Here’s how Chicago’s health department combines the service’s searching ability with its geolocation options to find offending restaurants: It uses a “tweetbot,â€ which is a computer program that can automatically and continuously search Twitter’s feed. The tweetbot simply searches for tweets that come from the Chicago area that contain the phrase, “food poisoning.â€ The bot sends the tweets it finds to department personnel, who screen them for relevance, then respond personally on Twitter to the users by sending them a link to formally submit a food poisoning complaint (see below).

The real-time aspect of Chicago’s strategy is what makes it work. Problems are identified, investigated and addressed quickly with on-site visits and inspections faster than ever before. It also gives health officials a way to be proactive, instead of reactive, identifying problems without relying only on diners who may be too sick (or just not motivated) to think of reporting their illness.

The new strategy is working. According to a report published by the health department with the Centers for Disease Control and Prevention (CDC), in the first 10 months of operation, project staff members responded to 270 tweets and received 193 complaints through their online form. Out of those complaints, 133 restaurants in the city were inspected, and 21 were closed down for violations. In addition, 33 others were identified as having critical conditions or serious violations.

Chicago’s unique way of combating health problems with social media is getting noticed. According to its CDC report, Chicago’s health department is in talks with officials from Boston and New York City to see if the program can translate to those cities. The department even made its tweetbot available for free on GitHub, a popular site for posting open-source programming code.

Twitter isn’t the only online source being used to spot potential outbreaks of ick, either. The CDC recently reported that New York City was using the online review site Yelp in a similar way, searching for a series of illness-related terms like “sickâ€ and “food poisoningâ€ with similar results.

… in the first 10 months of operation, project staff members responded to 270 Tweets, and received 193 complaints through their online form.