Skip to content
Home > Healthy Places > Summer’s Over, But This Technology Lets You Keep the Sunshine

Summer’s Over, But This Technology Lets You Keep the Sunshine 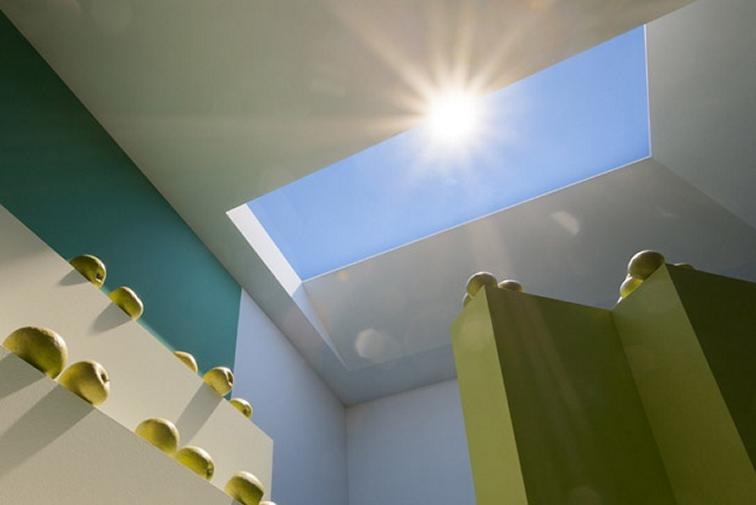 Imagine walking into a basement room but seeing summer sunshine streaming through the ceiling, banishing the winter blues. It's the work of CoeLux, a new LED light system that uses nanotech particles to trick us into seeing sunlight streaming from a blue sky indoors.

The CoeLux unit delivers light that looks like natural light from a ceiling- or wall-mounted panel that could be used anywhere it might be impossible to have the real thing.

Why go to all the trouble? Sunlight is a big deal when it comes to overall health. That's why the United Nations proclaimed 2015 as the International Year of Light to raise awareness of how light influences our well-being.

Artificial sunlight can help people battle what's known as Seasonal Affective Disorder. Lots of people feel like they have less energy in the winter. For those with SAD, lack of sunlight interferes with their enjoyment of life and work. For most anyone, exposure to sunlight helps reduce anxiety and leads to better sleep.

Daylight not only makes you feel better, it can make you smarter. A 2010 study showed that students working rooms lit by an increasing amount of daylight learned 20 percent faster in math and 26 percent faster in reading.

Professor Paolo Di Trapani of Italy’s University of Insubria worked on his sunlight emulation device for more than 10 years before solving the tough problems. Just putting some white LEDs behind a blue screen wouldn't do the trick. His team had to find a way to achieve a realistic 3-D effect to mimic the way light travels millions of miles from the sun to the Earth's sky within just a few millimeters.

The professor and his team developed a custom light rendering or projection system and software that employs white LED lights behind a plastic screen coated with titanium dioxide nanoparticles. Those particles create artificial Rayleigh scattering, the natural process that separates light into the blue atmosphere and yellow sun perceived by our eyes as it moves through the oxygen, nitrogen, and other gases in the atmosphere.

When you walk into a room, you may not notice the CoeLux emitting artificial sunlight. The entire system is built into an elaborate false ceiling only a few millimeters thick, and closely resembles an actual skylight.

With the flick of a switch, you could trick yourself into feeling like you're on a beach in the Mediterranean or walking along a fjord in Norway. The CoeLux can create the high, direct sun of the Tropics; the warm, low glow of northern Europe; or the medium hues of the Mediterranean. There's another set up that would reconstruct the sunset sky of a stormy day, but it hasn't been prototyped yet.

The developers hope to see CoeLux used to bring realistic illumination into spaces like hospitals, senior care facilities, subway stations, museums, or anywhere spaces where people are cut off from the feeling of well-being that natural sunlight delivers. It also could be used in cities where pollution blocks natural sunlight.

CoeLux could be just the cure for the winter blahs, or for people who work or live indoors or underground.