5 Parks That Will Make You Want to Move

These parks are the perfect place to play for kids and kids at heart alike. 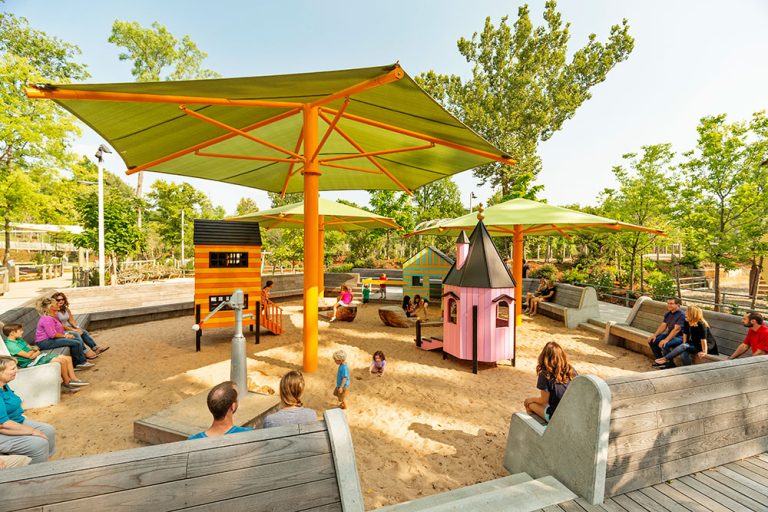 Give a kid a swing and a slide in any park, and they’ll be happy enough — but give a kid an imaginative wonderland of playground equipment, and they’ll have an experience they won’t be able to stop talking about (and begging you to go back). The best playgrounds are more than just a space where kids can blow off steam and where parents can get a few moments to themselves on a nice park bench; they’re community centers where people of all ages and abilities can get fresh air, free spaces to hold a birthday bash, and the best family reunion spots.

Tulsa, Oklahoma
The Gathering Place in Tulsa, OK, has gotten a lot of national attention — for good reason. Opened in 2018 on 100 acres of land near the Arkansas River, the Gathering Place has everything you could imagine in a good park: trails, gardens, an outdoor concert arena, and a boathouse to launch kayaks. But the main attraction is their covetable, sprawling playground.

Located outside of Chapman Adventure Playground is Charlie’s Water Mountain, a water exploration station perfectly designed to beat the Oklahoma summer heat, complete with funnels, a giant water pump, and plenty of areas to pour water on your friends.

Still not enough? There are also two other separate play spaces outside of Chapman Adventure Playground:

Completely overwhelmed? The Gathering Place has an app for parents who want to plan ahead of their visit — because there’s nothing quite like walking with an overstimulated five-year-old without knowing exactly where your destination is.

McLean, Virginia
Clemyjontri Park in McLean, VA, is whimsical, colorful, magical — and one of the best spaces in the country for kids of all abilities to play. This playground was designed to be accessible so that all children could enjoy it, regardless of their abilities.

Some of the incredible accessible features include ramps to elevated play areas, wide pathways between play structures, and the pièce de résistance, the Liberty Swing. This is a swing that allows wheelchair users the ability to sit and catch some air — just like other children get to do. Parents or guardians must sign a waiver and have a key to unlock the swing area and swing, so be sure to plan before your visit if you will be using the Liberty Swing.

Another fun feature of Clemyjontri Park is the Rainbow Room, which is (you guessed it) colorfully painted and integrates pictures and language, sign, and Braille so that all children can learn their colors of the rainbow — after they take a turn at the many swings in the area, of course.

As if you needed more reason to go, Clemyjontri Park also houses a carousel in the center of the action and a trackless train with a ramp so that all can easily enjoy it.

Toledo, Ohio
Secret Forest, a multi-level, all-wooden play structure nestled in the botanical gardens in Toledo, OH, is what natural park dreams are made of. The idea behind the park is to connect children (and adults) with nature, which is easy enough as the playground is amidst the trees and a nearby pond complete with koi fish and water lilies.

Among the playground, features are two suspended rope bridges for kids to run, jump, and crawl through. (And for the older children, a particularly steep rope bridge goes all the way to the tippy top to a lookout area). In addition, there are tree trunks of different sizes that have rock climbing grips on the sides so your mini acrobats can test their strength and agility. There is a honeybee-hive-inspired structure for the littles to climb inside, as well as small wooden steps suspended by ropes that are perfectly suited for small children to swing on and older children to use as an obstacle course.

Cambridge, Massachusetts
If there’s one thing you can guarantee at the Alexander W. Kemp Playground in Cambridge, MA, is that your kids won’t get bored. From slides built right into the hilly landscape to loose blocks of wood for kids to build a giant tower (or simply see what happens when they toss them onto the sand), this playground is designed for kids to learn through play. The park also features a water play area, where children can operate a crane and pour water down a twisty turny path — perfect for hot summer days when you simply need to get the kids out of the house.

And although Cambridge sees its fair share of snow in the winter, kids can sled year-round down a sand hill — just remember to bring your own sled (AKA a piece of cardboard from your Amazon packages).

Governor’s Island, New York City
Have a kid who likes to teeter on the edge of danger at any given moment? Then they’d love The Yard, located on Governor’s Island in New York City. This playground, open on weekends from 12-4 pm from April to November, is designed for children to tinker and learn risk management through the use of nails, hammers, saws, paint, wood, and other things that children are encouraged to build on and/or destroy.

Parents aren’t allowed in the playground section for older children (ages 5 – 19), but don’t worry — several playworkers are on hand to ensure your child is safe while they explore the play area. A separate space for younger adventurers allows parents but still incorporates play:groundNYC’s top priority, which is to support children to direct their own play (AKA don’t butt in, mom and dad).