An Ode to the Community-Building Power of the Porch

Want to build community and attachment to where you live? Scientists and neighbors agree: a front porch is just the ticket. 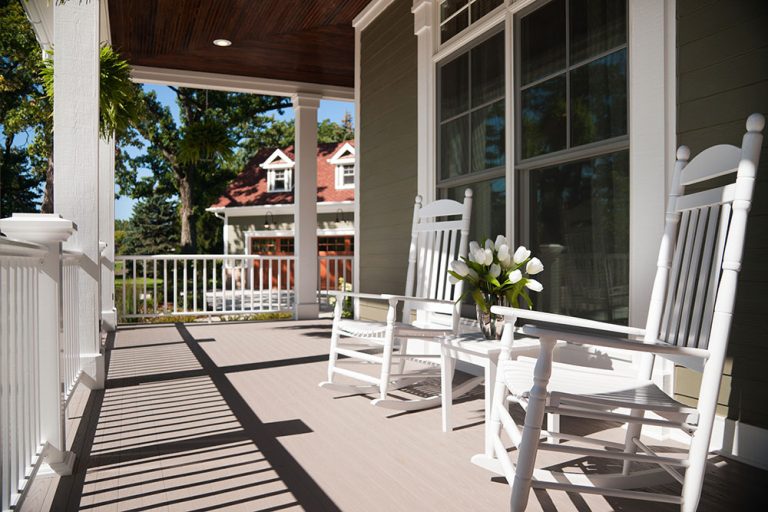 You don’t buy a lot and build a brand-new house without thinking for about a bajillion hours about the kind of place you’d like to have. For my husband and me, those bajillion hours distilled down to a few core principles rooted in everything I’ve ever learned about place attachment:

Even as I obsessively pinned pictures of backsplash tile, I knew that where we built in our adopted hometown of Blacksburg, Virginia, would go a long way toward determining our happiness with what we built. Hence we hunted and nitpicked until we found a vacant lot surrounded by 1960s brick bungalows occupied, in some cases, by the original owners. Some of those neighbors brought us dinner or cookies after we moved in. The evergreen views somehow remind me of coastal California. I’ve walked downtown, to the library and the farmers market and the Mexican restaurant, half a dozen times already. Where we built turned out to be the perfect spot.

As for what we built, among the items that made it from wish list to reality is the covered front porch that runs with the width of our Craftsman-style bungalow. I imagined myself with a gracious front porch, wide enough for sitting, for years and years before I finally managed to create one, and judging from the proliferation of porch pics on Pinterest, I’m not alone. Even Kevin McCloud, ridiculously eloquent host of the British television show “Grand Designs,” confesses that he dearly yearns for the front stoop of the American dream. “I one day want to be able to sit on a wide, covered porch in the open air, the dry and the rain all at the same time. Half in, half out, and yet neither.”

The porch is the one spot in our new home that fills the breach between outdoor and indoor, public and private, community, family and self.

The “half in, half outâ€ aspect of a front porch is what makes it such a brilliant asset for falling in love with your community. It allows keen observation of your place (a key method, in my opinion, for coming to love it), encourages conversation with neighbors and renders you approachable. In warm weather it’s the ultimate spot for socializing. At a party the other night, I noticed that the generous front porch lured guests to linger; some never made it past the front door.

A front porch may magic up neighborhood cohesion naturally; other times we have to help it along. My friend Dawn’s parents developed a weekly Sunday night “open porchâ€ tradition where they’d pop popcorn, stir up some lemonade, and make sure friends and passersby knew they were welcome to stop and chat – a far less pressured way to meet up than a sit-down dinner.

Other communities have made porches a quasi-official nexus of town social life. Scott Doyon, of the national urban design and planning firm PlaceMakers, alerted me to a project he brought to his town of Decatur, Georgia. “I’m big on using Decatur as a sort of laboratory for ideas and how those ideas can help shape and strengthen community,â€ he wrote me. “One such idea, which I stole (with their blessing) from Ithaca, NY, was founding the Oakhurst Porchfest.”

How to Love Where You Live: Take a Walk

Porchfest, as Doyon points out, got its start in Ithaca, New York, in 2007, the result of a few neighbors chatting and playing ukulele outside together. Brainstorm! Why not invite others to play music in their neighborhood? That first year, twenty bands played on neighborhood porches; in 2016, it was 185 bands. The concept of a homegrown musical festival with a relatively easy-to-reserve venue – the porches that proliferate in historic neighborhoods – is so delightful that PorchFest.org now counts 115 of them across North America in places like Chicago and Philadelphia, Ferndale, Michigan and Grants Pass, Oregon; San Diego and Livingston, Montana.

Designing a house with such a wide front porch added thousands of dollars to our bottom line; in builders’ terms, it’s a pointless dead space that runs at practically the same cost per square foot as our living room.

But for us, the porch is likely to make us more attached to our neighborhood and our town than the pull-out garbage cans or the oversized pantry in the kitchen. It represents what I want my house to be: sheltering and communal, private and welcoming, a quiet vantage point from which to greet the whole world.