Skip to content
Home > Love Where You Live > Beyond Bike Lanes: Services for Two-Wheeled Commuters 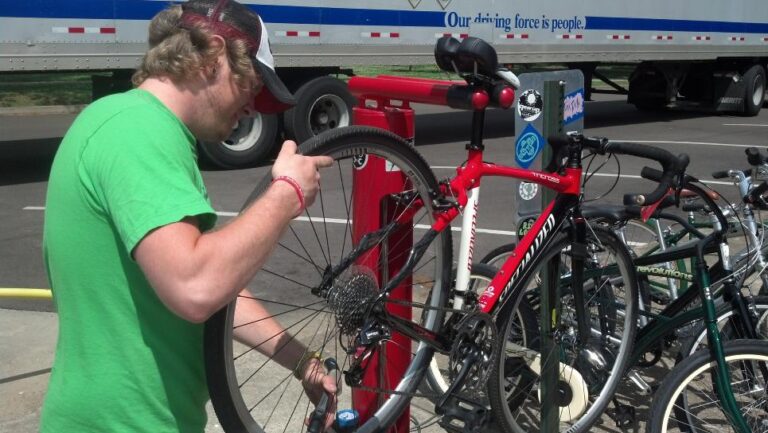 Matt Falwell, who owns Gear Up Cycles in Murray, Ky., says his shop has always been happy to pull out a pump for a low bike tire or a wrench for a handlebar tightening when local cyclists pop into the store.

But lately, thanks to five, bright-red bike “fix-it” stations installed around town with funds provided by a federal Livability grant, Falwell’s shop finds itself focusing more on serious repairs and refurbishments.

“It was little things that riders would come in and we would just do for them,” Falwell says. “By having these fix-it stations, cyclists can take a quick break from their ride and make the minor adjustments themselves.”

The fix-it stations include a pump, tools and QR codes that riders can scan to pull up basic maintenance instructions – such as the proper way to adjust handle bars – on a mobile device. One station is located outside Gear Up, two on the Murray State University campus, and two more in the city's parks system.

To be sure, the Livability grant benefited more than just cyclists. It allowed Murray to improve its sidewalks – specifically adding new sidewalks leading toward the city’s transit station – and to install bike racks along with the “fix-it” stations in high-traffic areas. Taken together, the projects aim to improve livability for those who walk or cycle for fitness and recreation, as well as for two-legged and two-wheeled commuters.

The Murray Calloway Transit Authority applied for the Livability grant, and the City of Murray has administered it, says David Roberts, the city’s director of planning and engineering.

“The sidewalks promote better health, walkability and access for pedestrians, especially in areas where they weren’t available before,” Roberts says. “They add value to our city as we seek to be a progressive place that promotes healthy living and connectivity.”

The projects are the latest indications of a stepped-up focus on community activity in Murray, Roberts says – and from bike-shop owner Falwell’s perspective, residents seem to be picking up the pace.

In the four years since Falwell, a Murray native, returned to town and opened Gear Up, he has noticed “a huge increase in recreational bikers, bicycle commuters, triathlon cyclists and bike racers. We see consistent growth in the number of people out riding, more races and charity rides, and all of that certainly is a good thing for our community.”

Falwell – far from just a bicycling partisan – adds that “the new sidewalks have been fantastic, increasing foot traffic and improving safety for the community.”

As for Roberts, he sees Murray’s healthy additions as, well, concrete ways of amping up the city’s appeal to potential new residents and businesses.

“When you have entities looking to relocate to Murray, they evaluate the overall efforts made by the city,” he says. “We feel that we are moving forward in a positive direction to make our city more pedestrian- and bicycle-friendly. And we have heard nothing but positive feedback.”