Skip to content
Home > Love Where You Live > Can You Guess Which Fictional City Most People Want to Move to?

Can You Guess Which Fictional City Most People Want to Move to?

If you had to decide between make-believe cities like Pawnee, Narnia and Gotham City, which one would you choose? 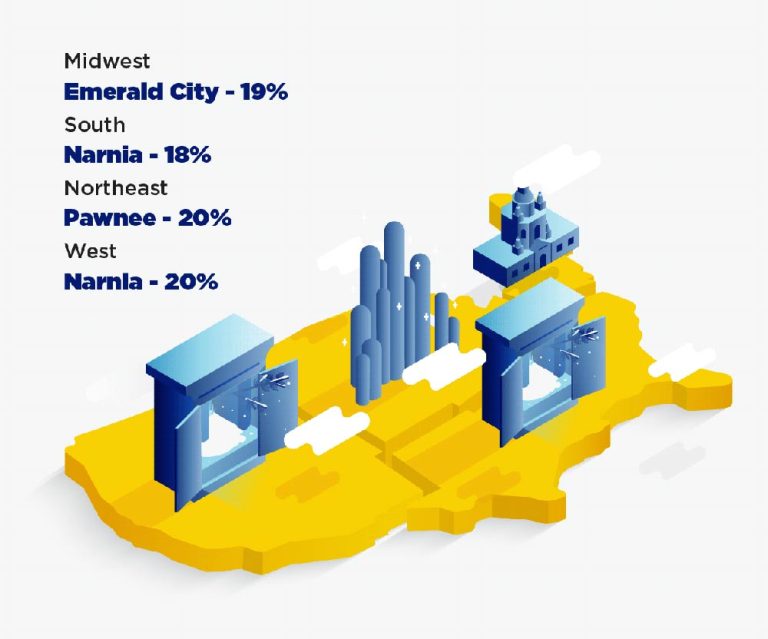 Here at Livability.com, we spend a lot of time thinking about cities and all the things that make them great places to live, work and visit. Our normal focus is small to mid-sized cities, but a recent survey got us thinking about a very different kind of city: the fictional kind.

Simply Self Storage asked 1,000 people to choose where they’d most like to live out of the following cities, towns and lands from well-known movies, books and TV shows:

It turned out to be a very tight contest, with Narnia clinching the overall win by just ONE percentage point over Pawnee and Emerald City, which tied for second place. In last place? Wonderland, which garnered only 9% of the vote. Poor Alice.

The most popular fictional cities change dramatically when you filter the results by gender. Perhaps not surprisingly, male respondents jumped at the chance to relocate to Star Wars’ Cloud City:

Meanwhile, female respondents couldn’t resist the pull of the Emerald City from “The Wizard of Oz.” Narnia came in second, and Cloud City was dead last:

Interestingly enough, answers also varied greatly based on where respondents lived. People in the Midwest lust after the Emerald City, while the South and West choose Narnia, and the Northeast dreams of living in real-life Pawnee.

So, which one would you choose? If nothing else, this is a great conversation starter for holiday parties.

And if you need some help figuring out which REAL city you’d like to live in, don’t worry, we’ve got you covered.