Skip to content
Home > Love Where You Live > Climate Change: What It’s Like to Move Up North

Climate Change: What It’s Like to Move Up North

Moving from South to North brings many unexpected surprises and pleasures. 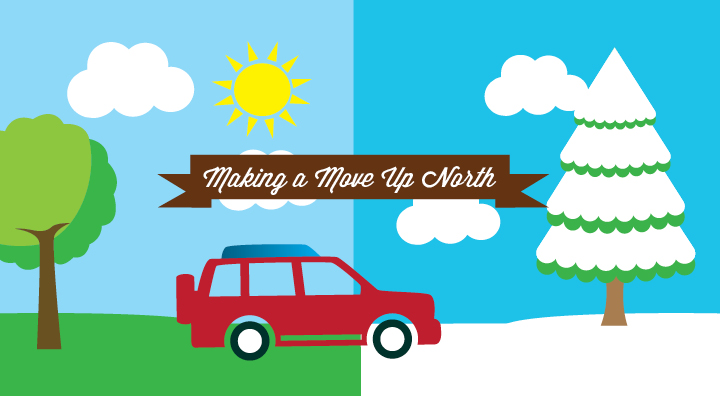 We’ve all heard the tales of Northerners who move south in search of a warmer climate. But many people also are moving to the North from southern states for jobs, schools or to live closer to family.

Those who have made the big move from South to North say there are many things to learn, and unexpected challenges and rewards.

WINTER WONDERLANDS: The Best Winter Cities to Live in.

Carolyn and Mike Barnes moved to Amherst, Mass. from Oak Ridge, Tenn. 11 years ago with their two sons, Curtis and Austin. They say they were drawn to the northeast to be closer to family members who live in neighboring states and because they wanted to provide their sons with opportunities to grow up in a diverse community. Carolyn says their first impressions of the North were of a cooler climate and higher housing prices.

“Living in New England is comfortable and quaint and fun,” she says. “I love the walkability factor of Amherst and the focus on education. There are not many places left in our country that still look like they did a couple hundred years ago — history is cherished and preserved here.”

MORE THAN JUST CHOWDAH! The Best Things About Living in New England.

When their first winter in Massachusetts began, the Barnes family was enchanted.

“The first couple of snowfalls were beautiful, and sledding and ice skating were fun,” says Caroline, who was raised in Houston, Texas. “And then winter went on and on and it was brutal at times.”

On the other hand, Mike, a chemistry professor at the University of Massachusetts, says he likes the fact that every month of the year in Massachusetts has its own identity and autumn is “truly spectacular.”

There are other reasons to appreciate the more dramatic change of seasons.

CRAVING SOME SUN? Here are five cities to escape winter.

That first winter is not the only challenge that displaced Southerners must experience. A faster pace in many parts of the North often surprises native Southerners who are used to taking life a little slower. And there are other differences.

Artists Allison Orr and Blake Trabulsi recently moved with their two children, Genevieve Trabulsi-Orr, 9, and JoJo Trabulsi-Orr, 4, from Austin, Texas to Middletown, Conn. where Allison is a guest scholar at Wesleyan University.

“We miss Southern hospitality,” says Blake, a graphic designer. “There is a certain openness, friendliness, eagerness to connect and socialize that is, let’s say… different in the South than in the North.”

Allison, a native Texan who choreographed the award-winning film Trash Dance through her Forklift Danceworks, agrees. “The sometimes tough northeastern exterior was something to get used to. We have great neighbors in Connecticut and have met lots of good folks here. But it’s different from the very friendly and laid-back life of Austin.”

Southern cooking is another aspect missed by many who move north.

“Tennessee natives embrace comfort food and there is nothing better than Tennessee barbecue,” Curtis Barnes says.

YEE HA! The Best Things About Living in the South.

Moving to the North also means investing in wardrobes that include multitudes of jackets, knit hats, snow pants, boots, gloves, mittens, sweaters, fleeces, long underwear, scarves, hand-warmers and spiky treads for shoes. You’ll need a new arsenal of tools such as ice scrapers, snow brooms, pet-friendly ice melter, road salt, snow tires and snow shovels (no, you don’t use a garden shovel to clear the snow, as one southern transplant learned). You also quickly learn about winter street-parking bans, how to drive in snow and ice, and how to remain serene when municipal snowplows leave heavy piles of snow at the end of your driveway.

“When you live in the South, you don’t know what a roof rake is,” Carolyn Barnes says. “But when you have several feet of heavy snow on the roof of your house, you quickly learn these things.”

While he appreciates the very distinct seasons in the North, Mike Barnes says he misses spring in the South and year-round golf.

“Spring is such a delightful time in Tennessee,” he says. “April is a very cruel month in New England! I’m always hoping/expecting it will be warm, but usually we still have snow on the ground almost until the end of the month.”

The Barnes and Trabulsi-Orr families say the adjustment to a new place is smoother if you get to know your community. The Barnes family quickly made friends through the boys’ soccer teams, Curtis’ musical endeavors and university gatherings. Curtis, now a student at the University of Massachusetts, is in a band with a friend he met when they were fifth-graders in an Amherst orchestra.

In the North, where it’s easy to fall into “hibernation mode” during the colder months, Carolyn Barnes says it’s important to get out and see what your new community has to offer. Volunteer, visit local shops, or join a community group or exercise program. Other southern transplants say you can meet your new neighbors through community gardens in the growing season.

While the North isn’t as well-known for its hospitality, newcomers can make lasting friendships with a little bit of effort.

“We have met families through our kids’ schools and through work,” Allison Orr says. “We go to school potlucks and family gatherings.”

Although there was a transition period to life in the North, the Barnes family say New England is home and they plan to stay.

“The entire region is a charming place,” Mike says. “The landscape, farms, town centers and walkability almost everywhere are really pleasant changes from where we came from.”

The Trabulsi-Orr family must move back to Austin after Allison’s position at Wesleyan ends, but they say they will miss life in New England and will return to visit.

“We love the terrain — all the trees, rock formations, coast lines of New England,” Blake says. “We like the proximity to other cities, towns and states. We take lots of weekend and day trips to places like New York City, Montreal, Rhode Island and Maine. And we love experiencing actual seasons in the North.”

“Living in New England is comfortable and quaint and fun. I love the walkability factor of Amherst and the focus on education. There are not many places left in our country that still look like they did a couple hundred years ago — history is cherished and preserved here.”