"Ghost stories are a way for a place to give an identity to itself." 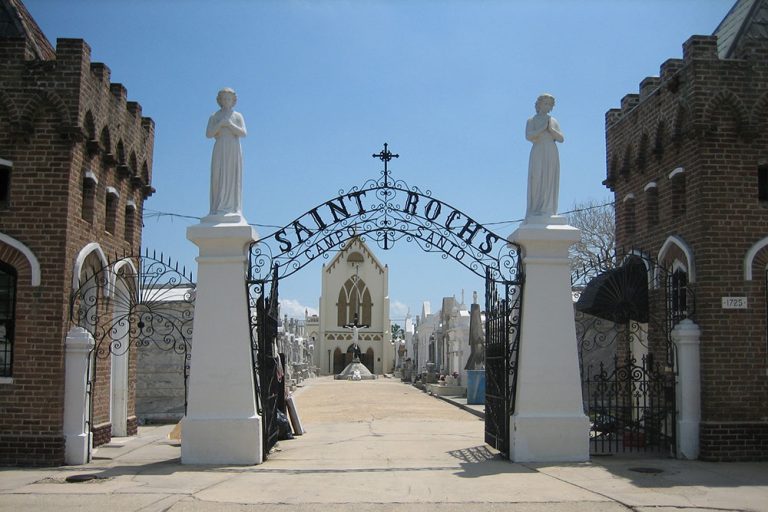 In his fantastic book, “Ghostland: An American History in Haunted Places,” author Colin Dickey embarks on a ghost-hunting road trip across the country. He visits abandoned prisons, haunted houses, decrepit asylums, cemeteries, hotels and hospitals in search of the paranormal stories that have captivated (and terrified) us for generations. In the process, he uncovers not only some seriously spooky tales, but America’s “hidden history” – the hard truths lurking beneath the surface of the scary stories we tell ourselves.

We got the chance to talk to Colin about how hauntings can define a city, the real reasons we’re obsessed with ghost stories, and (of course) his personal favorite haunted places.

What can we learn about a place from studying its ghost stories and folklore?

You know, for me, I always think of ghost stories as revealing of the things that we may not be able to talk about in other ways. One of the things I talk about in the book is the haunted Indian burial ground as being a ghost story that gets told over and over again, particularly in North America, as a way of maybe addressing the white appropriation of indigenous land, but approaching it in an oblique way without ever directly addressing it. I think a lot of ghost stories function in similar ways. They allow us to connect to a part of our history that we don’t know how to talk about or don’t want to talk about.

Do certain areas of the country seem to have more ghost stories than other places?

Initially, I thought so. I assumed East Coast places would have many more than the West Coast just given the fact that there’s a history there that stretches back longer. But I found that not to be the case at all. I found that a city like Los Angeles, which is much younger than a city like Boston, has as many ghost stories as Boston or New York. I found that any city, any town in the country will find these ghost stories and I think what that’s about is they’re one way for a place to give an identity to itself.

Can you talk a little more about that? How do ghost stories contribute to a place’s identity?

At Livability, we talk a lot about economic development, and I was curious about how ghost stories, hauntings and local folklore might intersect with a city’s economic success – tourism, branding, etc. In other words, can ghost stories be good for business?

There’s definitely been a boom in ghost tours. When I was younger they were around, but only a city like New Orleans would have regular ghost tours; now you’re seeing them more and more. I think for many people ghost tours are a way of engaging in a town’s history or a city’s history in a way that seems a little bit more fun or exciting. They want to know the history but they don’t want to go to the historical society and look through a bunch of old newspapers. Ghost tours are an economic engine in that they provide another way for tourists and locals to engage with history and see a town in a slightly different manner.

That’s one way, and then another way that I was surprised to find is that, in some cases, ghost stories become a means of keeping an otherwise threatened building alive – for example, a historic building that is in a high real estate areas where there’s a lot of interest in development. Maybe contractors would like to replace that building with high-rise condos or a shopping mall, but ghost stories can be a way of providing both revenue and awareness that a building is an integral part of that community and economically sustainable. A place like Winchester Mystery House is one of those places. It’s in an incredibly valuable part of San Jose in terms of real estate value, and yet it’s kept alive because of its reputation as being the most haunted house in America.

Is there a right and a wrong way for a town to leverage its ghost stories? Many of these stories come out of seriously dark histories, so how does a respect for that fit into this equation?

Certainly I came across a lot of stories that were just factually inaccurate and I think that happens a lot. So sometimes it’s just a matter of making sure the stories are rooted in history. Don’t just go with whatever urban legend or folklore gets handed down, or at least make that explicit when you’re telling the story, and say, “There’s a legend about this, this is how it’s been told for decades, but it turns out to be not historically accurate.â€ Just be as forthright as you can about the historical record that’s being reconstructed. And I think there’s another angle that’s about being aware of how you’re telling these stories, particularly the ones that involve traumas of some kind.

One of the places I went to in the book is a park in Portland, Oregon that’s haunted by a woman who was murdered there in 1949, a teenage girl who was abducted. Kids love to go there and tell the story and scare each other. But that girls’ younger sister is still alive, and this is obviously not a fun ghost story for her, this is something that deeply shaped her, her childhood and her relationship with her mother.

The thing about ghost stories is they do tend to revolve around traumas, murder and other violent acts, so it’s worth giving thought to what we’re saying about them and how we’re telling them and not simply just trying to maximize the scares and the spook factor. Give some thought to the historical weight of a community’s past trauma.

What I find fascinating about America is that it’s constantly reshaping and rewriting its history, and I think that process is ongoing. Facts are facts, but how we tell those stories and how we shape that narrative matters.

I grew up in San Jose, so the Winchester Mystery House will always be special for me personally because it is so strange – this 160-room Victorian labyrinth that goes in all directions without rhyme or reason. It’s such a magical, wonderful place to be in.

Next, I’d say New Orleans because more so than other cities, they embraced this haunted legacy early on, and it reflects an ongoing and constantly evolving storytelling tradition. I think of all the cheesy tourist ghost tours I’ve taken in cities around the country, the ones in New Orleans are told by these fantastic raconteurs who genuinely love their city. Even if the history isn’t always 100% accurate, it reflects a real love for the place.

And finally, I love haunted asylums – Thomas Kirkbride buildings that were built to represent a stately victorian mansion that would be welcoming and enticing to its patients and their families who were footing the bill. And over the years as those asylums fell into disrepair and psych treatment changed, they went from being welcoming and safe-feeling places to the paragon of the terrifying and dangerous asylum that developed a reputation for being haunted.