How to Brew Up a Great Downtown 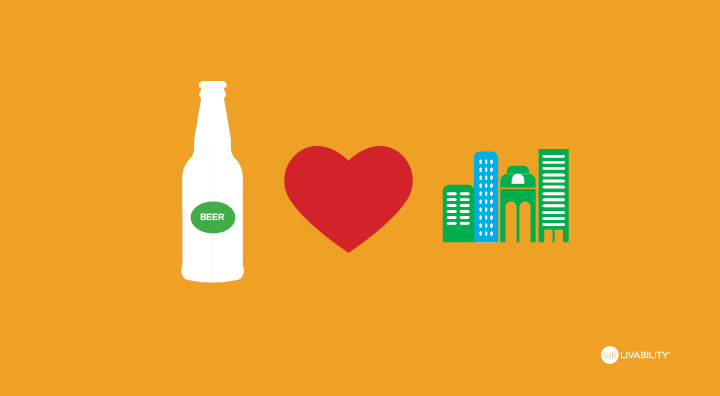 Frances Willard must be rolling in her grave. It was in Evanston, Illinois, that she co-founded the Women’s Christian Temperance Union back in the late 1800s. This group championed prohibition and lobbied hard for the passing of the 18th Amendment, which banned the sale of alcohol. Yet, if you walk down Evanston’s streets today you’ll find a number of taprooms including the ironically/aptly-named Temperance Beer Co.

Nearby Oak Park, Il. gave out its first liquor license, only forty or so years ago – to a church. It wasn’t until 1979 that any businesses could serve liquor. To this day there is no licensed “tavern” in town. Establishments have traditionally served food in order to have a liquor license. But all of that is about to change.

In 2015, the Village along Chicago’s Western border expects its first brewpub to open as well as a nano-brewery complete with taproom.

The craft beer movement is gaining steam in the U.S. In 1990, there were just a few hundred craft brewers in the U.S. – mostly small with limited distribution. Now there are more than 4,000, according to the Brewers Association and as many as 1,700 will join the market soon. On their own, they’re still small but together a 2014 report showed that the craft industry combined to outsell behemoth Budweiser. Craft beer now accounts for one in 10 beers sold and while overall industry sales and production are flat, craft beer is posting double-digit growth. Perhaps most importantly, these businesses are succeeding. According to the Brewers Association in 2014 there were only 46 brewery closings compared to 615 openings.

What does this have to do with livability? Turns out quite a bit. Coast to coast cities of all sizes are embracing the craft beer movement as a way to promote tourism and local business. In the past year leading up to our 99 Bottles in 99 Cities list, Livability has talked to several mayors about the role of craft breweries in their downtowns. The cite the tourists it brings in, the foot traffic in downtown that support local businesses and its role as a much-sought-after amenity for the Millennial workforce.

Santa Rosa, California, as the urban center of Sonoma County is best known for its wine. But the downtown had its issues. “We went thru a period of decline,” said former mayor Scott Bartley. “But if you look at our downtown it’s becoming more of an entertainment and dining area. There’s still a focus for offices. But restaurants are taking over.” One of the establishments he credits for helping turn around the downtown is the Russian River Brewing Co. which creates the famed Pliny the Younger. During its limited period of release, beer enthusiasts line up around the block for a chance to sample it.

A recent study showed in a given week, more than half of Millennials are looking to try a new beer. Millennials, especially those with disposable income, are a demographic that both cities and brewers are looking to attract as customers, residents and workers. That has brewers and cities working more closely to achieve mutual goals because breweries don’t open by accident.

Boulder Colorado has a long-established craft beer culture that mayor Matt Appelbaum sees as important to the vibe of the downtown and the economic success of the Pearl Street Mall and other areas. “You build up a critical mass. You become a destination but you also have people in place who can help each other out and you can attract the best talent because they know there are many places to go to. Did the city make that happen, maybe not directly but maybe we created the context and the environment for it.”

How does a city create that context? First it requires recognition of what’s at stake. Asheville mayor Esther Manheimer said, “When I came to Asheville, arts and beer were considered a hobby. It wasn’t part of the economy. Now it is very much a part of the economy. If you ask someone in their 20s they’ll say ‘everyone comes here for the beer.’” In addition to its own home-grown breweries, established brands from around the U.S. like Sierra Nevada and New Belgium have opened plants and tasting rooms in Asheville. A yeast-producing company located there to serve the local market.

It also requires a willingness on the part of cities to try new things. For Oak Park, that entailed new zoning uses. After years of success with the annual Oak Park Micro Brew Review event, it was clear that there was a market for craft beer in the Village. The local economic development group started getting calls from interested brewers. “It’s a policy issue,” said economic development manager Viktor Schrader. “You have to have the leadership on board.”

The Village added new categories to its zoning to allow for the brewpub, nano brewery and what it calls a “beer lounge” – think coffee shop but with beer to sample on the premise or take home. The goal for Oak Park and other cities is the same. As more residential development happens downtown – Oak Park has several multi-use, transit-oriented high rises in the works – have an infrastructure in place to support Millennials and their quest for good beers in great downtowns.

“It turns us from a 12-hour into an 18-hour economy,” said Mr. Shrader. “It’s great to go out on a Friday night to a place like [local beer-focused, farm-to-table restaurant] the Kinderhook Tap and see young people mingling. That’s something that’s been foreign to Oak Park.”