How to Love Where You Live: Don’t Let the Shark Eat Your Town

What can we learn from "Jaws" about protecting and bettering the places we live? A lot, actually. 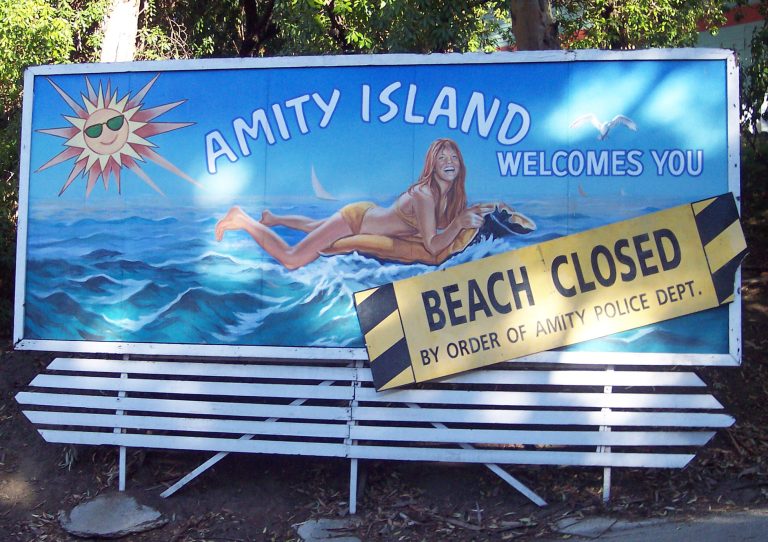 Courtesy of Ewen Roberts from California under a CC 2.0 license.

On Amity Island, the sun always shines. Everyone knows your name. Parades break out spontaneously on the main street. So charming, so joyful is Amity that once you visit as a sunscreen-slicked beach-goer you’ll spend the rest of your life plotting ways to return. A spot high on Livability’s Top 100 Best Places to Live list is practically guaranteed.

Two problems: Amity Island is fictional. And Amity Island has a little shark problem. As the setting for the 1975 Steven Spielberg classic “Jaws,” an old favorite of mine with which I traumatized my family recently, Amity and its denizens are as much a part of the movie as the (mechanical) shark itself. This story isn’t just man vs. shark. It’s place vs. shark.

When police chief Martin Brody wants to close the beaches to stave off further shark attacks, smarmy Mayor Vaughn demurs. “I’m only trying to say that Amity is a summer town. We need summer dollars. Now, if the people can’t swim here, they’ll be glad to swim at the beaches of Cape Cod, the Hamptons, Long Island…”

Economic worries trump common sense for a while. Then the shark dispatches a few more bathers and the police chief intones, “Larry, the summer is over. You’re the mayor of ‘shark city.'”

After repeated viewing of “Jaws” as a teenager, I’m still prone to a once-a-year shark nightmare. But since writing This Is Where You Belong, I see the big, bad aquatic animal as a metaphor for the nasty problems that want to destroy your town. My town. All the towns.

No matter where you live, your community has its version of a great white shark. Generally speaking not an actual shark, but maybe crime waves, controversial development projects, local corruption, natural disasters and other issues with menacing teeth that rise from the deep to instill fear, doubt and division among residents and city leaders.

How? When something awful happens in your community, you have a few choices: You can leave. You ignore it (but it’ll keep eating small children at the beach). You can live with the reduced quality of life (no more swimming because of aforementioned eating). Or you can take action.

Consider, for instance, a series of earthquakes in The Netherlands that were driving people from their hometown with “the threat of physical harm, financial ruin, disruption of social networks and loss of personal control.â€ (Cue the “Jaws” music.)

According to researchers at the Delft University of Technology, residents who loved where they lived were more willing to stay in the risky place, as well as more eager to take action to improve or protect it. Those strong emotional bonds lead people to clean up beaches after oil spills, plant trees in the wake of a tornado, or demand increased transparency from government leaders.

How to Love Where You Live: Wave Your Sign

What do they do with a man-eating great white shark in Amity? They get on board the rickety Orca to hunt it down. Disasters of all kinds happen to places big and small, all over the world. But they don’t have to be a reason to abandon hope – or your hometown.

Should I mention that another shark torments Amity Island in “Jaws 2”? That’s also a metaphor for what happens in towns. And that’s okay. Maybe you just need a bigger boat.