The beekeeping trend continues to grow, and not just in rural places 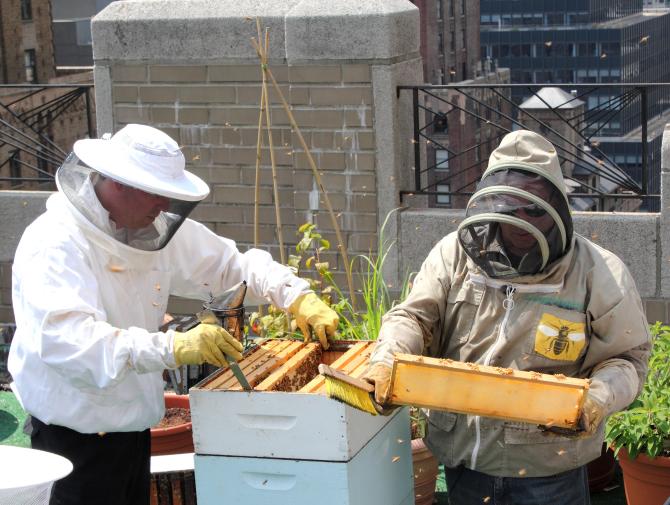 Director of Culinary for the iconic hotel, Garcelon wanted fresh herbs, vegetables and homegrown honey for his menu. So in 2012, as raised gardening beds were installed on the roof, so were six neat honeybee hives. Today, those hives are home to about 360,000 bees, which pollinate trees and flowers within a 3-mile radius of the hotel. In July 2014, they produced a harvest of 180 pounds of a light, “minty herbal” honey.

Bees and the City

“Bees are not really all that challenging,” Garcelon says. “You need to have professional help to make sure you don’t have a swarm in the spring, and you need to check them regularly to make sure they’re healthy. But bees are not dangerous unless you’re threatening them. They have no reason to sting you unless you’re threatening their hive or their queen.”

Garcelon says his guests, far from being fearful, love the bees, which are featured on special historic tours of the hotel. And a jar of Waldorf honey is a prized souvenir.

Farther downtown, Manhattan’s Battery Park is also home to several hives, which are decorated to look like the homes of the city’s early Dutch settlers and maintained by community volunteer beekeepers. Chicago’s City Hall rooftop hives contain 160,000 bees, and O’Hare Airport’s 75 hives support more than 1 million vital pollinators. The White House even has its own “first bees,” who contribute honey to presidential dishes.

The A-Z of Bees

Why all the buzz about bees? Well, for starters, honey bees pollinate more than 100 different food plants, or about one in every three bites of food we eat, and their pollination has an annual impact of $15 billion on the American economy. Without them and other pollinators, such as native bees, butterflies, hummingbirds and bats, agriculture would be heavily compromised.
Alarmingly, in the past six or so years, pollinators have been disappearing.

Honey bees in particular, have fallen victim to Colony Collapse Disorder, a mysterious syndrome that has led to annual bee mortality as high as 36 percent. In 2013-14, the USDA reported a mortality rate of 23.2 percent from all causes, an improvement, but still dangerous enough that President Obama launched a task force in June 2014 to take steps to restore pollinator losses and improve their health.

“We all have a role to play in helping pollinators,” says Phyllis Stiles of Asheville, N.C., director and founder of Bee City USA, which works with communities around the country. “The joke is we want people to be more PC – pollinator conscious. We encourage city leaders to support efforts in their communities, and we work hand in hand with the cities to make policies more pollinator friendly.”

Asheville became the first official Bee City in 2012. Talent, Ore., has become the second, with a raft of other cities, including several major American urban centers, in the process of applying, Stiles says.

“We want to have the same kind of success as Tree City USA had in raising awareness of the importance of the urban tree canopy,” Stiles says. “We want cities to realize they can play a huge role in the survival of pollinators.”

“The joke is we want people to be more PC – pollinator conscious.”