Seven Tips for Sharing the Road With Bikers

May is National Bike Month. Here are seven tips to keep in mind as you share the road. 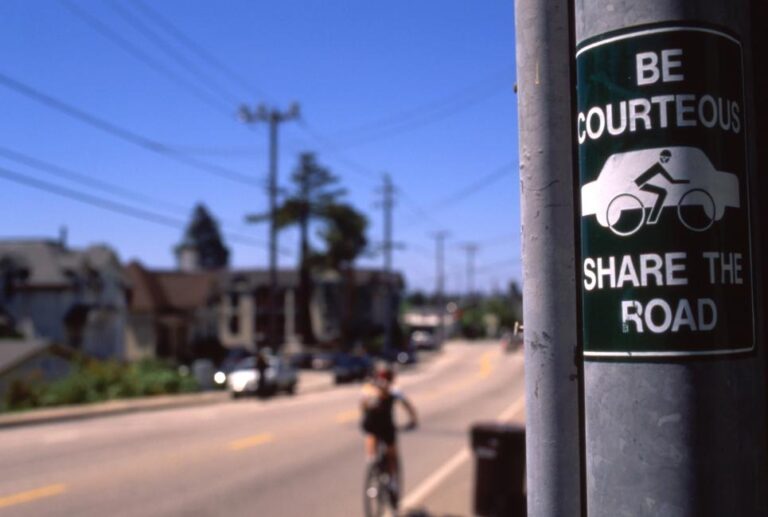 May is National Bike Month, and with cyclists out in force – work commuters, schoolchildren, exercisers, errand-runners – it’s vital for motorists to share the road well with their two-wheeled counterparts.

Some cities and towns are known for their dedicated bike lanes, others are retrofitting roads to include such lanes, and still others have no cycling provisions. Whatever the circumstance, cyclists need motorists’ help to arrive safely. Guided by common sense, here are seven tips to keep in mind:

Understand that bicycles legally are able to navigate roads just as vehicles do; they’re not required to ride on the shoulder or between the gutter and the lane. “Bicyclists already have a complete right to the entire road,” says Kirby Beck, a former police officer and bike-safety consultant based in Minnesota.

The same carelessness that causes many car-on-car collisions also leads to collisions with bikes – often with more disastrous results. In a nutshell: keep your eyes on the road, be alert, obey traffic signs and signals, don’t text while driving, and avoid other multitasking activities.

Be on alert when approaching intersections, which statistically carry the most dangers for cyclists. Even when bike lanes are present along the sides of roadways, “they end where they intersect with other roads, and that’s where the problems really happen,” Beck says. Make right and left turns with extra caution, yielding to bikes before completing your turn.

4. Watch for little ones.

“Children on bicycles are often unpredictable – expect the unexpected and slow down,” advises South Carolina’s Palmetto Cycling Coalition. “Most children don’t have adequate knowledge of traffic laws, and children are harder to see because they are typically smaller than adults.” Be sure to obey school-zone speed limits and crosswalk signs.

“Motorists must at all times maintain a 3-foot clearance when passing a bicyclist,” according to Minnesota’s Share the Road guidelines. The so-called “3-feet rule” – a law in many states – is a sound one, but pass cyclists with even more room if possible, and give them as wide a berth as possible.

Before you pull out of an alley, driveway, parking lot or other area that calls for entering the flow of traffic, look carefully – the old “left, right and left again” approach can be effective in these cases – and yield to a cyclist crossing your path.

Movies such as Steve Martin’s The Pink Panther have drawn laughs with this one, but in real life there’s nothing funny about collisions caused by opening a car door without looking to see who might be peddling alongside. Since many cities are adding bike lanes between the main lanes and the parallel-parking lane, this is an especially timely reminder.

In short, motorists and cyclists must be on guard as they share the road. “When we all try to do what’s right and watch out for each other, things go much better,” bike-safety consultant Beck says.