Traffic roundabouts save lives and gas, but they're still new to many Americans. Learn how to navigate a roundabout with ease. 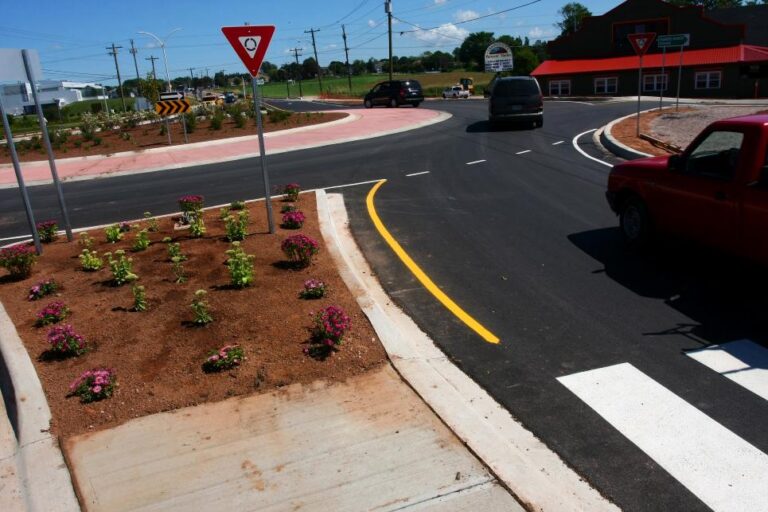 Approaching a roundabout for the first time feels like learning to drive all over again. Instead of stopping at a light or stop sign at the intersection, you follow a circular road counterclockwise without stopping.

Roundabout expert Bill Baranowski says there are more than 3,700 of the circular traffic control layouts in the U.S., and they're spreading into more and more new cities and towns.

Carmel, Ind., jumped on the roundabout bandwagon back in 1997 after Mayor Jim Brainard was impressed with them on a trip to England, where they’ve been popular since the 1960s. Now Carmel has 70, more than any other city in America. Roundabouts are big in Utah, too, where there are some 180 in various cities.

Roundabouts have been slow to spread across the U.S. Confusing old-school traffic circles in New Jersey and other places soured some drivers on the concept. For instance, Columbus Circle in New York City and DuPont Circle in Washington, D.C., are traffic circles with stoplights in their midst. But these are different than a real roundabout.

The European-style roundabout governed by rules of civility keeps the traffic flowing. That means fewer accidents and less pollution from idling vehicles.

Here’s some advice from experts in Carmel on how to avoid a car wreck in a roundabout:

Don’t be a Griswold

In the movie European Vacation ugly American Clark Griswold was confused by a multilane roundabout in London, circling almost till the car ran out of gas. Do what Clark didn’t: turn your signal on, check your mirrors and make a move to get in the lane you need. If you’re going to make a turn from a multilane roundabout, it helps to get in the right lane before you enter the circle.

The curved lanes leading to the roundabout are designed to slow traffic. Let them do their job. Just because there’s no stop sign, you still need to be prepared to stop for people in the crosswalk or other traffic. It may be another driver’s first time in the roundabout.

Yield to the Flow

As you approach, yield to the traffic in the circle. You’ll see a yield sign and a dashed yield line on the roadway. Slow down, give pedestrians and bicyclists the right of way, and be prepared to stop. If there’s oncoming traffic from the left, give it the right of way. If it’s clear, move in to the traffic lane and around you go.

Making a left turn might be the scariest thing, driving three-fourths of the way around the circle to your street. But then again, you don’t have to wait for oncoming traffic to clear like at four-way intersection.

Keep Calm and Carry On

Don’t panic at your first roundabout. Slow down, follow the signs, use your mirrors. If the Europeans can figure this out, so can Americans.

Do roundabouts work? The Insurance Institute for Highway Safety estimated that roundabouts reduce all crashes by 37 percent compared to intersections with a traffic light, and crashes involving an injury by 75 percent. The roundabouts stop often-fatal T-bone crashes at right-angle intersections. In Carmel, the locals find that getting across town via a roundabout road goes much faster than waiting for the light to change.