Skip to content
Home > Love Where You Live > Students Choose an Alternative Spring Break: Helping Others 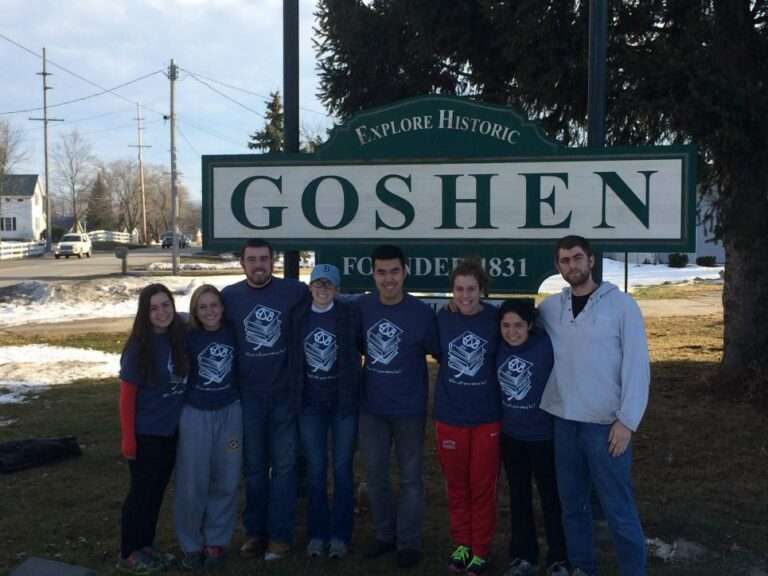 In case you were looking on the beaches of Fort Lauderdale during spring break, Boston University students Courtney Splaine and Dan Flanagan were nowhere to be found. They and six other BU students and one chaperone spent their spring break in Goshen, Ind., gutting an old furniture factory that eventually will be converted into an arts and enterprise center and affordable housing units.

Courtney and Dan’s group worked with LaCasa Inc., a nonprofit housing and community development organization serving Elkhart County, Ind. And while climbing ladders, swinging hammers and hauling load after load of pipes out to recycling containers may not be everyone’s idea of fun, student coordinators Dan and Courtney say they and their group had a blast.

“We didn’t really know going in exactly what kind of work we would be doing in the factory,” Dan, a sophomore, says. “What we did basically was pull out all of the piping – sprinkler pipes and wire piping – that lined the ceiling and the walls of the factory, taking down anything that wasn’t part of the structure.

“We did reflections at the end of each day, and when it’s a construction trip, sometimes the only thing at the end of the day might be, ‘Well, I pulled some stuff off the wall.’ But I was impacted by the people we worked with because everyone was so open and willing to share with us, but also they have this passion for LaCasa and what this organization is doing in Goshen, and this area that has been hit really hard by the recession. They have a ton of cool vision for the area.”

The trip to Goshen was senior Courtney’s third ASB.

“My sophomore year, I went to Memphis, Tenn., to work with St. Jude’s hospital. It had a big impact on me because it really sparked my interest and made me want to do community service when I came back. I got a lot more involved my junior and senior year. This was my first year being a coordinator, being more of a leader than just a volunteer,” she says. “Every year has been just phenomenal.”

BU’s Alternative Spring Break program has been around since the 1980s, when such programs first cropped up on college campuses. The movement has grown steadily over the years, to the point that many colleges and universities have institutionalized community service as an integral part of the college experience.

In 1991, two Vanderbilt graduates founded the national nonprofit organization Break Away: The Alternative Break Connection to provide training in the development of alternative break programs and connect campuses with communities through its network of chapter schools and nonprofit partners.