Skip to content
Home > Love Where You Live > Tales of Gentrification: What It’s Like to Be an Urban Pioneer

Tales of Gentrification: What It’s Like to Be an Urban Pioneer 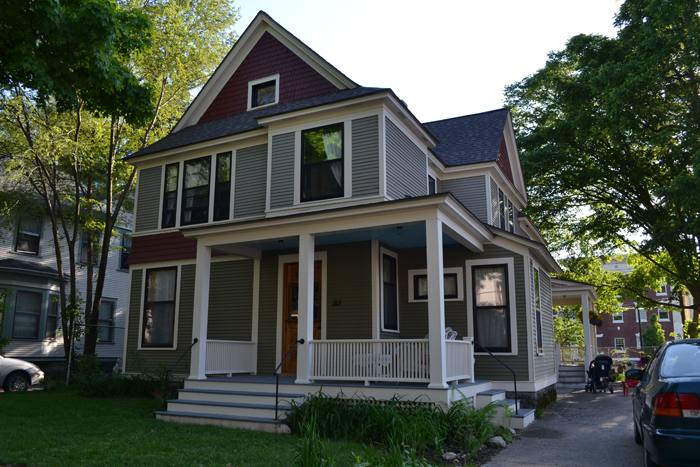 When Laura Tepper says that her neighborhood is considered part of Philadelphia‘s ‘Badlands,’ she’s not exaggerating. Drug users shot up on the street outside her house. Tepper’s husband was shot in the neck with a BB gun in their back yard. And the drugs and shootings weren’t the only adjustment.

“It’s been very traditional, Irish Catholic for a long time,” Tepper says. “We have a fourth-generation family living next door. It took a long time for the neighborhood to warm up to us. We felt like we had to be ingratiating; we had to prove ourselves.”

The Teppers are among a growing group of homeowners in the U.S. who opt to stay out of the suburbs and instead stake a claim in often downtroden, overlooked urban areas near the heart of metro areas. These ubran pioneers come looking for affordable homes and neighborhoods that offer a more authentic connection to their communities. But moving into what many of their friends and family members consider a “rough” part of town can be risky, not only financially, but physically. Many of these urban pioneers move to stagnant neighborhoods with the hope that they might spark change, leading to rising property values and a new wave of homeowners similar to themselves.

Involvement Changed It All

The term ‘Badlands’ goes back to the 1990s, more than a decade before Tepper and her husband left New York in advance of the waves to come and in search of an affordable place to buy a house. They wanted to live in Northern Liberties, but as the housing market boomed, they were priced out of there as well. So they looked one neighborhood north, in Kensington, home to one of the most notorious drug markets on the East Coast. They ended up between it and the interstate, in the heart of the Badlands. They spent many nights over their first few years in the neighborhood reconsidering their decision.

“We didn’t know what the day-to-day would be like,” Tepper says. “It was very tough.”

But they stayed, and they weren’t alone. Home prices in the eastern part of Kensington and neighboring Fishtown rose 100 to 200 percent, depending on the Census tract, from 2000 to 2013, and the proportion of residents with bachelor’s degrees rose by 15-20 percentage points. “There’s a new wave of people,” Tepper says. “New construction is going up – on our block there are four new buildings, three houses and one condo. The houses probably cost three times what ours cost.”

What kept Tepper there? As she got more involved in the neighborhood, she not only gained the trust of her neighbors, but she also learned more about the years of work they had put into the neighborhood and what kind of leverage its citizens had to change the places they lived. On a block that now has multiple new buildings going up, Tepper and her neighbors were able to get three drug houses seized by the city, a laborious, delicate process of assembling evidence to present to the police that took several years.

“We had a quiet network; we only communicated over email. We never spoke about it on the street,” Tepper says. “People set up cameras. It takes a lot of work; you have to have a lot of proof.”

One of the early signs of economic renewal led Tepper further into the life of her neighborhood. Its neighborhood association held its meetings at Philadelphia Brewing, which had moved to Kensington just a few years before Tepper.

“The cool thing about city government is that there are very active civic associations in each neighborhood. At the time, East Kensington Neighborhood Association had been run by the same people for a few years, and they wanted out,” she says. “We started going to meetings; they had them in a brewery and there was free beer. And we wanted to know where to complain about the bad parts. I joined the zoning committee and started to see the energy invested in turning it around. I saw people who had been doing it for years.”

Leaping Before They Looked

Like Tepper, Elizabeth Hoffman Ransford was priced out of the big city she lived in, Chicago; unlike Tepper, however, she headed for a city she knew well, her hometown of Grand Rapids, Mich. Her mother had even spent years working in historic preservation and economic renewal in the city. But their house was a different matter – she and her husband put in an offer on a foreclosed house sight unseen.

“There were already 14 bids on the house,” Hoffman Ransford says. “It was a Fannie Mae property, and everyone else would have been an absentee landlord, so we jumped to the top of the list.”

A long and expensive summer of renovations followed – they rebuilt the chimney, replaced the plumbing and electrical systems and poured cement to hold up one side of the house. The property itself was cheap, not least because they moved in 2010, before housing prices had rebounded. But the extensive work it needed was made possible, in part, by historic-district tax credits.

“It attracted us because it made it financially feasible,” Hoffman Ransford says. “We put in a lot of money, but it was also a labor of love. We wanted to make an impact on the neighborhood. The house was an eyesore. The neighbors thought it would be torn down.”

Having built a foundation, she built roots in the community the same way Tepper did, serving on the neighborhood association; Hoffman Ransford is its co-chair.

“It’s an opportunity to meet people and ask  them questions. What do you think about this? What do you want to change? It’s an entry into a conversation,” she says.

That conversation has focused on four things. The first and second are parks and a “complete streets” mentality with a priority on pedestrians and bikes. The third is related to the second – working with developers to build a livable community for the future, which includes greater density and affordability of housing. Younger residents in East Hills, according to Hoffman Ransford, have internalized these new-urbanist models, and those residents are represented in the neighborhood association. “I’m 38 [years old],” she says, “one of the oldest people on the board.”

The fourth focus is especially important to the mother of two: her neighborhood school. When she first looked at it, the school was in the second percentile of state rankings.

“I looked at it and thought ‘I guess our kids aren’t going,’” she says. The district wanted to tear it down, which went over badly in a historic district. But the district listened. “It was the beginning of a conversation,” Hoffman Ransford says. “What the neighborhood wanted really mattered to the district.” Neighbors, in turn, built a community garden at the school, painted its benches and improved the look of the school they wanted to preserve. A new principal attracted a passionate staff. Test scores started going up. The kindergarten class increased from 26 last year to 41 this year.

“The relationships that the neighborhood association were able to create translated into the neighborhood school becoming a place where we wanted to be,” Hoffman Ransford says. “It became a real passion for me. When I saw parents with kids, I’d ask, ‘have you heard of Congress School?’”

Those relationships can take years to forge, but the transformation can still seem sudden. “We went out on the first nice day after a cold winter and saw all these joggers, runners and strollers. We realized that was it,” Tepper says. “After that,  practically overnight, restaurants started opening, stores started opening. We thought, ‘okay, we can handle this.’”